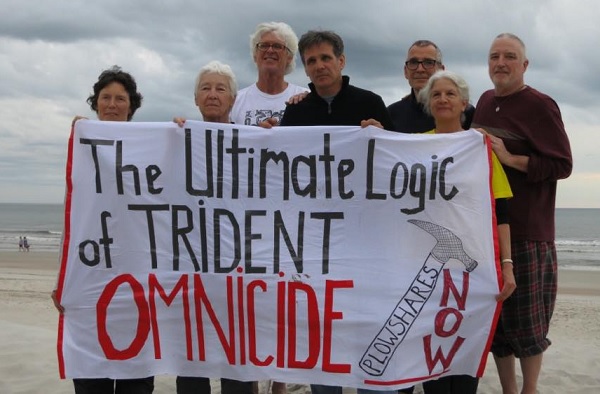 On April 4, 2018, the fiftieth anniversary of the assassination of the Reverend Dr. Martin Luther King, Liz McAlister, 78, Stephen Kelly S.J., 70, Martha Hennessy, 62, Clare Grady, 58, Patrick O’Neill, 62, Mark Colville, 55, and Carmen Trotta, 55, entered the Kings Bay Naval Submarine Base.  Carrying hammers and bottles of their own blood, the seven sought to enact and embody the prophet Isaiah’s command to: “Beat swords into plowshares.”  In so doing, they were upholding the US Constitution through its requirement to respect treaties, international law through the UN Charter and Nuremburg principles, and higher moral law regarding the sacredness of all creation. They hoped to draw attention to and begin to dismantle what Dr. King called, “the triple evils” of racism, militarism, and extreme materialism.
In an indictment filed this week in the Southern District of Georgia, Brunswick division, the seven were charged with four counts: Conspiracy, Destruction of Property on a Naval Station, Depredation of Government Property, and Trespass. They will appear before a magistrate in Brunswick on May 10th.  Although currently being held at the Camden County jail in Woodbine, Georgia, they expect to be acquitted of all charges. Attorney William P. Quigley, Professor of Law at Loyola University, New Orleans, LA, noted, “These peace activists acted in accordance with the 1996 declaration of the International Court of Justice that any threat or use of nuclear weapons is illegal.” Martha Hennessy, the granddaughter of Dorothy Day, responded from Camden County jail with the observation that, “the real conspiracy lies with those create unparalleled onmicidal weapons that violate national and international law.”
Kings Bay Naval base opened in 1979 as the Navy’s Atlantic Ocean Trident port.  It is the largest nuclear submarine base in the world.  The Kings Bay Plowshares hope to draw attention not only to the threat of nuclear annihilation posed by the weapons aboard the submarines whose homeport is Kings Bay, but to emphasize how the weapons kill every day. Clare Grady wrote from Camden Country jail, “We say, ‘the ultimate logic of Trident is omnicide’, and yet, the explosive power of this weapon is only part of what we want to make visible. We see that nuclear weapons kill every day by their mere existence. We see the billions of dollars it takes to build and maintain the Trident system as stolen resources, which are desperately needed for human needs.” In response to news of the indictment, Mark Colville, of New Haven, Connecticut, wrote from the Camden County Jail, “Once again the federal criminal justice system has plainly identified itself as another arm of the Pentagon by turning a blind eye to the criminal and murderous course from which it has repeatedly refused to desist for the past 70 years.”
For more information contact:
Jessica Stewart: 207.266.0919
Paul Magno: 202.321.6650
Or visit their website at kingsbayplowshares7.org or their Facebook page: Kings Bay Plowshares.