The U.S. House of Representatives passed an amendment to the “National Defense Authorization Act” introduced by Congresswoman Ilhan Omar requiring that the U.S. military provide Congress with the cost and the supposed national security benefits of every foreign military base or foreign military operation. World BEYOND War had flooded Congressional offices with the demand for Yes votes.

Now, as the House and Senate reconcile their two versions of the bill, they need to know that we want this amendment left in it. 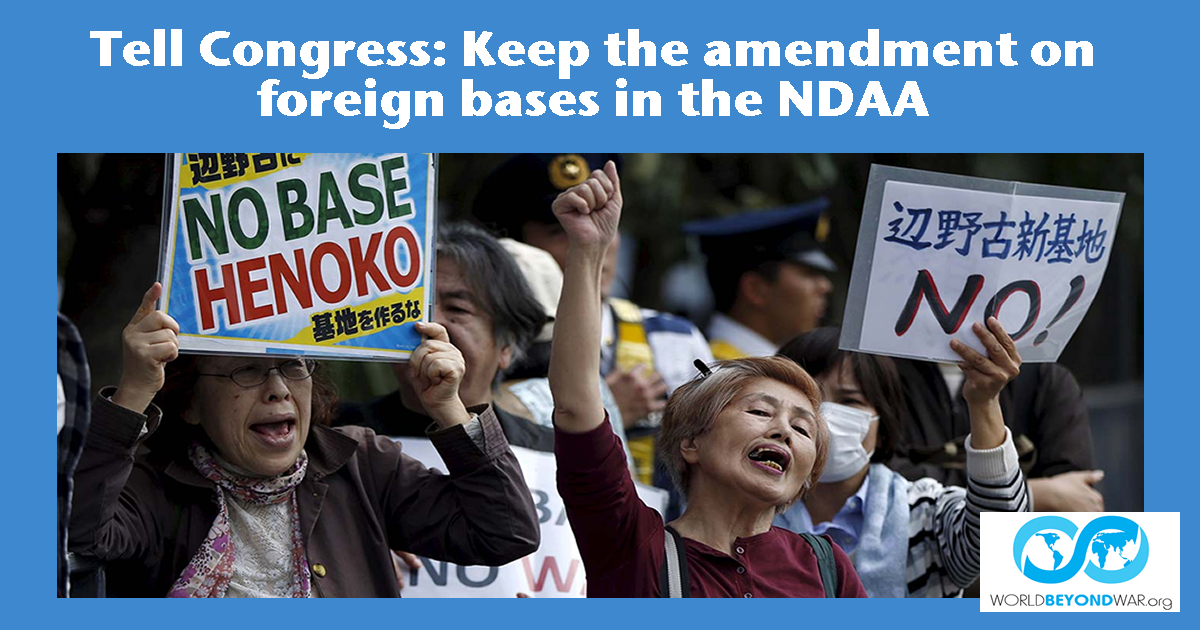 Here is the text of the amendment as passed:

In this video from C-Span, at 5:21, Rep. Omar makes the case for a need to justify foreign military bases, not just blindly fund unlimited and unknown empire. At 5:25 Rep. Adam Smith makes the case as well. One of their colleagues argues in opposition, but it’s difficult to find coherent meaning in what he says, and it’s hard to imagine what a persuasive case could be for the 210 No votes recorded. What could be the advantage of coating the globe with military bases without bothering to know what each one costs or whether each one plausibly makes you safer or actually endangers you?

The closing of U.S. bases and the removal of U.S. military personnel are critical to the elimination of war.

The United States has more than 150,000 military troops deployed outside the United States on more than 800 bases (some estimates are more than 1000) in 160 countries, and all 7 continents. These bases are the central feature of U.S. foreign policy which is one of coercion and threat of military aggression. The U.S. uses these bases in a tangible way to preposition troops and weaponry in the event they are “needed” at a moment’s notice, and also as a manifestation of U.S. imperialism and global domination — a constant implicit threat. Additionally, because of a history of military aggression, countries with U.S. bases are targets for attack.

There are two principal problems with foreign military bases:

The closing of U.S. foreign military bases in particular (they make up the vast majority of all foreign military bases) would have a significant effect on global perceptions, and represent a massive shift in foreign relations. With each base closure, the U.S. would become less of a threat. Relations with host countries would be improved as the base real estate and facilities are rightfully returned to local governments. Because the United States is far and away the most powerful and aggressive military in the world, the closing of foreign bases would represent an easing of tensions for everyone. If the U.S. makes such a gesture, it may induce other countries to address their own foreign and military policies.

In the map below, every color but gray indicates the permanent basing of some number of U.S. troops, not counting special forces and temporary deployments. For details, go here.