In an era of Climate Collapse, Canada is Doubling Down on Military Spending 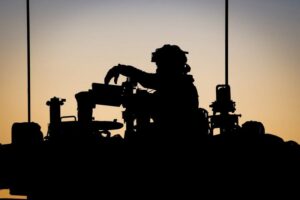 Canada is earmarking billions for defence over the next five years as part of its newly announced budget. This will cause annual military spending to double by the late-2020s. Photo courtesy Canadian Forces/Flickr.

The latest federal budget is out and despite all the media bluster about new progressive housing policy—which consists mostly of a new tax-free savings account for home buyers, an “accelerator fund” for municipalities to incentivize gentrification, and meager support for Indigenous housing—it should be understood as a clear entrenchment of Canada’s position as a global capitalist, colonial, and imperialist power.

There’s no better example of this than the Trudeau government’s plan to significantly boost military spending by nearly $8 billion, on top of billions in already scheduled increases.

But according to Canada’s new budget, the “rules-based international order” is now “facing an existential threat” due to the Russian invasion of Ukraine. As a result, the Liberals are committing to spend another $8 billion over the next five years, which when combined with other recent pledges will bring total Department of National Defence (DND) spending to over $40 billion per year by 2026/27. This means that annual military spending will have doubled by the late-2020s.

Specifically, the new budget earmarks $6.1 billion over five years to “reinforc[e] our defence priorities” as part of a defence policy review, almost $900 million for the Communications Security Establishment (CSE) to “enhanc[e] Canada’s cyber security,” and another $500 million for military aid to Ukraine.

For years, Canada has been under pressure to increase its annual military spending to two percent of its GDP, which is the entirely arbitrary figure that NATO expects its members to meet. The Strong, Secure, Engaged plan of 2017 was explicitly discussed by the Liberals as a means to increase Canada’s contribution, but in 2019, then US President Donald Trump described Canada as “slightly delinquent” for only hitting roughly 1.3 percent of GDP.

However, as Ottawa Citizen journalist David Pugliese has noted, this figure is a target—not a treaty agreement—but “over the years this ‘aim’ has been transformed by DND supporters to a hard and fast rule.” According to a recent report by the Parliamentary Budget Officer, Canada would need to spend between $20 billion to $25 billion more per year in order to meet the two percent mark.

Media coverage in the weeks leading up to the release of the federal budget featured a nearly non-stop rotation of Canada’s most notable war hawks—Rob Huebert, Pierre Leblanc, James Fergusson, David Perry, Whitney Lackenbauer, Andrea Charron—calling for increased military spending, especially for Arctic defence in anticipation of supposed threats of invasion from Russia or China (the 2021 budget already committed $250 million over five years to “NORAD modernization,” including maintaining “Arctic defence capabilities”). Media coverage about Arctic defence barely included any perspectives from anti-war organizations or Northern Indigenous peoples despite the Inuit Circumpolar Council’s clear and long-standing demand for the Arctic “remaining a zone of peace.”

In fact, even with the new $8 billion in spending—on top of the enormous boost via the Strong, Secure, Engaged plan and subsequent increases—media outlets are already framing it as a failure as “Canada will remain far short of NATO’s spending target.” According to CBC, Canada’s new spending commitments will only push the figure from 1.39 to 1.5 percent, roughly equivalent to Germany or Portugal’s spending. Citing David Perry, the president of the Canadian Global Affairs Institute, a think tank that is “heavily funded by arms manufacturers,” the Globe and Mail absurdly described the $8 billion funding increase as “modest.”

All of this came only a week after Canada announced that it was reversing course and finalizing a deal with Lockheed Martin to buy 88 F-35 fighter jets for an estimated $19 billion. As Canadian Foreign Policy Institute Director Bianca Mugyenyi has argued, the F-35 is an “incredibly fuel intensive” aircraft, and will cost two to three times the purchase price over its lifetime. She concludes that procuring these highly sophisticated stealth fighters only makes sense with “a plan for Canada to fight in future US and NATO wars.”

The reality is that, like policing, no amount of funding will ever be enough for the war hawks, arms manufacturer-funded think tanks, or DND shills who are afforded reams of space in the mainstream media.

As Brendan Campisi wrote for Spring, since the start of Russia’s invasion, Canada’s ruling class has consistently emphasized that “the world is now a more dangerous place, and in order to respond to this threatening reality, the Canadian military needs more money, more and better weapons, more recruits, and a larger presence in the North.” Because of Canada’s increasingly active role in global imperialist aggression, threats can and will be perceived everywhere, meaning that the $40 billion in annual military spending by 2026/27 will inevitably be regarded as far too low.

Canada’s growing role in producing, exporting, and consuming fossil fuels (now legitimized with carbon capture subsidies) will only further endanger the world due to catastrophic climate collapse, particularly in the Global South, leading to unprecedented levels of climate-induced migration; with the recent exception of white refugees from Ukraine, the country’s anti-migrant approach will continually ratchet up racist and especially anti-Black hostilities. This trajectory of rapidly increasing military spending will undoubtedly contribute to far greater military investments in other countries, as well.

While voting against a Conservative motion to boost military spending to two percent of GDP as requested by NATO, the NDP has pledged support to Liberal budgeting until mid-2025 through its recent supply and confidence agreement. This means that regardless of posturing, the New Democrats are willing to trade a mediocre means-tested dental plan and the future possibility of a national pharmacare program—naively believing that it won’t be butchered by the Liberals—for far greater resources for Canada’s military. In late March, the NDP’s own foreign affairs critic described the military as “decimated” and said “we have not provided the tools that our soldiers, our men and women in uniform, need to do the jobs that we’re asking them to do safely.”

We cannot trust the NDP to lead or even support a genuine anti-war effort. As always, this resistance must be organized independently, as is already well underway by the likes of Labour Against the Arms Trade, World Beyond War Canada, Peace Brigades International – Canada, the Canadian Foreign Policy Institute, the Canadian Peace Congress, Canadian Voice of Women for Peace, and the No Fighter Jets Coalition. Further, we must continue to work in solidarity with Indigenous peoples resisting ongoing settler-colonial occupation, expropriation, underdevelopment, and violence.

The demand must continue to be an end to capitalism, colonialism, and imperialism. The incredible resources currently spent on sustaining global racial capitalism—via military, police, prisons, and borders—should be immediately seized and reallocated to rapid emissions reductions and preparing for climate change, public housing and healthcare, food security, harm reduction and safe supply, income supports for people with disabilities (including long COVID), public transit, reparations and return of lands to Indigenous peoples, and so on; crucially, this radical transformation much happen not only in Canada but worldwide. The latest commitment of $8 billion more to the military is utterly antithetical to these goals of promoting real safety and justice, and must be fiercely opposed.

James Wilt is a freelance journalist and graduate student based in Winnipeg. He is a frequent contributor to CD, and has also written for Briarpatch, Passage, The Narwhal, National Observer, Vice Canada, and the Globe and Mail. James is the author of the recently published book, Do Androids Dream of Electric Cars? Public Transit in the Age of Google, Uber, and Elon Musk (Between the Lines Books). He organizes with the police abolitionist organization Winnipeg Police Cause Harm. You can follow him on Twitter at @james_m_wilt.