Additional photos and video are available to download here.

OTTAWA — Hundreds of people have blocked access to the opening of CANSEC, North America’s largest weapons and “defense industry” convention at the EY Centre in Ottawa. 40 foot banners saying “Blood On Your Hands,” “Stop Profiting From War,” and “Arms Dealers Not Welcome” obstructed driveways and pedestrian entrances as attendees attempted to register for and enter the convention centre immediately before Canadian Defense Minister Anita Anand was slated to give the opening keynote address.

“The same conflicts around the world which have brought misery to millions have brought record profits to arms manufacturers this year,” said Rachel Small, organizer with World BEYOND War. “These war profiteers have blood on their hands and we are making it impossible for anyone to attend their weapons fair without directly confronting the violence and bloodshed they are complicit in. We’re disrupting CANSEC in solidarity with the millions of people around the world who are being killed, who are suffering, who are being displaced as a result of the weapons sold and military deals made by the people and corporations inside this convention. While more than six million refugees fled Ukraine this year, while more than 400,000 civilians have been killed in seven years of war in Yemen, while at least 13 Palestinian children were killed in the West Bank since the start of 2022, the weapons companies sponsoring and exhibiting in CANSEC are raking in record billions in profits. They are the only people who win these wars.” 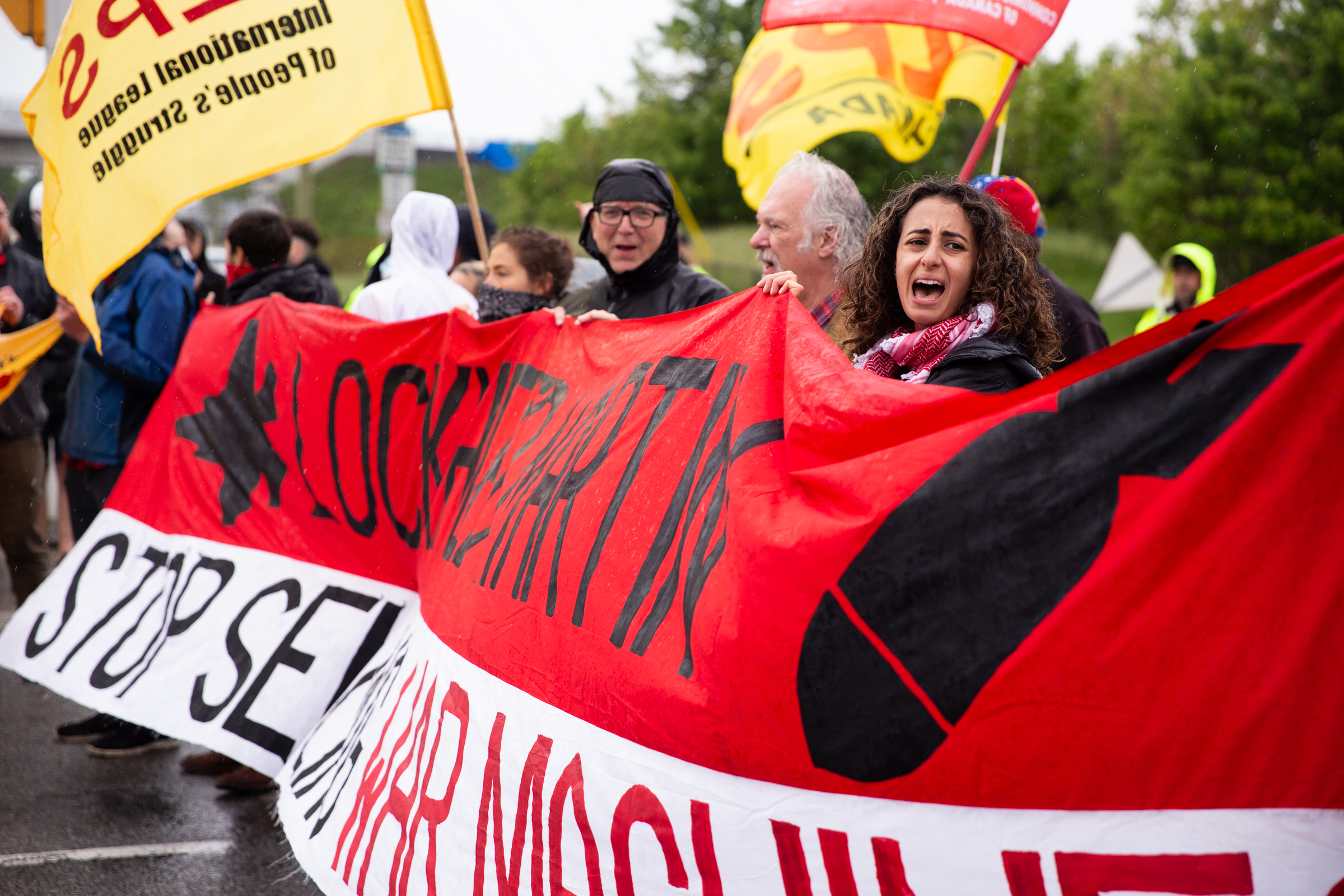 Lockheed Martin, one of the major sponsors of CANSEC, has seen their stocks soar nearly 25 percent since the start of the new year, while Raytheon, General Dynamics and Northrop Grumman each saw their stock prices rise by around 12 percent. Just prior to the Russian invasion of Ukraine, Lockheed Martin Chief Executive Officer James Taiclet said on an earnings call that he predicted the conflict would lead to inflated defence budgets and additional sales for the company. Greg Hayes, CEO of Raytheon, another CANSEC sponsor, told investors earlier this year that the company expected to see “opportunities for international sales” amid the Russian threat. He added: “I fully expect we’re going to see some benefit from it.” Hayes received an annual compensation package of $23 million in 2021, an 11% increase over the previous year.

“The weapons, vehicles and technologies promoted at this arms show have profound implications for human rights in this country and around the world,” said Brent Patterson, Director of Peace Brigades International Canada. “What is celebrated and sold here means human rights violations, surveillance and death.”

Canada has become one of the world’s top arms dealers globally, and is the second biggest weapons supplier to the Middle East region. Most Canadian arms are exported to Saudi Arabia and other countries engaged in violent conflicts in the Middle East and North Africa, even though these customers were repeatedly implicated in serious violations of international humanitarian law.

Since the beginning of the Saudi-led intervention in Yemen in early 2015, Canada has exported approximately $7.8 billion in arms to Saudi Arabia, primarily armored vehicles produced by CANSEC exhibitor GDLS. Now in its seventh year, the war in Yemen has killed over 400,000 people, and created the worst humanitarian crisis in the world. Exhaustive analysis by Canadian civil society organizations has credibly shown these transfers constitute a breach of Canada’s obligations under the Arms Trade Treaty (ATT), which regulates the trade and transfer of weapons, given well-documented instances of Saudi abuses against its own citizens and the people of Yemen. International groups like the Yemen-based Mwatana for Human Rights, as well as Amnesty International and Human Rights Watch, have also documented the devastating role of bombs produced by CANSEC sponsors like Raytheon, General Dynamics, and Lockheed Martin in air strikes on Yemen that hit, among other civilian targets, a marketplace, a wedding, and a school bus.

“Outside its borders, Canadian corporations plunder the oppressed nations of the world while Canadian imperialism benefits from its role as a junior partner in U.S.-led imperialism’s vast complex of military and economic warfare,” said Aiyanas Ormond, with the International League of Peoples’ Struggle. “From its plunder of the mineral wealth of the Philippines, to its support for Israeli occupation, apartheid and war crimes in Palestine, to its criminal role in the occupation and plunder of Haiti, to its sanctions and regime change machinations against Venezuela, to arms exports to other imperialist states and client regimes, Canadian imperialism uses its military and police to attack the people, suppress their just struggles for self-determination and for national and social liberation and to maintain its regime of exploitation and plunder. Let’s join together to shut down this war machine!” 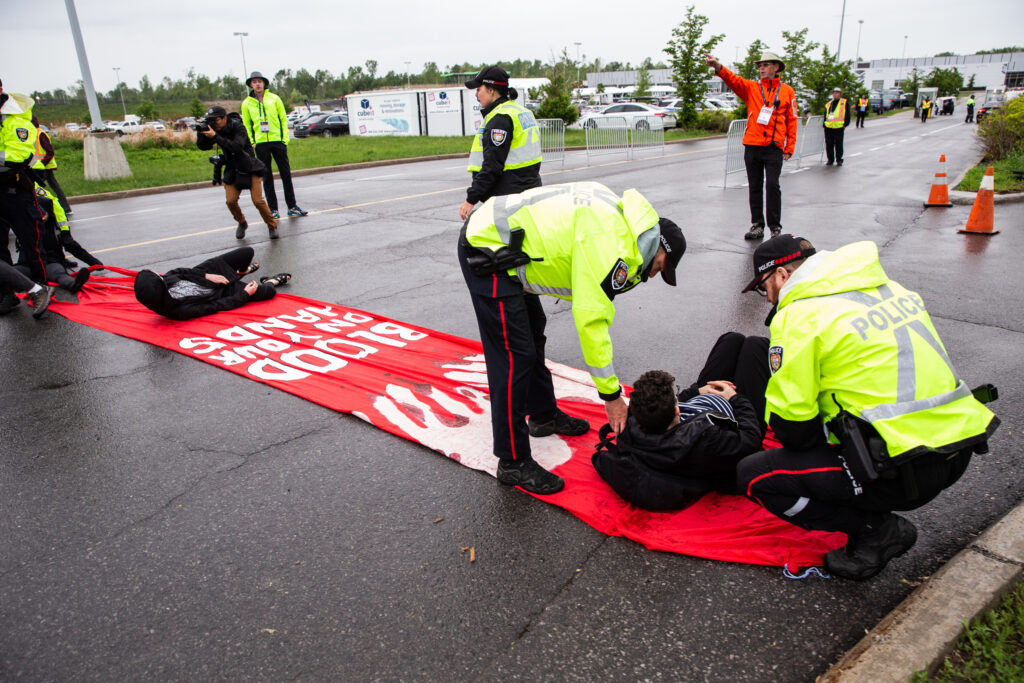 In 2021, Canada exported more than $26 million in military goods to Israel, an increase of 33% over the previous year. This included at least $6 million in explosives. Last year, Canada signed a contract to purchase drones from Israel’s largest weapons maker and CANSEC exhibitor Elbit Systems, which supplies 85% of drones used by the Israeli military to monitor and attack Palestinians in the West Bank and Gaza. An Elbit Systems subsidiary, IMI Systems, is the main provider of 5.56 mm bullets, the same type of bullet that was used by Israeli occupation forces to murder Palestinian journalist Shireen Abu Akleh.

CANSEC exhibitor the Canadian Commercial Corporation, a government agency that facilitates deals between Canadian arms exporters and foreign governments recently brokered a $234 million deal to sell 16 Bell 412 helicopters to the military of the Philippines. Ever since his election in 2016, the regime of Philippine president Rodrigo Duterte has been marked by a reign of terror that has killed thousands under the guise of an anti-drug campaign, including journalists, labor leaders, and human rights activists.

12,000 attendees are expected to gather for the CANSEC arms fair this year, bringing together an estimated 306 exhibitors, including weapons manufacturers, military technology and supply companies, media outlets, and government agencies. 55 international delegations are also slated to attend. The weapons expo is organized by the Canadian Association of Defence and Security Industries (CADSI), which represents more than 900 Canadian defense and security companies. 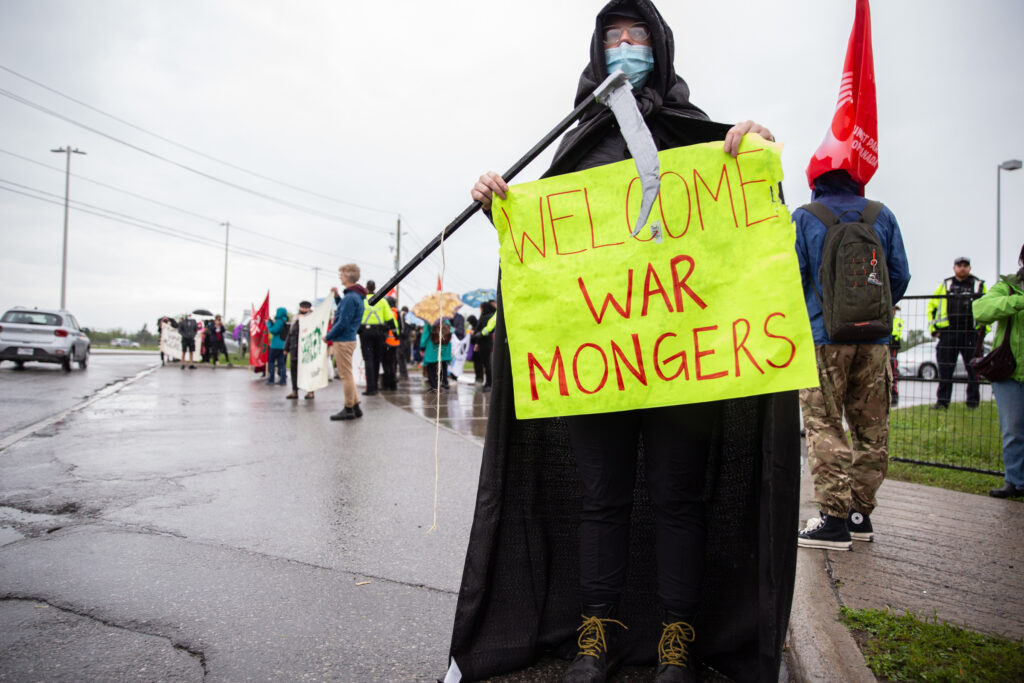 Hundreds of lobbyists in Ottawa represent arms dealers not only competing for military contracts, but lobbying the government to shape the policy priorities to fit the military equipment they are hawking. Lockheed Martin, Boeing, Northrop Grumman, BAE, General Dynamics, L-3 Communications, Airbus, United Technologies and Raytheon all have offices in Ottawa to facilitate access to government officials, most of them within a few blocks from Parliament. CANSEC and its predecessor, ARMX, have faced staunch opposition for over three decades. In April 1989, Ottawa City Council responded to opposition to the arms fair by voting to stop the ARMX arms show taking place at Lansdowne Park and other City-owned properties. On May 22, 1989, more than 2,000 people marched from Confederation Park up Bank Street to protest the arms fair at Lansdowne Park. The following day, Tuesday May 23, the Alliance for Non-Violence Action organized a mass protest in which 160 people were arrested. ARMX did not return to Ottawa until March 1993 when it took place at the Ottawa Congress Centre under the rebranded name Peacekeeping ’93. After facing significant protest ARMX didn’t happen again until May 2009 when it appeared as the first CANSEC arms show, again held at Lansdowne Park, which had been sold from the city of Ottawa to the Regional Municipality of Ottawa-Carleton in 1999.