How to Respond to Common Misconceptions in the U.S. About Ukraine 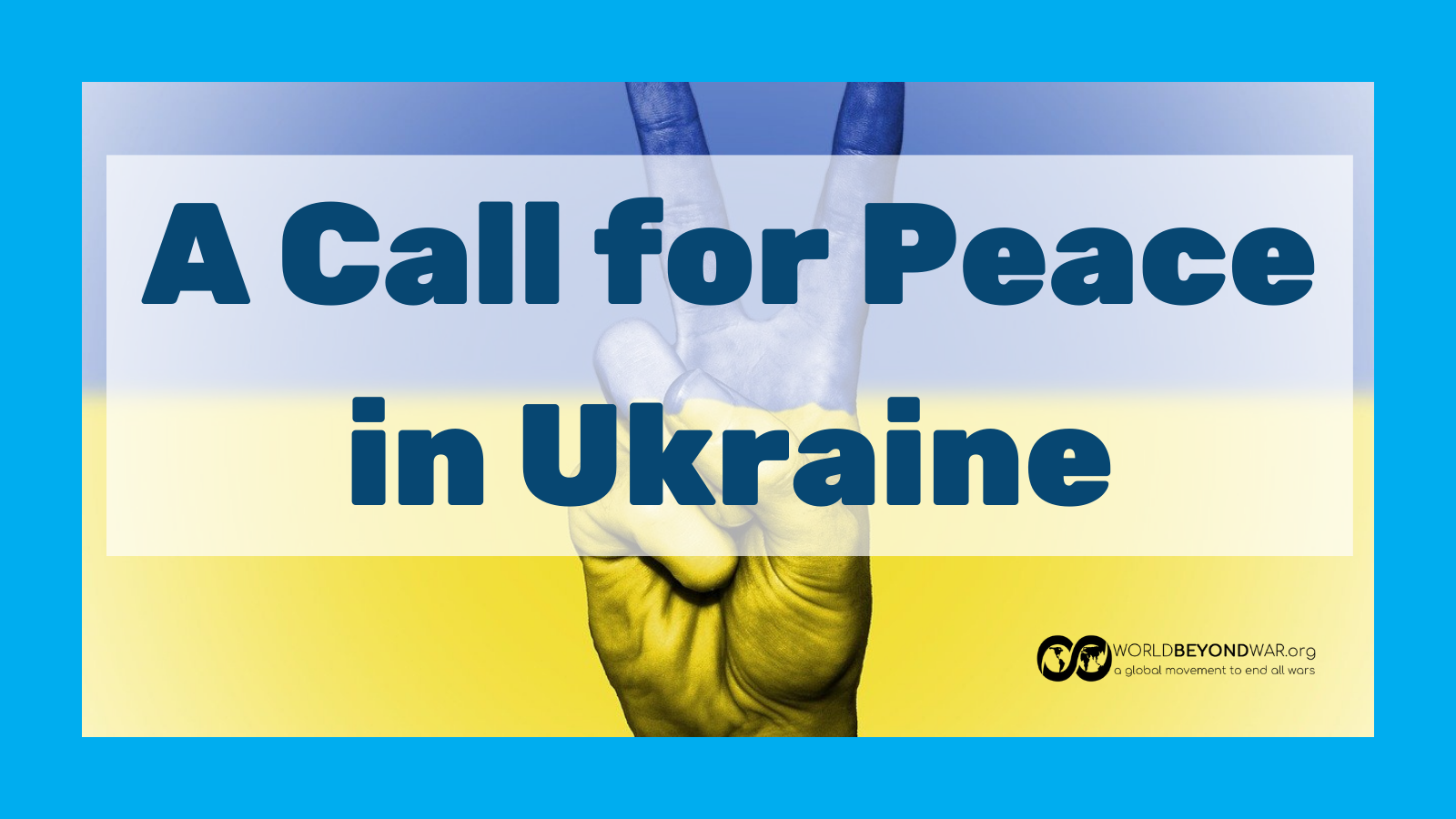 As the war in Ukraine drags on, advocates for negotiation, not escalation are often met with resistance from those who repeat claims spun by military pundits, media outlets, Congress and the White House. Below are rebuttals to common assertions that, if not refuted, risk leading us down the path to nuclear war, further climate degradation, global famine and economic ruin. The Peace in Ukraine Coalition (www.peaceinukraine.org), which includes CODEPINK, World BEYOND War, Women’s International League for Peace and Freedom-US and a host of other organizations, will be engaging in dialogue around these claims during its Week of Action, Sept. 12-15, when people are encouraged to contact the White House and State Department and organize meetings and rallies with members of Congress and the media to demand a ceasefire in Ukraine, diplomacy and a freeze on weapons shipments.

(S) Russia’s invasion of Ukraine was unjustified AND unprovoked.

(R) Russia’s invasion of Ukraine is an unjustified war that violates the UN Charter requiring UN member states to refrain from the “use of force against the territorial integrity or political independence of any state. The United States, however, provoked the Russian invasion of Ukraine by supporting the expansion of NATO, a hostile military alliance, backing a coup to overthrow a democratically elected President, and sending arms to Ukraine since 2014. This made Ukraine, in the eyes of Russia, an armed camp and existential threat.

In the early 90s, as the Soviet Union collapsed, NATO should have dissolved.

Under Presidents Clinton, Obama and Trump, however, NATO expanded from 12 countries at the fall of the Soviet Union to 30 countries, including countries that share a border with Russia, from northern Norway, eastern Latvia and Estonia to Poland and Lithuania around Russia’s Kaliningrad region.

Putin made it clear that Ukraine joining NATO was a red line that must never be crossed as Ukraine’s membership in NATO was an existential threat to Russia. Still, with US encouragement, in 2019 Ukraine enshrined in its constitution a commitment to join NATO.

(R) If Putin and Zelenskyy can negotiate the flow of grain exports, prisoner exchanges and international inspections of a nuclear plant in Ukraine, they can negotiate an end to this war. In fact, Russia and Ukraine already agreed to a 15-point peace plan brokered by Turkey in March. Russia agreed to withdraw from areas under Ukrainian government control before the invasion, in exchange for Ukraine agreeing not to join NATO and adopting a position of neutrality. Talks to work out the details were derailed when then UK Prime Minister Boris Johnson went to Kyiv and persuaded Zelensky to abandon the negotiations, telling him the UK/US and NATO saw a chance to “press” Russia and wanted to make the most of it.

Prior to the Russian invasion of Ukraine, the two countries signed the 2015 Minsk Accord, a peace deal that established a ceasefire, a commitment to elections in the Donbas and semi-autonomy for the region, as well. The agreement fell apart as the US encouraged Ukraine, from 2014 on, to join NATO and funneled billions of dollars of weapons to fuel the civil war in the east between neo-Nazi nationalists and Russian separtartists.

Also, the US negotiated the START arms control treaty with Russia, which is still in effect. This treaty limits the number of nuclear warheads to 1500 that the US and Russia can deploy. It was the US, not Russia, that refused to reaffirm the Intermediate-Range Nuclear Forces (INF) Treaty, abandoned under Trump, that required the United States and the Soviet Union to eliminate and permanently forswear all of their nuclear and conventional ground-launched ballistic and cruise missiles with ranges of 500 to 5,500 kilometers. The treaty marked the first time the superpowers had agreed to reduce their nuclear arsenals, eliminate an entire category of nuclear weapons, and employ extensive on-site inspections for verification. As a result of the INF Treaty, the United States and the Soviet Union destroyed a total of 2,692 short-, medium-, and intermediate-range missiles.

(S) If you negotiate a diplomatic settlement, you are rewarding Putin for the invasion.

The Department of Defense estimates Russia has lost 60-80,000 men in the fighting, as of August, 2022. This is not a reward. If you negotiate a diplomatic settlement, you are rewarding the US taxpayer.

The US has spent $40 billion in the last year to fuel this conflict, which is leading to inflation and a slowdown in the supply chain here and in Europe, where 70,000 recently marched in Czechoslovakia to demand their country not impose sanction on Russia . What could $40 billion buy in the United States? According to the National Priorities Project trade off calculator,  that same amount of money for a one year period could pay for:

The longer the war drags on, the more likely it will last for years and years, costing more death and destruction in Ukraine, exacerbating the climate crisis, causing famine in the Middle East and Africa, disrupting economies and pushing us to the brink of nuclear war.

(S)  It’s not up to the US to decide the fate of Ukraine.

The US is already deciding the fate of Ukraine by shipping $40-50 billion worth of weapons and military aid in the last six months, that’s over $110  million dollars a day, to escalate this war, starve millions in Africa and the Middle East, worsen the climate crisis, send inflation skyrocketing and risk nuclear war between the two most heavily armed nuclear nations–the US and Russia. Scientists say a nuclear war between the US and Russia would likely result in the death of 5-billion people, 60% of the human population. Those who survived would suffer in subzero sunless winters of famine.

We are now witnessing a proxy war–bordering on a direct war— between the US and Russia, the two countries sitting on 90% of the world’s nuclear stockpile. The US government wants to maintain domination of a unipolar world–this is the reason Congress and the White House are sending Ukraine rockets and missiles and providing intelligence to sink Russian ships. It’s not about democracy versus autocracy; it’s about US global domination.

As for the role of the US in negotiating a peace settlement, it is now incumbent upon us, the country that provoked this war, to support a diplomatic agreement.

(S) We must keep sending weapons to Ukraine to support that country’s right to self-determination.

(R) The question is self-determination for who? For the last decade the US has undermined the right of Ukrainians in the east, those most aligned with Russia, to exercise self-determination. Instead of supporting implementation of the MINSK II Accord to promote peace, the US funneled billions of dollars worth of weapons to fuel a war in the east between those aligned with right-wing nationalist neo-Nazi forces and those aligned with Russia. In 2019, Ukraine passed legislation banning the use of Russian in the public sector workforce. The law also required TV and film distribution firms to ensure 90 percent of their content was in Ukrainian.

A civil war in the Donbass resulted in 14,000 deaths prior to the Russian invasion, so the conflict did not start on Feb. 24th, but has been ongoing since 2014.

As for the right of self-determination, the world has a right to choose life over death and the longer this war continues, the greater the risk to the entire world.

(S) This is a war between autocracy and democracy, and we must defend democracy around the world.

(R) While it’s true we have some semblance of democracy–some people can vote–in the United States, the fight to defend democracy must begin at home, where neo-fascists legislate to limit voting rights, storm the capitol, spread race hatred and back abortion bans to deny women control over their own bodies and send doctors who assist them to prison for life. Rather than hurling taxpayer money to defend a corrupt government in Ukraine, where neo-Nazis are an official wing of the military, we should focus our attention on defending democracy at home. Moreover, freedom of the press is under attack, not just in Russia and Ukraine, but here in the United States, where the Biden administration–following in Trump’s footsteps– insists on extraditing journalist Julian Assange for publishing US war crimes in Iraq and Afghanistan. If Assange is extradited and prosecuted, this will have a chilling effect on all journalists in the United States. Without a free press, there is no democracy.