Good afternoon to all our friends attending the Spring Action against wars and US Militarism.

My name is Hiroji Yamashiro, and I am sending this message from Henoko, Okinawa. 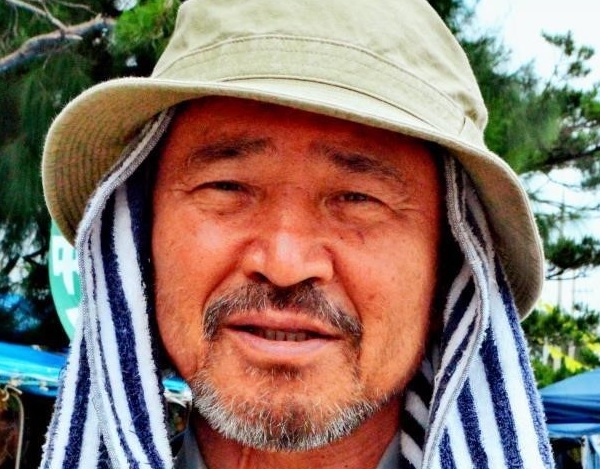 I greatly appreciate the support we receive from so many Japanese and American people in the U.S. in our struggles for justice on Okinawa.

Throughout the trial, we argued that these accusations were part of a broad effort by the Japanese government to crush the people of Okinawa in the battle against the new base in Henoko, and all other anti-base movements in Okinawa.

Unfortunately, the judge ruled against us by focusing only on the petty crimes of our physical actions, and found us guilty of assault, destruction of property, forcible obstruction of official business and obstruction of performance of public duty, all without considering the background of the protest movement.

The court and the government simply ignored our arguments.

We are completely dissatisfied with this verdict, which is unfair and unjust.  They should not judge us simply by our actions of resistance.
For decades, Okinawa has suffered from discrimination and forced sacrifice by the Japanese government.
They mobilized as many as 1000 riot police to Takae from all over the county to suppress the local protests.

The construction of the new U.S. military base in Henoko is yet another example of oppression against which we have protested.
Our struggle has been a fight for justice for Okinawa, and to object to the violence perpetrated by the Japanese government against the Okinawan people.
As the district court did not consider these facts at all, we appealed the decision to the high court on March 14, soon after the sentence was given.
There is no telling what will happen at the high court, but we are determined to keep fighting by speaking out for our cause and against injustice by the Government in the appeal court.

During the trial, I traveled across Japan to appeal to the people about the blatant injustice of constructing yet another new U.S. base in Henoko.
Now, since the verdict was given and some legal restrictions which bound me during the bail time are gone, I have been able to return to the Camp Schwab Gate and join the sit-in. I have resumed raising my voice against forcible removal of the protesters by the riot police.
I have renewed my determination to do my best, believing that we definitely and desperately will stop the construction of the new base in Henoko.

According to the information our fellow activists obtained through the Freedom of Information Act, the Sea of Henoko or Oura Bay is extremely complicated, and the seafloor of the construction site is very fragile. In addition, a geologic fault has been recently discovered.

Around this fault the sea is very deep and the sea floor is covered by a 100-foot layer of very sandy soil or clay.

These facts indicate technological challenges for construction work. The Japanese Government is required to obtain the approval of the Governor of Okinawa for any changes in the reclamation and construction plans.
If Governor Onaga is determined to refuse any changes and demonstrates his will to never ever agree or collaborate with the construction of the new base, it would definitely be stopped.

Therefore, we will keep supporting the Governor and never give up until the day the construction plan is abandoned.

My friends in America, I thank you for your strong support and the many warm messages we receive from you.
It encourages us a lot to know that people in America are campaigning for the United States to eliminate military bases on any foreign soil, and that the servicemen and women should return home.

My friends, please work with us the people of Okinawa to stop wars waged by the United States anywhere in the world.
Let’s close down and remove all U.S. military bases and all tools projecting war.

We will continue our efforts to seek a peaceful world, which is attained through friendship, collaboration and dialogue.

Together we will achieve this.

Finally, we deeply appreciate that through the heartfelt efforts of the Coalition Against the U.S. Foreign Military Bases, signatures were collected from thousands of people in almost 50 countries around the world, appealing to the Japanese government and the court for our innocence and for the justice of our movement.

Although the Japanese government tried to brand us criminals, it was encouraging to us that many of the world’s people acknowledged that we were doing the right thing.
I will never forget it. I pledge to you that we will keep fighting and raise our voices throughout the trial.

I hope someday I will see you in America and express my gratitude to you all.  Thank you very much for your attention.

Hiroji Yamashiro is Chair of the Okinawa Peace Action Center and the prominent leader of the anti-base actions in Okinawa. His charysmatic presence at the sit-in protest at Camp Schwab Gatefront and Takae helipad site has empowered the people. Arrested and held in solitary confinement for five months 2016-2017, the guilty verdict was handed down on March 14 this year.