Guess Who Arms Both Azerbaijan and Armenia 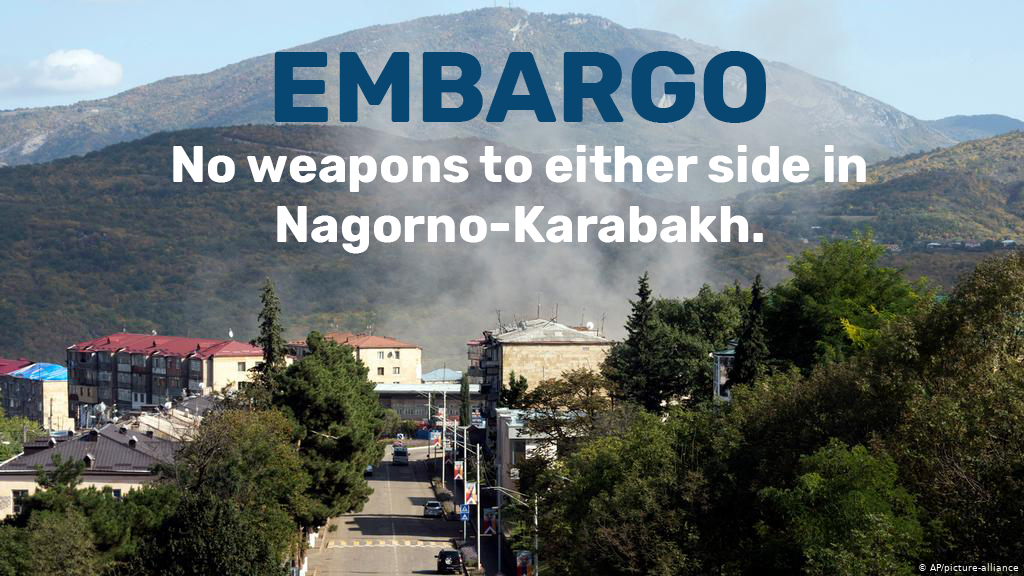 As with many wars around the world, the current war between Azerbaijan and Armenia is a war between militaries armed and trained by the United States. And in the view of some experts, the level of weapons purchased by Azerbaijan is a key cause of the war. Before anybody proposes shipping more weapons to Armenia as the ideal solution, there is another possibility.

Of course, Azerbaijan has an extremely oppressive government, so the arming of that government by the U.S. government has to be explained to anyone lacking basic context — something no consumer of U.S. media could really be blamed for. The places in the world with wars manufacture almost no weapons. This fact surprises some people, but nobody disputes it. The weapons are shipped in, almost entirely from a handful of countries. The United States is, far and away, the top weapons dealer to the world and to brutal governments of the world.

Freedom House is an organization that has been widely criticized for being funded by one government (the U.S., plus funding from a few allied governments) while producing rankings of governments. Freedom House ranks nations as “free,” “partly free,” and “not free,” based on their domestic policies and its U.S. bias. It deems 50 countries to be “not free,” and one of them is Azerbaijan. The CIA-funded Political Instability Task Force identified 21 nations as autocracies, including Azerbaijan. The U.S. State Department says of Azerbaijan:

The U.S. military says of Azerbaijan: what that place needs is more weapons! It says the same of Armenia, which the U.S. State Department gives only a somewhat better report:

In fact, the U.S. government allows, arranges for, or in some cases even provides the funding for, U.S. weapons sales to 41 of the 50 “not free” countries — or 82 percent (and 20 of the CIA’s 21 autocracies). To produce this figure, I have looked at U.S. weapons sales between 2010 and 2019 as documented by either the Stockholm International Peace Research Institute Arms Trade Database, or by the U.S. military in a document titled “Foreign Military Sales, Foreign Military Construction Sales And Other Security Cooperation Historical Facts: As of September 30, 2017.” The 41 include Azerbaijan.

The United States also provides military training of one sort or another to 44 out of 50, or 88 percent of the countries that its own funding designates as “not free.” I base this on finding such trainings listed in either 2017 or 2018 in one or both of these sources: The U.S. State Department’s Foreign Military Training Report: Fiscal Years 2017 and 2018: Joint Report to Congress Volumes I and II, and the United States Agency for International Development (USAID)’s Congressional Budget Justification: FOREIGN ASSISTANCE: SUPPLEMENTARY TABLES: Fiscal Year 2018. The 44 include Azerbaijan.

In addition to selling (or giving) them weapons and training them, the U.S. government also provides funding directly to foreign militaries. Of the 50 oppressive governments, as listed by Freedom House, 33 receive “foreign military financing” or other funding for military activities from the U.S. government, with — it’s extremely safe to say — less outrage in the U.S. media or from U.S. tax payers than we hear over providing food to people in the United States who are hungry. I base this list on the United States Agency for International Development (USAID)’s Congressional Budget Justification: FOREIGN ASSISTANCE: SUMMARY TABLES: Fiscal Year 2017, and Congressional Budget Justification: FOREIGN ASSISTANCE: SUPPLEMENTARY TABLES: Fiscal Year 2018. The 33 include Azerbaijan.

So, this war between Azerbaijan and Armenia is, quite typically, a U.S. war even if the U.S. public doesn’t think so, even if the news is that the United States is trying to negotiate peace — news that includes zero mention of cutting off the weapons flow or even threatening to cut off the weapons flow. The Washington Post would like to send in the U.S. military — which it thinks is a simple and obvious solution. That claim is dependent on nobody even thinking of the idea of cutting off the weapons. This is not a Trump war or an Obama war. It’s not a Republican war or Democratic war. It’s not a war because Trump loves dictators or because Bernie Sanders said something less than murderous about Fidel Castro. It’s a standard bipartisan war, so normal as for the U.S. role to go unmentioned. If the war is mentioned at all in tonight’s presidential debate, you can be virtually certain the weapons used to fight it will not be. Political wrongs from decades gone by are a popular topic and very real, and they need to be righted, but righting them without military weaponry would kill fewer people and create a longer-lasting resolution.

The United States arms and trains Armenia as well as Azerbaijan, but it’s worth focusing attention on the governments that the U.S. government itself calls oppressive, because it disrupts the spreading-democracy story. Out of 50 oppressive governments, so labeled by a U.S.-funded organization, the U.S. militarily supports in at least one of the three ways discussed above 48 of them or 96 percent, all but the tiny designated enemies of Cuba and North Korea. In some of them, the United States bases a significant number of its own troops (i.e. over 100): Afghanistan, Bahrain, Egypt, Iraq, Qatar, Saudi Arabia, Syria, Thailand, Turkey, and the United Arab Emirates. With some of them, such as Saudi Arabia in Yemen, the U.S. military partners in brutal wars itself. Others, such as the governments of Afghanistan and Iraq, are the products of U.S. wars. The big danger with this current war lies in obliviousness to where the weapons come from, combined with the insane notion that the solution to war is expanded war.

Do not provide any weaponry to either side of the violence in Nagorno-Karabakh.