German MPs have issued an ultimatum that could torpedo a $652 million deal between Germany and the Israel Aerospace Industries (IAI) to lease Heron-2 drones to the German Air Force.

Members of the Social Democratic Party (SPD), which is part of Chancellor Angela Merkel’s coalition government, told Defense Minister Ursula von der Leyen on Friday that they would not approve the deal with Israel in its current version.

The Heron-2, which will be leased to the Germans in cooperation with Airbus, is one of the largest drones in the world. The aircraft has a 26-meter wingspan and can stay in the air for more than 24 hours. Additionally, it has a carrying capacity of several tons. 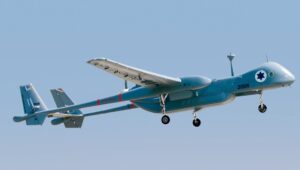 Currently, Germany is operating more than ten Heron-1 drones around the world, including in Afghanistan, used for reconnaissance purposes only.

The Social Democratic MPs, however, are demanding that the Heron-2 drones, which can be equipped with rockets unlike the previous model, do not come with the inclusion of any specialized weapons systems.

The MPs are worried the drones would be used for targeted killings. Inside sources have described the crisis as a “matter of principle” that risks toppling the coalition.

A visit to the Israel and the IAI production line two weeks ago led to the SPD’s change in position.

When I saw the drones we’ve agreed to lease, which can be armed, I realized the only thing missing to arm them is rockets,” MP Karl-Heinz Brunner told Yedioth Ahronoth.

The ultimatum set by the SPD endangers a 1-billion-euro ($1.11 billion) funding package for the German military. The last opportunity to approve the deal before the Bundestag’s summer hiatus is at the budget committee meeting on Wednesday. If the deal is not approved this week, it would have to wait for the next government after the September elections.

According to Der Spiegel, the SPD parliamentarians have taken issue with a secret section of the deal worth 100 million euro, in which Germany commits to purchasing 60 missiles that can be fitted onto the drone for training purposes. As part of the deal, German drone operators would receive training at the Tel Nof Airbase in Israel.