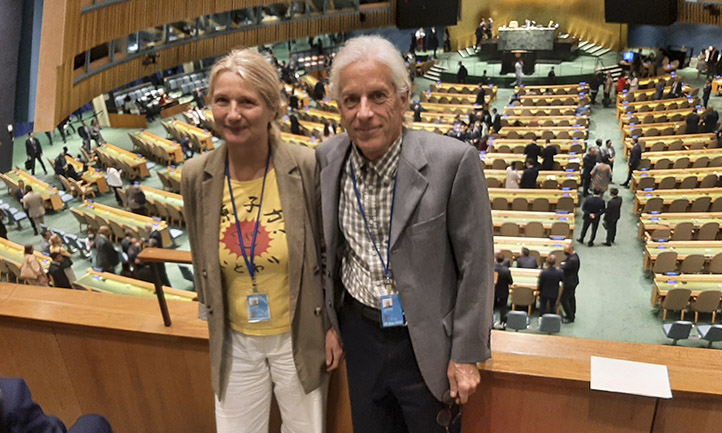 A U.S. peace activist from Luck, Wisconsin has been ordered by a German court to serve 50 days in jail there after he refused to pay 600 Euros in fines for two trespass convictions stemming from protests against the U.S. nuclear weapons stationed at Germany’s Büchel Air Base, 80 miles southeast of Cologne.

John LaForge, 66, a Duluth native and long-time staff person of the anti-nuclear group Nukewatch, participated in two “go-in” actions at the German base in 2018. The first on July 15 involved eighteen people who gained entry to the base by clipping through the chain link fence on a Sunday morning in broad daylight. The second, on August 6, the anniversary of the U.S. bombing of Hiroshima, saw LaForge and Susan Crane of Redwood City, California sneak inside the base and climb atop a bunker which likely housed some of the approximately twenty U.S. “B61” thermonuclear gravity bombs stationed there.*

Germany’s Regional Court in Koblenz sentenced LaForge to a fine of 600 Euros ($619) or 50 days in jail, and has ordered him to report to jail in Wittlich, Germany September 25. The court order was issued July 25 but took until August 11 to reach LaForge by mail in the Unites States. LaForge currently has an appeal of the conviction pending before Germany’s Constitutional Court in Karlsruhe, the country’s highest.

The appeal, by Attorney Anna Busl of Bonn, argues that the trial court and the Koblenz court both erred by refusing to consider LaForge’s defense of “crime prevention,” thereby violating his right to present a defense. Both courts declined to hear expert witnesses who were called to explain the international treaty law that prohibit both the planning of mass destruction and the transfer of nuclear weapons from one country to another. Germany’s stationing of the U.S. nuclear weapons is a criminal violation of the Nonproliferation Treaty (NPT), LaForge argues, because the treaty forbids any transfer of nuclear weapons from or to other countries party to the treaty, including both the U.S. and Germany. The appeal further argues that the policy of “nuclear deterrence” is a criminal conspiracy to commit vast, disproportionate, and indiscriminate destruction using the U.S. hydrogen bombs.

LaForge attended the opening of the 10th Review Conference of the Nonproliferation Treaty at UN headquarters in New York City, and responded the August 1st statements made there by Germany and the United States. “Secretary of State Tony Blinken and German Foreign Minister Annalena Baerbock, who heads Germany’s Green Party, both condemned Russia’s nuclear weapons policy, but ignored their own ‘forward-based’ U.S. nuclear bombs at Büchel which are pointed up Russia’s nose. Minister Baerbock even objected formally in writing to China’s charge on August 2nd that the practice of placing U.S. nuclear weapons in Germany is in violation of the NPT, noting that the policy predates the 1970 treaty. But this is like a slaver claiming he could keep his enslaved people in chains after the U.S. Civil War, because he had purchased them before 1865,” he said.

The United States is the only country in the world that stations its nuclear weapons in other countries.

The U.S. bombs at Büchel are 170-kiloton B61-3s and 50-kiloton B61-4s, which are respectively 11 times and 3 times more powerful than the Hiroshima bomb which promptly killed 140,000 people. LaForge argues in his appeal that these weapons can only produce massacre, that plans to attack using them are a criminal conspiracy, and that his attempt to stop their use is a justified act of crime prevention.

Germany’s nationwide campaign “Büchel Is Everywhere: Nuclear Weapons-Free Now!” has three demands: the ouster of the U.S. weapons; the cancellation of U.S. plans to replace today’s bombs with a new B61-version-12 beginning in 2024; and the ratification by Germany of the 2017 Treaty on the Prohibition of Nuclear Weapons which entered into force January 22, 2021.