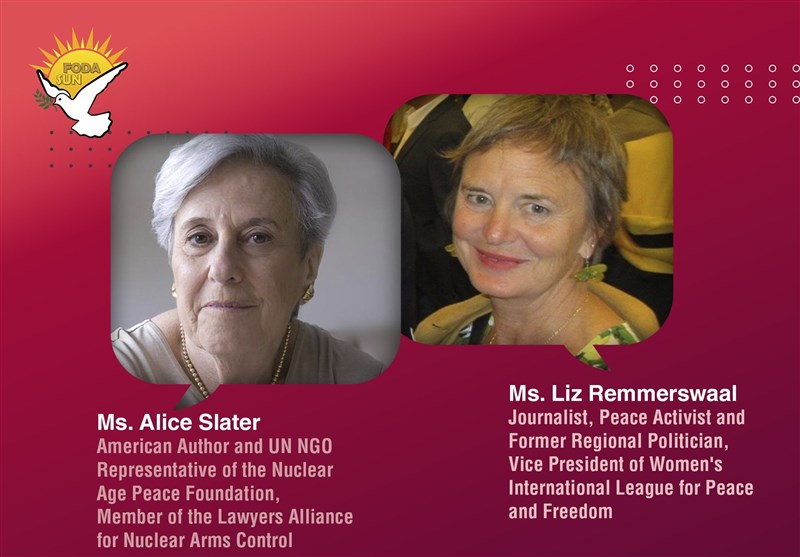 FODASUN organized the webinar on “women and peace” to discuss the role that women may play in global peace processes as well as disarmament and nuclear arms control.

The event also aimed to address the role that women can play in World peace processes as well as their role in disarmament and Nuclear Arms Control.

The Foundation is a non-governmental organization dedicated to regional and international peace, tolerance, dialogue and the defense of human rights.

During the event, Ms. Alice Slater, the UN NGO Representative of the Nuclear Age Peace Foundation, addressed the current situation in Ukraine as well as the subject of Cold War and pointed to the relentless competition of world powers to build more destructive missile, then explained about her efforts for organizing a movement in New York for disarmament and nuclear arms control.

“We are facing a frightening escalation of hostilities in the unbearable invasion of Ukraine with rising devastation, the whole Western world is up in arms, hurling invective and punishing sanctions, nuclear saber-rattling and menacing military “exercises” on hostile borders. All this, as a raging plague covers the planet and devastating climate catastrophes and earth-shattering nuclear war threatens our very existence on Mother Earth. People all over the world are beginning to march against the outrages from the deaf, dumb and blind corporate patriarchy, driven by mindless greed and lust for power and domination,” said the American writer.

Also being critical of Western hypocrisy over building more nuclear bombs despite their empty promises of giving up nuclear weapons in the 1970s, she added: “The treaty of prohibition of nuclear weapons or non-proliferation treaty is hypocritical because Western nuclear States promised in the 1970s to give up their nuclear weapons but Obama was permitting $1 trillion programs for 30 years to build two new bomb factories. This dopey non-proliferation treaty which Iran is suffering from, everybody agreed not to get the bomb except the five countries that said they will make good faith to get rid of it and of course, there is no good faith and they are building a new one”.

Referring to US and NATO efforts to expand in Eastern Europe and stand on Russia’s borders, the member of the Lawyers Alliance for Nuclear Arms Control, added:” We are right up to their border now and I don’t want Ukraine in NATO. The Americans would never stand for Russia being in Canada or Mexico. We keep nuclear weapons in five NATO countries and that is another thing Putin is saying that get them out”.

As FODASUN’s second speaker, Ms. Liz Remmerswaal, a Journalist and former regional politician, gave a brief about woman’s movement and their engagement in world peace processes, noting: “On 8 July 1996, the International Court of Justice delivered its historic Advisory Opinion, entitled “Legality of the Threat or Use of Nuclear Weapons.”

Responding to a question from FODASUN’s expert of foreign affairs about the likely obstacles created in front of Iranian women to actively work for peace in the international sphere due to US sanctions, she said: “Applying economic sanctions is a warlike act, and often kills more people than actual weapons. Moreover, these sanctions hurt the poorest and most vulnerable sectors of society by causing hunger, disease, and unemployment. They are explicitly designed to do so”.

“The US government has also forced other countries to obey its sanctions regime against targeted states through the use of extraterritoriality, that is, by penalizing foreign corporations that dare to trade with countries which the USA has sanctioned. Humanitarian goods such as medical supplies, which are exempted from economic sanctions under international law, have consistently been denied to countries such as Iran and Venezuela. That the US government would actually increase the sanctions against those two countries during a pandemic is simply barbaric”, the activist and coordinator with Pacific Peace Network added at the final part of her remarks.