End the U.S. Military Air Base Construction in Henoko, Okinawa 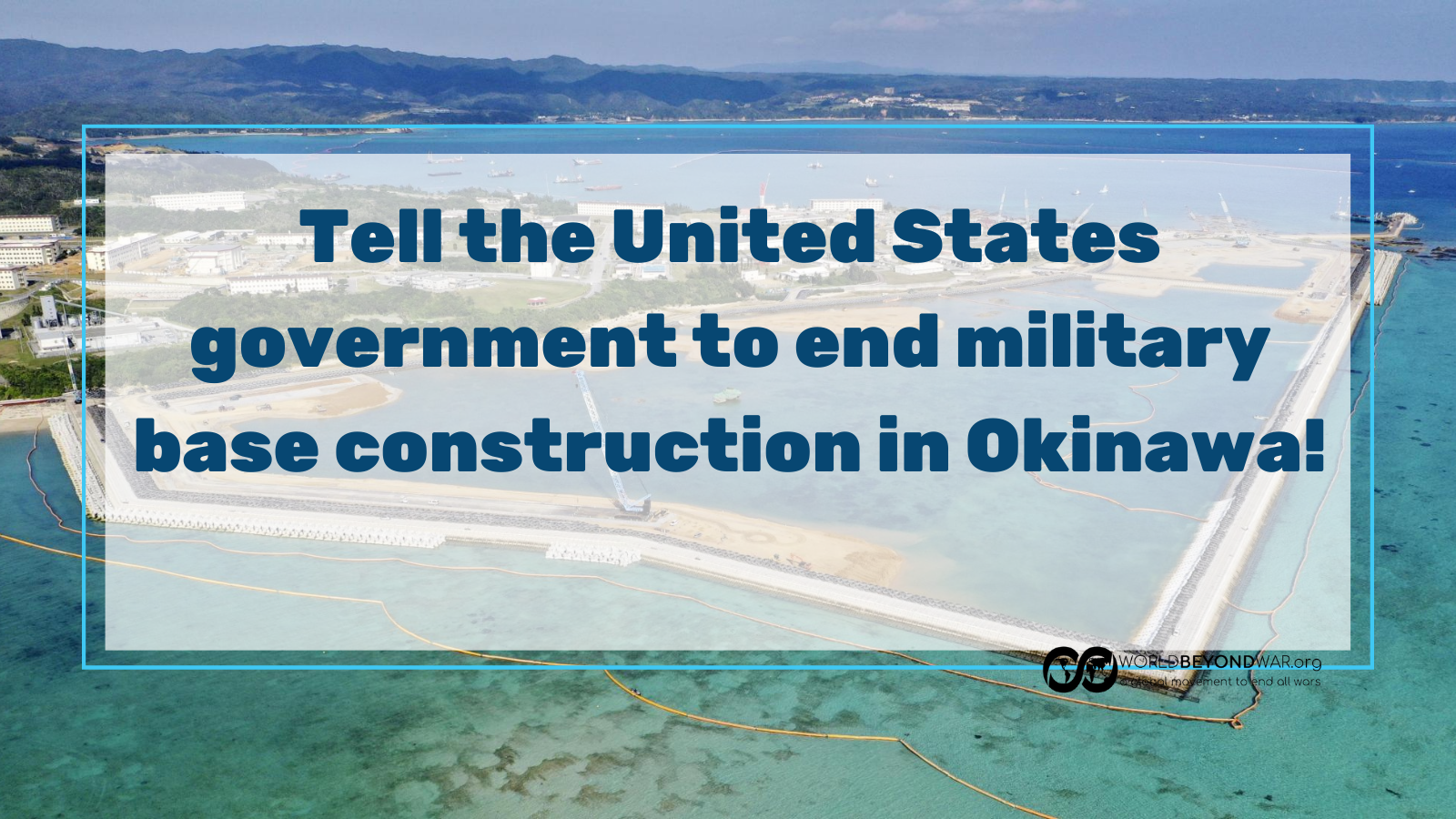 A petition to President Joe Biden was read aloud in English and Japanese at the White House and at the Embassy of Japan in Washington, D.C., on Saturday, August 21, 2021, by David Swanson and Hideko Otake.

The petition and videos from Washington are here.

The text of the petition is as follows:

We, the undersigned, wish to convey our strong support for the Governor of Okinawa, Denny Tamaki, and the indigenous people of Okinawa, and their request for the cessation of the building of a U.S. military airbase in Henoko.

On January 13th 2021, Governor Tamaki sent a letter to President Biden (enclosed) outlining the many reasons the airbase construction project at Henoko should be dismantled, including:

Overwhelming opposition by the Indigenous Okinawan people. In a prefectural referendum, 71.7% voted against the project. There have been continuous protests and even hunger strikes by the public.

Engineering unfeasibility. The construction plan requires large-scale land reclamation work, but the seabed that will be reclaimed is as soft as mayonnaise and poses massive engineering problems which has caused the completion date pushed from 2014 to 2030 and the cost from $3.3 billion to $8.7 billion. Some engineers do not believe that it is even possible to build. Even Mark Cancian of the Center for Strategic and International Studies (CSIS) has concluded in a fact-driven report that it is unlikely that the project will ever be completed.[1] Moreover, the site is vulnerable to earthquakes. There is an active fault under the site.[2]

Irreparable environmental damage. The ocean area that is being reclaimed is unique in its biodiversity and is the home of endangered marine mammals such as dugongs.

The United States maintains 119 military facilities in Japan. Okinawa, which makes up only 0.6% of the entire land area of Japan holds 70% of these facilities, which cover 20% of this small island. For decades, the people of Okinawa have suffered at the hands of occupying forces. The U.S. military has already caused grievous harm by aircraft accidents, crimes by U.S. service members and major environmental pollution by toxic substances such as PFAS. The very least the U.S. could do is to stop building yet another base on this besieged island.

2 Ikue NAKAIMA, “Expert indicates that an active fault line in the undersea section of the Henoko Base construction zone could pose danger,” Ryukyu Shimpo (25 October 2017). http://english.ryukyushimpo.jp/2017/10/31/27956/

On behalf of the 1.45 million people of Okinawa, Japan, I would like to congratulate you on your election to be the next President and Vice President of the United States. We appreciate the United States’ tremendous contributions to Japan’s national security as well as to the peace and stability in East Asia.

Many people in the United States have personal relationships with Okinawa. For example, the Okinawa Association of America in the State of California has the largest membership in the mainland United States, and it has reached over 1,000 members. Likewise, about 50,000 people in the State of Hawaii have Okinawan ancestry through immigration. The people of Okinawa also have fostered its unique culture by incorporating American culture after World War II. These symbolize the strong, history-based ties between the United States and Okinawa, and I look forward to building close relations with your Administration.

I understand that Japan-U.S. relations, including the bilateral security alliance, have contributed greatly to Japan’s national security as well as the peace and stability in East Asia. Meanwhile, Okinawa has played a disproportionately large role in upholding the alliance. More than 70 percent of the military facilities exclusively used by the U.S. forces in Japan (including Kadena Air Base) are concentrated on Okinawa, even though Okinawa accounts for only 0.6 percent of the entire land area of Japan. This has led to numerous difficulties for the people of Okinawa since the end of World War II. These include military aircraft noise/accidents, unfortunate crimes committed by U.S. service members, and environmental pollution by toxic substances such as PFAS.

Given the recent military rise of China, the U.S. military bases concentrated in Okinawa have become increasingly vulnerable. I am aware that the U.S. Marines have introduced new operational concepts such as the Expeditionary Advanced Base Operations (EABO) and are shifting to deploying more dispersed, small-scale capabilities over the Indo-Pacific. In the hope of keeping the Japan-U.S. alliance sustainable, I would like to request your support to reduce the military footprint in Okinawa when making further decisions regarding Indo-Pacific policies.

Currently, the construction project of the Futenma Replacement Facility (FRF) on Okinawa faces strong public opposition. The former Governor Takeshi Onaga and I won the gubernatorial elections by holding up a campaign promise to oppose the plan. In a prefectural referendum on the FRF project, 434,273 people, accounting for the overwhelming majority of total voters (71.7 percent), casted votes in opposition to the project.

The construction plan requires large-scale land reclamation work, but the ocean where the work is planned is globally known for its vast biodiversity and is home to endangered marine mammals such as dugongs. Since the seabed that will be reclaimed is as soft as mayonnaise, the project requires a massive foundation improvement by driving 71,000 piles into the seabed. The Japanese government, which oversees the project, currently estimates that the construction will take at least another 12 years with an overall cost of about $9.3 billion. Geologists also warn of the risk of potential uneven ground subsidence because about 70% of the reclamation work will be conducted in an area where the water is very deep, the seabed is very uneven, and the soft foundation is distributed randomly. The seismic activities in the area have also been addressed by experts, who have expressed concern about the existence of active earthquake fault lines.

These difficulties could adversely impact the Marines’ future operations in the FRF even after the project is completed more than 10 years from now. If a strong earthquake occurs in the area, it could cause serious risks to U.S. service members, the Marines’ equipment and facilities, and the overall U.S. national interest. With these issues in mind, I would like to request a comprehensive reassessment of the project by your Administration.

We thank you for your attention in this matter and look forward to working together.

David Swanson noted in his video the critical importance of blocking the U.S. Senate from confirming Friday’s nomination of Rahm Emanuel for U.S. Ambassador to Japan, which could only make everything worse. U.S. residents/citizens can email their Senators here.