(This is section 61 of the World Beyond War white paper A Global Security System: An Alternative to War. Continue to preceding | following section.) 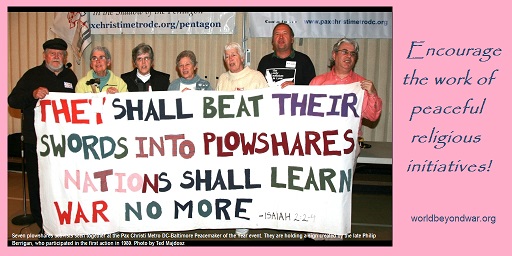 Encourage the work of peaceful religious initiatives!
(Please retweet this message, and support all of World Beyond War’s social media campaigns.)

Peace has been a religious concern for much of history. Throughout the history of nonviolence we have seen the importance of faith communities, recognizing that many nonviolence leaders were/are people of strong religious and moral faith. Just consider this simple quote by Catholic writer and peace advocate Thomas Merton:

Regardless of one’s faith tradition, rejection of institutional religion, spiritual direction or complete atheism, the work by peaceful religious initiatives is encouraging and should be further encouraged.note14 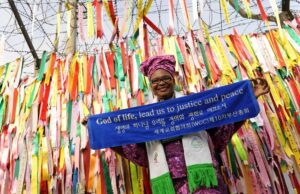 World Council of Churches image: “Prayers for peace at Imjingak during the WCC 10th Assembly. Oubunmi Adedoyin Badejo from Nigeria”

The followers of every religion can cite sources from scripture that justify violence, but all of the world’s religions also contain scriptural teachings that advocate peaceful relationships among all people. The former must be debunked in favor of the latter. The “golden rule” is found in one form or another in them all, as in the scriptures below, as well as in the ethics of most atheists.

Christianity: Whatever you wish that men would do to you, do so to them. Matthew 7.12
Judaism: What is hateful to you, do not do to your neighbor. Talmud, Shabbat 31a
Islam: Not one of you is a believer until he loves for his brother what he loves for himself. Forty Hadith of an-Nawawi 13
Hinduism: One should not behave towards others in a way which is disagreeable to oneself. This is the essence of morality. Mahabharata, Anusasana Parva 113.8
Buddhism: Comparing oneself to others in such terms as “Just as I am so are they, just as they are so am I,” he should neither kill nor cause others to kill. Sutta Nipata 705
African Traditional: One going to take a pointed stick to pinch a baby bird should first try it on himself to feel how it hurts. Yoruba Proverb (Nigeria)
Confucianism: Do not do to others what you do not want them to do to you.” Analects 15.23

Many religions host organizations for peace such as the Episcopal Peace Fellowship, Pax Christi, the Jewish Voice for Peace, Muslims For Peace, the Buddhist Peace Fellowship, Yakjah (a Hindu peace organization working in the Kashmir), etc. Many interfaith peace organizations are also thriving from the oldest, the Fellowship of Reconciliation, United Religions Initiative, and Religions for Peace USA to numerous recent foundings such as Multi-faith Voices for Peace and Justice, founded in 2003. The World Council of Churches is heading up a campaign to abolish nuclear weapons.

All of the above is evidence for a growing culture of peace around the world.

See other posts related to “Creating a Culture of Peace”

Notes:
14. Two historically antagonistic perspectives are: (1) religion is the only way to peace; (2) religion is inherently conflictual. A more flexible perspective is peace through religion where the role of religious thinking in the public sphere and the potential contributions of religion are examined. (return to main article)