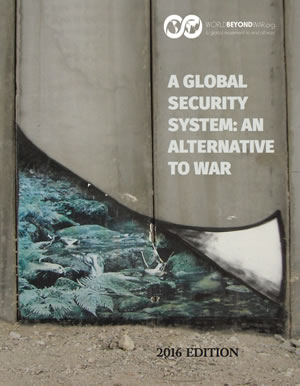 To use the new online study and action guide, click here: Study War No More!

World Beyond War is pleased to provide the 2016 edition of the book that everyone has been asking for: A Global Security System: An Alternative to War. It describes the “hardware” of creating a peace system, and the “software” — the values and concepts — necessary to operate a peace system and the means to spread these globally. Key sections include:

* Why is an Alternative Global Security System both Desirable and Necessary?
* Why we Think a Peace System is Possible
* Common Security
* Demilitarizing Security
* Managing International and Civil Conflicts
* International Non-government Organizations: The Role of Global Civil Society
* Creating a Culture of Peace
* Accelerating The Transition To An Alternative Security System

This report is based on the work of many experts in international relations and peace studies and on the experience of many activists. It is intended to be an evolving plan as we gain more and more experience. The historic end of war is now possible if we muster the will to act and so save ourselves and the planet from ever greater catastrophe. World Beyond War firmly believes that we can do this.

You can obtain A Global Security System: An Alternative to War in multiple formats:

PRINT EDITION of A Global Security System: An Alternative to War

Available at your local bookstore or any online bookseller. The distributor is Ingram. The ISBN is 978-0-9980859-1-3. Buy online at Amazon, or Barnes and Noble.

Or buy in bulk for a discount here.

First Edition from 2015 is here in multiple formats.

Joe Scarry did web-design and publication in 2015.