Four drone resisters, James Ricks, Daniel Burns, Brian Hynes, and Ed Kinane, from the 2015 big books action were found innocent of all charges at 11pm at the Dewitt Town Court. After deliberating for only about a half hour, the jury returned with a verdict of not guilty on all charges. Applause erupted in the courtroom upon the jurors’ announcement of the verdict. The four were charged with obstruction of government administration, disorderly conduct, and trespass and faced a year in jail. Following the rendering of the verdict, a juror approached Brian Hynes and said “I really support what you are doing. Keep doing it.”

During the trial, Brian Hynes told the jury, “This is not a case about contested facts, this is a case about contested meanings.” Hynes went on to explain to the jury that they could, in the words of the 4th Circuit of Appeals, acquit for any reason which appeals to their logic or passion. In powerful testimony, James Ricks told the jury about meeting the families of drone victims and seeing the wreckage of hellfire missiles. Jurors were brought to tears several times. Daniel Burns said, “Would any of us deem it acceptable for our precious loved ones to be sacrificed for another nation’s anticipatory self defense. Of course not!  Moreover, if drones were being aimed at my children by another country, I would hope with all my might that the citizens of that country might try and stop their country’s illegal and immoral actions.” Ed Kinane told the jury in clear and powerful language about his time living in Iraq during the war and about the terror sown by drones. Closing arguments were given by lawyers Daire Irwin and Jonathon Wallace as well as James Ricks and Brian Hynes.

The trail resulted from an action on March 19, 2015. On the 12th anniversary of the U.S.’ illegal invasion of Iraq, seven members of the Upstate Coalition to Ground the Drones and End the Wars shut the main gate of the Hancock Drone Base (near Syracuse, NY) with a giant copy of the UN Charter and three other giant books – Dirty Wars (Jeremy Scahill), Living Under Drones (NYU and Stanford Law Schools), and You Never Die Twice (Reprieve).

The nonviolent activists also held a banner quoting Article 6 of the U.S. Constitution, stating that every treaty signed becomes the supreme law of the land. They brought the books to Hancock to remind everyone at the base of the signed treaties that prohibit the killing of civilians and assassinations of human beings. The group attempted yet again to deliver a citizens’ indictment for war crimes to the Hancock Air base chain of command. 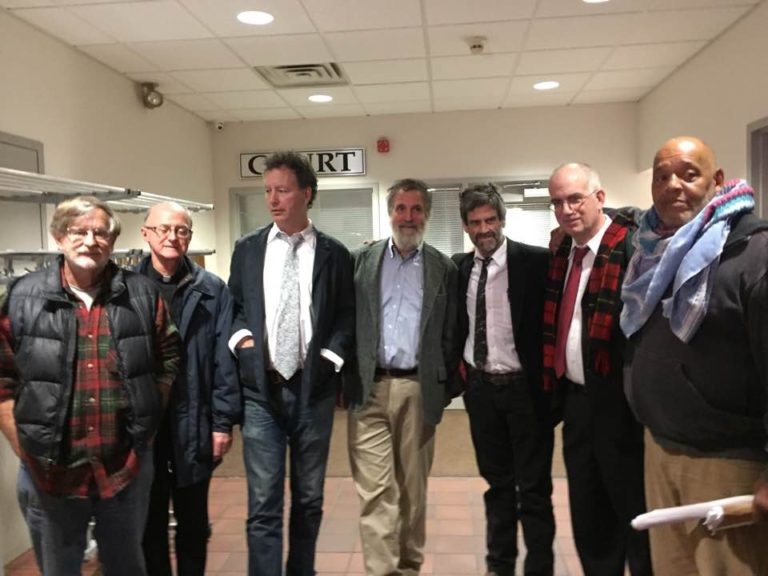