Demilitarizing The Response To Climate Change 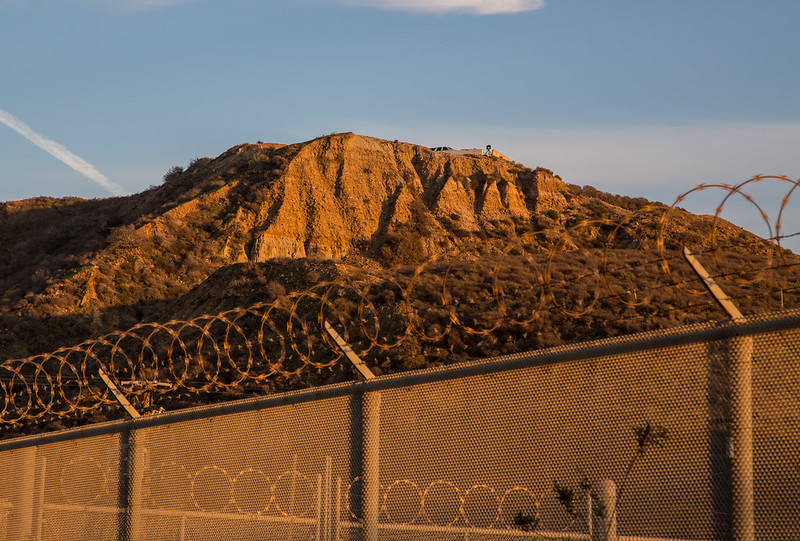 In the context of global climate change:

A range of policy options are available to countries to address and respond to climate change. Looking specifically at the U.S., the authors of this study argue that these policy options are viewed through the lens of geopopulationism, leading governments to treat the militarization of national borders as an option on par with efforts to reduce carbon emissions. Countries have identified climate-induced migration (particularly from the Global South to the Global North) as a prominent risk of climate change, framing it as a security threat that requires border walls, armed patrols, and imprisonment.

Geopopulationism: “discriminatory practices of space-making aimed at managing human populations, by controlling or restricting their mobility and/or access to particular places.” The authors of this article apply this framework to how countries traditionally determine their security threats. In a state-based international system, people are understood to belong to territorially defined states (countries), and those states are seen to be in competition with each other.

The authors criticize this framing, which they contend stems from a geopopulationist framework wherein people belong to territorially defined countries and these countries are in competition with each other to secure their interests. Instead, they seek an alternative response to climate change. Pulling from feminist scholarship, the authors look to social movements—the North American Sanctuary Movement and #BlackLivesMatter—to learn how to mobilize wide participation and broaden conceptions of security.

The authors start by tracing the securitization of climate policy in the U.S. They pull evidence from sources like a 2003 Pentagon-commissioned report showing how the U.S. military assessed climate-induced migration as a major national security threat of climate change, necessitating strengthened borders to fend off “unwanted starving immigrants from the Caribbean islands, Mexico, and South America.”[1] This geopopulationist framing continued throughout subsequent U.S. administrations, leading U.S. officials to treat climate-induced human migration to the U.S. as a top security threat resulting from climate change.

As such, the authors note that “the dangers of global climate change, then, are understood not as involving uncontrolled emissions, ocean acidification, drought, extreme weather, sea level rise, or the impacts of these on human wellbeing, per se—but rather the [human migration] that these outcomes are imagined as likely to trigger.” Here, the authors pull from feminist scholarship on alter-geopolitics demonstrating how geopopulationist logic produces insecurity and a carelessness towards the lived experiences of individuals and communities. The aforementioned social movements are challenging this geopopulationist logic by broadening the definition of security and making it more inclusive of the lived experiences of those directly in harm’s way—an approach that points to another way forward in our response to climate change.

Alter-Geopolitics: An alternative to geopolitics that “expose[s] how security policy and practice at the scale of [the] nation-state actively produce and distribute insecurity across axes of power and difference,” and shows how “actions and collectives developed across literal and symbolic borders broaden, disseminate, distribute, and regenerate security as an expansive and inclusive project.” Koopman, S. (2011). Alter-geopolitics: Other securities are happening. Geoforum, 42(3), 274-284.

First, the North American Sanctuary Movement began as a network of activists, churches, synagogues, universities, labor unions, and municipalities reacting to the treatment of asylum seekers from Central America in the 1980s—many of whom were fleeing violence at the hands of U.S.-backed governments in countries like El Salvador, Guatemala, and Honduras. This movement directly confronted and exposed the U.S.’s geopopulationist logic—wherein the U.S. backed violent governments as an expression of its security interests and then tried to prevent affected populations from finding refuge in the U.S.—by building transboundary solidarity among individuals and communities exposed to harm. This solidarity demonstrated that the pursuit of U.S. security actually produced insecurity for numerous individuals and communities as they fled state-sanctioned violence. The movement advocated for policy solutions, like the creation of the Temporary Protected Status category in U.S. refugee law.

Second, the #BlackLivesMatter movement has made explicit connections between racist violence and the unequal exposure to environmental harms felt by communities of color. This dynamic is only made more severe by the failed management of climate change. The movement’s policy platform calls not only for “tackling racist police violence, mass incarceration and other structural drivers of inequality and premature death” but also for “public divestment from fossil fuels, alongside community-controlled investments in education, healthcare and sustainable energy.” The movement draws connections between the disparities communities of color face in relation to environmental harm and the dominant geopopulationist logic, which fails to acknowledge that insecurity or address its root causes.

The effects of climate change are felt beyond political borders, demanding a more inclusive definition of security that goes well beyond that outlined in geopopulationism. In examining the social movements in this study, the authors begin to shape an alternative approach to climate change policy based on more inclusive conceptions of security. First, drawn from the experience of #BlackLivesMatter, is to understand that climate change contributes to the insecurity communities of color already experience due to environmental racism. Next, there are opportunities for transboundary solidarity, as the Sanctuary Movement demonstrated, to push back against a narrow assessment of climate change-induced insecurity, which calls for the fortification of national borders while neglecting the other environmental harms that affect human well-being.

At the time that this analysis is written, the world is experiencing the fallout of yet another global security threat—a global pandemic. The rapid spread of the coronavirus is exposing flaws in healthcare systems and demonstrating the utter lack of preparedness in many countries, mostly notably the U.S. We are collectively bracing for the impact of the preventable loss of lives as COVID-19 becomes the second leading cause of death in the United States this past week, not to mention the significant economic effects (estimates of upwards of 30% unemployment) that this crisis will exert in the many months and years to come. It’s leading many peace and security experts to draw comparisons to war but also leading many of these same experts to a shared conclusion: how safe are we really?

For decades, U.S. national security has focused on protecting American lives against the threat of foreign terrorism and furthering U.S. “security interests” aboard. This security strategy has led to a ballooning defense budget, failed military interventions, and the loss of countless lives, whether foreign civilians and fighters or U.S. military personnel—all of it justified by the belief that these actions made Americans safe. However, the narrow lens through which the U.S. has perceived and defined its “security interests” has stunted our ability to respond to the largest, existential crises that threaten our common security—a global pandemic and climate change.

The authors of this article rightly pull from feminist scholarship and social movements to articulate alternatives to this militarized approach to climate change. Relatedly, feminist foreign policy is an emerging framework that, according to the Centre for Feminist Foreign Policy, “elevates the everyday lived experience of marginalized communities to the forefront and provides a broader and deeper analysis of global issues.” Along with alter-geopolitics, a feminist foreign policy offers a dramatically different interpretation of what makes us secure. It illustrates that security does not result from competition between countries. Rather, we are more secure when we ensure that others are more secure. Crises like this global pandemic and climate change are understood as security threats because of their significant negative impact on the lives of individuals and communities around the world, not solely because they interfere with countries’ “security interests.” The most effective response in either case is not to militarize our borders or impose travel restrictions but to save lives by cooperating with others and enacting solutions that address the roots of the problem.