Misneach (mish-nyuhkh) is an Irish word meaning something like bravery, courage, spirit. 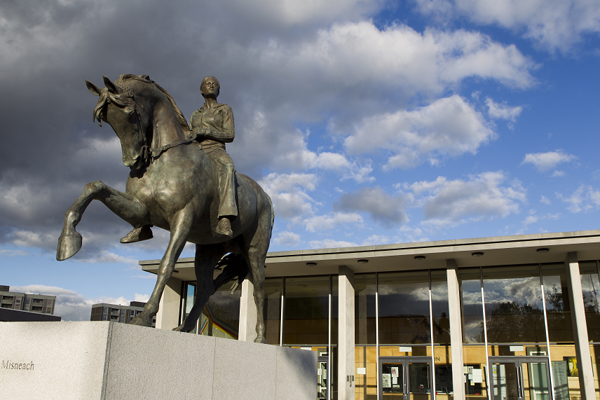 The Irish could use more misneach, as we all could. Ireland is failing to stand up to the U.S. military and its use of Ireland. And when a couple of people from the U.S. stand up in Ireland, they’re forbidden to leave the country — as if their misneach can’t be spared, as the stuff is in such low supply. For a recent conference in Limerick, I noted in limericks:

Green Ireland has a peaceful blue sky.
Yet Shannon’s got war planes, and why?
When Emperor Trump
Tells Ireland to jump
Ireland bows down and asks him “How high?”

Neutral Ireland takes no part in war
Except that troops carry weapons galore
Through the airport at Shannon
While mass slaughters they’re planning
For far off from their two-dollar . . .

Do you want to hear more?

If you ask me the Irish know better.
They’ve seen dead that could not have been deader.
A true friend to the Yanks
Would say thanks but no thanks.
Here comes peace strolling by. Have you met her?

What they have done in Dublin that offers a model of misneach for my hometown of Charlottesville is they’ve put up a statue called Misneach. It depicts a girl in sweatshirt and sweatpants riding a horse.

Now, there used to be a statue in Phoenix Park in Dublin of a British imperialist war hero named Lord Gough (rhymes with Torrid Cough). He sat proudly with his chest puffed out, hand on hip, sword on display, a typical war monument. He repeatedly ran into trouble. In 1944 he was beheaded and desworded, but the head was found in the River Liffey and stuck back on. In 1956, the horse lost his right hind leg, and the next year the whole statue was destroyed and removed. Of one of the efforts to remove Lord Gough, a poet by the name of Vincent Caprani wrote (with what accuracy I know not):

There are strange things done from twelve to one
In the Hollow at Phaynix Park,
There’s maidens mobbed and gentlemen robbed
In the bushes after dark;
But the strangest of all within human recall
Concerns the statue of Gough,
‘Twas a terrible fact, and a most wicked act,
For his bollix they tried to blow off!

‘Neath the horse’s big prick a dynamite stick
Some gallant ‘hayro’ did place,
For the cause of our land, with a match in his hand
Bravely the foe he did face;
Then without showing fear – and standing well clear –
He expected to blow up the pair
But he nearly went crackers, all he got was the knackers
And he made the poor stallion a mare!

For his tactics were wrong, and the prick was too long
(the horse being more than a foal)
It would answer him better, this dynamite setter,
The stick to shove up his own hole!
For this is the way our ‘haroes’ today
Are challenging England’s might,
With a stab in the back and a midnight attack
On a statue that can’t even shite!

Indeed, might a daylight mass-protest and removal have shown a bit more misneach?

Now, Gough and his horse were restored in England, and the sculptor of Misneach created a replica of Gough’s horse, but put a girl with no uniform or weapons on it.

Here in Virginia we’ve got giant horse statues galore, each carrying a sword wielding glorification of war. We’ve proposed moving them out of the centers of towns and displaying them with explanations of when they went up and why. We’ve given the political party that’s been out of power for a quarter century majorities in Richmond. If that doesn’t work, I suppose there’s always the option of knocking each general off his steed and replacing him with an athlete or artist or musician or teacher or parent or activist or scholar or poet.

Misneach is a word recommended to us for common use by a new book called An Ecotopian Lexicon, edited by Matthew Schneider-Mayerson and Brent Ryan Bellamy. It lists new words devised by the authors, or recommended for borrowing from other languages, or created by science-fiction or other sources. Misneach is only one of many good ones.

A disturbing number of the words are tied to religions, mysticism, or equally fantastic beliefs about colonizing foreign planets. Even more are devoted to hope or hopieness, despair, and other self-centered reactions. But some are dedicated to action, including:

Blockadia, noun, that ever-changing area of land where people are living in order to block pipelines, mines, and other forms of destruction.

Terragouge, verb, what is done to the earth be extractive and destructive activities.

Ildsjel, Norwegian noun, meaning activist but perhaps not yet beaten down into a pejorative term.

Apocalypso, noun, a vision or text that suggests carrying on in the face of the apocalyptic.