Bombshell Report: Global Warming Poses a Threat to US Ammo 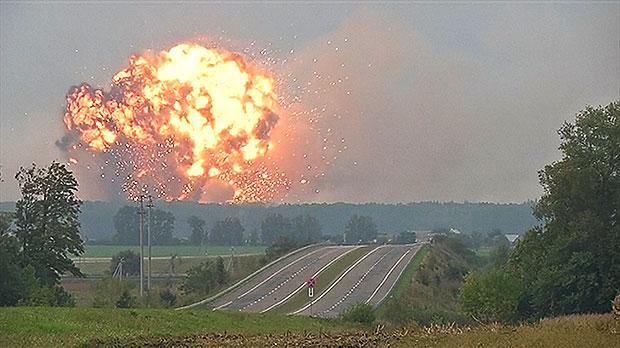 by Marc Kodack / The Center for Climate & Security, Environmentalist Against War, August 20, 2021

(December 23, 2019) — Climate change will affect bulk commodities, e.g., ammunition, that the US Amy relies on in combat operations. As temperatures increase in arid areas of the world, such as the Middle East (which is critically important to US national security), the storage of ammunition and explosives (AE) under extreme temperatures can lead to instability and possible unplanned detonations.

Munitions can withstand short-term rises in severe temperature. Heat-related detonations are 60% more likely in ammunition depots between late April and mid-September when higher temperatures occur in areas such as the Middle East. From the article:

Without regular monitoring, heated explosive materials within munitions can force their way through seals and filler plugs, a shell casing’s weakest points. Nitroglycerin becomes so sensitive when it absorbs moisture that even a slight shake can set it off…The physical effect of abnormally high temperatures is that a high level of stress occurs between components because of the different expansion rates of the individual materials…Higher temperatures also raise the risk of handling errors by fatigued armorers.

This significantly raises risks for safe handling and storage. The US Army has procedures for AE storage in tactical situations, which can vary from a storage facility to an open area with/without containers. AE can be stored on the ground or an unimproved surface.

According to the Army’s 2016 guidance on the issue, many “AE items are extremely sensitive to heat and react at temperatures substantially lower than those required to ignite ordinary wood, paper, and fabrics…deterioration is faster when moisture is combined with a rise in temperature.” Climate change is not mentioned as a variable that needs to be considered when planning for storage of AE, however.

Regulating temperatures in arid environments within an acceptable range that does not lower AE usability, whether the AE is stored inside a facility or in the open, will be challenging. The increased temperatures from climate change will exacerbate all tactical storage conditions. This also includes any captured munitions that need to be secured and stored. Ensuring that sufficient AE of the types and quantifies remain viable and available for use when needed, is another area where climate change will affect the Army’s ability to project power and achieve its operational objectives as part of the Joint Force.

Posted in accordance with Title 17, Section 107, US Code, for noncommercial, educational purposes.

Climate Change May Be Blowing Up Arms Depots

More intense heat waves can destabilize the components of munitions, particularly where explosives are not properly stored

(Novermber 14, 2019) — It was a little before 4 A.M., on an airless morning in June 2018, when the arms depot in Baharka, Iraqi Kurdistan, blew up. Brightening the dawn sky for kilometers around, the blast sent rockets, bullets and artillery rounds hurtling in every direction. Officials say no one was killed. But were it not for the early hour and reduced garrison, the death toll might well have been horrendous.

A year later, another arsenal exploded just to the southwest of Baharka, reportedly destroying millions of dollars’ worth of ammunition amassed during the fight against ISIS. Two similar blasts around Baghdad followed a few weeks after that, killing and wounding dozens of people between them. Before the end of this past summer, at least six munitions sites had gone up in flames in Iraq alone, according to Iraqi security sources.

While details of the blasts were scarce, investigators agreed that most incidents shared a common theme: hot weather. Each explosion came in the midst of a long, scorching Iraqi summer, when temperatures routinely topped 45 degrees Celsius (113 degrees Fahrenheit). And they all struck just as powerful heat waves ramped up. Explosives experts say such intense heat can weaken munitions’ structural integrity, cause the thermal expansion of explosive chemicals and damage protective shields.

As climate change raises summer temperatures and boosts the number and severity of heat waves the world over, weapons experts warn of more of such unplanned explosions at munitions sites, or UEMS — particularly in places that are already steeped in conflict or have poor stockpile management, or both.

This potent combination is fueling a spate of destruction and death that has residents of heavily militarized areas on edge. “As soon as it gets hot, we fear the worst,” says Emad Hassan, a welder in Dora, a Baghdad neighborhood that has experienced several depot disasters.

It Just Takes One

There is no comprehensive set of statistics that specifically covers such heat-related detonations — not least because they often kill any nearby witnesses and destroy evidence, making it difficult to determine exactly what triggers these events. But using data from the Small Arms Survey, an arms-monitoring project based in Geneva, an analysis done by the author of this article suggests that UEMS are roughly 60 percent more likely between late April and mid-September.

Those data also show that about 25 percent of such depot disasters go unexplained. Another fifth are thought to be related to environmental conditions — which suggests heat might already be one of their leading causes — according to a dozen weapons experts and military officials interviewed for this article.

Most munitions are designed to withstand severe heat but only in the relatively short term. If exposed to extreme temperatures and humidity for long enough, a munition can become unstable and may even more or less strip itself apart. The wood in antipersonnel stake mines rots; rubber and plastic in plastic mines can shatter in the unrelenting sun. Without regular monitoring, heated explosive materials within munitions can force their way through seals and filler plugs, a shell casing’s weakest points. Nitroglycerin becomes so sensitive when it absorbs moisture that even a slight shake can set it off. White phosphorus melts into a liquid at 44 degrees C and can crack a munition’s outer casing as it expands and contracts with the temperature.

When explosives leak out, some react with impurities in the air to form dangerously volatile crystals on the exterior that can explode with friction or motion. “The physical effect of abnormally high temperatures is that a high level of stress occurs between components because of the different expansion rates of the individual materials,” says John Montgomery, chief technical adviser for explosive ordnance disposal at the Halo Trust, a land-mine-clearance nonprofit organization.

Mortar shells, rockets and artillery rounds are particularly vulnerable because they are powered by propellants that make them liable to launch at the slightest provocation. Chemical stabilizers prevent self-ignition. But for every five-degree-C increase above its ideal storage temperature, the stabilizer depletes by a factor of 1.7, according to the Halo Trust. That depletion accelerates if munitions are exposed to a wide temperature swing over the course of the day.

Eventually, there is no more stabilizer — and as a consequence, sometimes no more munitions site either. Most of Cyprus lost electricity in July 2011 when the nation’s principal power station was taken out by 98 shipping containers full of confiscated Iranian munitions that exploded after cooking for months under the Mediterranean sun, eroding their propellants.

Higher temperatures also raise the risk of handling errors by fatigued armorers. From chaotic conflict zones to the best-equipped NATO-standard storage facilities, soldiers say summer is when explosive accidents peak because of a combination of foggy decision-making and more sensitive munitions, both caused by extreme heat. “In the military, everything is more difficult when it’s summer,” says an Iraqi artillery officer who gives his name as Ali. “And now summer never ends.”

Climate projections vary across the Middle East and North Africa, but the hottest temperatures in those regions could rise by up to seven degrees C by 2100, a 2016 study in Climatic Change concluded. And a 2015 study found that coastal cities in the Middle East will see a rise in events with both high heat and humidity. These trends set up the possibility of more UEMS in the future.

Though the overall number of UEMS seemed to be shrinking in recent decades, as antiquated cold war-era arms were used up or decommissioned, soaring temperatures appear to have been undermining that success in the past few years, says Adrian Wilkinson, a longtime weapons inspector for the United Nations and other organizations.

Munitions in much of the developing world are degrading at a quicker pace than in the past because of heat exposure, and armies are failing to dispose of them on time, say arms experts and military officials interviewed for this story.

In some of the world’s geopolitical hotspots, the nonprofessional nature of many armed groups means they have less technical know-how and often house munitions in ad hoc facilities, where there can be more exposure to direct sunlight and rough treatment, according to independent arms-control expert Benjamin King. And because climate change may be contributing to violence in many of the same places where heat-related UEMS are proliferating, these explosions could hinder the military readiness of some states at their time of greatest need.

There are practical ways to address the problem, though. By keeping munitions in temperature-controlled facilities with surroundings kept clear of brush and other flammable material, militaries with poor safety records can reduce their depots’ vulnerability to intensifying heat and other environmental phenomena, Wilkinson says. I

ndia learned this lesson in 2000, when long grass caught fire in the heat and spread flames into a stash of explosives, killing five people. The deadliest UEMS, including one in 2002 that killed more than 1,000 people in Nigeria, were in urban areas — so by building in isolated locations with few residents, armies can also minimize the fallout if the worst does come to pass.

Even more importantly, militaries need to get a better grip on their inventories, say multiple experts and the nonprofit Geneva International Center for Humanitarian Demining. Uncertain of what they possess in many cases, depot commanders do not necessarily know when various munitions ought to be destroyed.

“You’ve got to have all the records and documentation related to storage, temperature changes, humidity and more. It’s got to be a system with full accountability,” says Blaz Mihelic, a former weapons inspector and current project manager at ITF Enhancing Human Security, a Slovenian nonprofit that works on arms reduction.

But for all those improvements to happen, there is going to have to be a sea change in attitudes, arms experts say. Many militaries do not make stored munitions much of a priority, and they — and environmentalists — are not thrilled at the prospect of having to go through the expensive and sometimes polluting process of destroying and refreshing their stockpiles more frequently.

“It can be difficult to get any government to focus on ammunition unless something bad happens, because it’s just not a sexy topic,” says Robin Mossinkoff, head of the support section at the Forum for Security Co-operation at the intergovernmental Organization for Security and Co-operation in Europe. “But if you can afford to spend $300 million on new weapons, you can afford to do this.”

Posted in accordance with Title 17, Section 107, US Code, for noncommercial, educational purposes