Belgium Debates Phase-Out Of US Nuclear Weapons On Its Soil 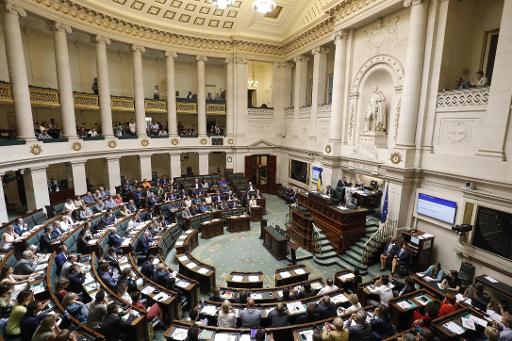 It’s one of Belgium’s worst kept secrets. Lawmakers on Thursday (16 January) narrowly rejected a resolution asking for the removal of US nuclear weapons stationed in the country and joining the UN Treaty on the Prohibition of Nuclear Weapons (TPNW).

66 MPs voted in favour of the resolution while 74 rejected it.

Those in favour included the Socialists, Greens, centrists (cdH), the workers party (PVDA) and the francophone party DéFI. The 74 that voted against included the nationalist Flemish party N-VA, the Flemish Christian Democrats (CD&V), the far-right Vlaams Belang and both Flemish and francophone Liberals.

Just before the Christmas recess, the parliament’s Foreign Affairs Committee approved a motion calling for the withdrawal of nuclear weapons from Belgian territory and the accession of Belgium to the International Treaty on the Prohibition of Nuclear Weapons. The resolution was led by Flemish socialist John Crombez (sp.a).

With this resolution, the chamber requested the Belgian government “to draw up, as soon as possible, a roadmap aiming at the withdrawal of nuclear weapons on Belgian territory”.

The December resolution was voted in the absence of two liberal MPs, even though the text was already watered down.

According to Flemish daily De Morgen, the American ambassador to Belgium was “particularly worried” about the resolution before Thursday’s vote and a number of MPs were approached by the US embassy for a discussion.

The controversy was sparked by a debate to replace the US-made F-16 fighter aircraft in the Belgian army with American F-35s, a more advanced plane capable of carrying nuclear weapons.

A “most poorly kept secret”

For a long time, and in contrast with other countries, there has been no public debate about the presence of nuclear weapons on Belgian soil.

A July 2019 draft report entitled ‘A New Era for Nuclear Deterrence?’ and published by the NATO Parliamentary Assembly, confirmed that Belgium is one of several European countries storing US nuclear weapons as part of NATO’s nuclear sharing agreement. The weapons are stationed at Kleine Brogel airbase, in the province of Limburg.

Although the Belgian government had so far adopted a policy of “to neither confirm, nor deny” their presence on Belgian soil, military officials have called it one of Belgium’s “most poorly kept secrets”.

According to De Morgen, which obtained a leaked copy of the document before its final paragraph was replaced, the report stated:

“In the context of NATO, the United States is deploying around 150 nuclear weapons in Europe, in particular B61 free-bombs, which can be deployed by both US and Allied planes. These bombs are stored in six American and European bases: Kleine Brogel in Belgium, Büchel in Germany, Aviano and Ghedi-Torre in Italy, Volkel in the Netherlands and Inçirlik in Turkey.”

The latest paragraph looks like it was copied from a recent EURACTIV article.

The later updated version of the report did away with the specifications, but the  leaked documents confirm what had been assumed for some time.

Earlier in 2019, the American Bulletin of the Atomic Scientists noted in its annual report that Kleine Brogel possessed no less than twenty nuclear weapons. The report is used as a source in the final version of the report presented by a member of the NATO Parliamentary Assembly.

Asked about the current Belgian debate, a NATO official told EURACTIV that a nuclear capacity is needed “to maintain peace and avert aggression” from the outside. “NATO’s goal is a world without nuclear weapons but as long as they exist, NATO will remain a nuclear Alliance”.

Theo Francken, a Flemish nationalist lawmaker from the N-VA party, spoke in favour of keeping US weapons on Belgian territory: “just think of the return we would receive from NATO headquarters in our country, which puts Brussels on the world map,” he said ahead of the vote.

“When it comes to a financial contribution to NATO, we are already among the worst in the class. A withdrawal of nuclear weapons is not a good signal to President Trump. You can play with it, but you don’t have to rattle it,” said Francken who is also the Belgian delegation leader at the NATO Parliamentary Assembly.

Belgium currently does not meet NATO’s target of raising defence spending to 2% of the country’s GDP. Belgian officials repeatedly suggested that hosting US nuclear weapons in Kleine Brogel make critics in the alliance turn a blind eye to those shortcomings.

The cornerstone of Belgium’s policy on nuclear weapons is the Non-Proliferation Treaty (NPT), which Belgium signed in 1968 and ratified in 1975. The treaty contains the three objectives of non-proliferation, ultimate elimination of all nuclear weapons and the international cooperation in the peaceful use of nuclear energy.

“Within the EU, Belgium has made special efforts to achieve significant and balanced positions with which both the European nuclear weapon states and the other EU member states can concur,” the Belgian government position says.

Belgium, as a NATO country, so far has not supported the 2017 UN Treaty on the Prohibition of Nuclear Weapons (TPNW), the first legally binding international agreement to comprehensively prohibit nuclear weapons, with the goal of leading towards their total elimination.

However, the resolution voted on Thursday was meant to change that. A public opinion poll conducted by YouGov in April 2019 found that 64% of Belgians believe that their government should sign the treaty, with only 17% opposed to signing.