Back to the Future: Universalizing Resistance, Democratizing Power

Every year to celebrate Independence Day, I watch the film 1776, based on the hit Broadway play. It is centered on the writing of the Declaration of Independence. If you know your history, it effectively pokes fun at our founding myth. It also reminds me of the conditions under which these men lived and makes me truly grateful for screened windows, electric fans, and ballpoint pens. It never fails to set me thinking about all the what-ifs that could have or should have happened since July 4, 1776. 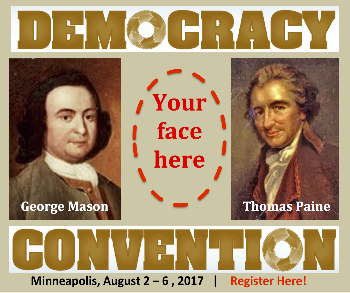 The democrats lost the debate. Thomas Paine, George Mason, Patrick Henry, to name just a few, dedicated their lives to democracy building and fought mightily to incorporate it into the Constitution. Paine wrote:

When it can be said by any country in the world, my poor are happy, neither ignorance nor distress is to be found among them, my jails are empty of prisoners, my streets of beggars, the aged are not in want, the taxes are not oppressive, the rational world is my friend because I am the friend of happiness. When these things can be said, then may that country boast its constitution and government. Independence is my happiness, the world is my country and my religion is to do good.

Their efforts combined with many others forced the Bill of Rights into the Constitution—as Amendments. In the original Constitution, We the People had no rights. Let that one sink in so you can engender the appropriate reaction next time you hear a public official described as a strict constitutionalist — that person wants to take away what exists of your rights if you are not white, male, and wealthy!

Going back to the future, our Constitution has actually produced “a long train of abuses and usurpations” against We the People, in the same way King George tyrannized the colonies. Through much struggle, We the People now encompasses many more of us, but We the People and the government we employ are at cross-purposes. What if we had an authentic participatory democracy? What if our elected officials actually represented the people instead of the corporations—the property now running the country?

What if the democratic founding fathers had won the debate during the Second Constitutional Congress? That answer will eternally elude us, but it shouldn’t stop us from attempting to carry out that vision.

What if democrats came together today to form real democracy? What if the Constitution was a democratic document? What if democracy existed in our economy, schools, and media? What about rights of nature? All of these questions have answers, which can be found working in collaboration with each other in Minneapolis, August 2-6, at the Democracy Convention and beyond.

This is not a partisan convention. It isn’t sponsored by political parties or their operatives. It isn’t backed by corporate special interests. It is small “d” democrats coming together to give rise to a democracy movement so the promise of Paine’s version of American Democracy based in human rights is realized. The Democracy Convention is eight different conferences under one roof, and it is incredibly affordable, to make it possible for all to attend.

We were promised a democracy and we deserve it. For every person upset about Trump, the climate crisis, healthcare, education, the MIC, surveillance, the PIC, media consolidation, Internet freedom, etc., the Democracy Convention is a place to meet like-minded people ready to roll up their sleeves and get to work building the movement for authentic democracy.

We know the U.S. Constitution is a property rights document, that corporations are property and are also in control of key government roles, and our elected officials for the most part do not represent the People’s best interests. The system is completely and utterly broken, and only We the People, like our democratic American Revolutionary counterparts, have the power to fix it. It comes down to fighting for what is right and is ours already: universalizing resistance and democratizing power.

Our All is at Stake, and the little Conveniencys and Comforts of Life, when set in Competition with our Liberty, ought to be rejected not with Reluctance but with Pleasure.

What if the colonists had televisions? Would there have been an American Revolution? With Paine, Mason and our other democratic founders in my head and heart, I’m going back to the future August 2-6 at the Democracy Convention!

This work is licensed under a Creative Commons Attribution-Share Alike 3.0 License

For the past six years, Laura Bonham has been a member of Move to Amend’s National Leadership team and a contributing wordsmith in Move to Amend’s communication department. She is a community organizer, former candidate for state office, and a small business owner.