Hiroshima And Nagasaki As Collateral Damage 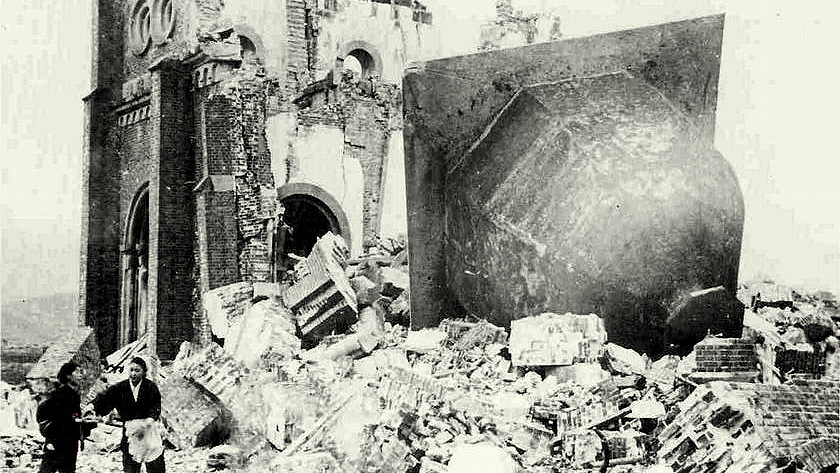 August 6, 1945 found me in a car with my uncle, Frank Pryal.  A NYC plainclothes detective, Uncle Frank drove through the busy streets of Manhattan up to the Central Park Zoo to meet his friend Joe.  It was a lively place with families enjoying the animals.  Joe, a gorilla, saw Uncle Frank coming and began beating on his chest as we approached.  Frank took a cigar from his suit coat pocket, lit it, and gave it to him.  Joe took a long drag and blew smoke at us… I remember laughing so hard that I had to bend over to stop.

Uncle Frank and I had no idea at the time, but on that same day in Hiroshima, Japanese children, their parents, and of course, their pets, were incinerated in the most infamous act in human history, the United States attacking the people of Hiroshima with an atomic bomb.

As a 10 year old American boy who loved the war, the destruction of Hiroshima left me with no compassion, or sorrow.  Like other Americans, I was brainwashed into believing that war was part of human nature and that killing was normal.  I thought it was cool when earlier reports from Europe told us that our blockbuster bombs could destroy entire city blocks in Germany.  The people who lived in those city blocks were of little concern to me.  After all, we were “winning” the war.

Merriam Webster defines collateral damage as “injury inflicted on something other than an intended target. Specifically: civilian casualties of a military operation.

The myth that the atomic bombing prevented thousands of American deaths is mere propaganda still believed by most Americans to this day.  Admiral William Leahy, in command of U.S. Pacific forces, said “It is my opinion that the use of this barbarous weapon at Hiroshima and Nagasaki was of no material assistance in our war against Japan. The Japanese were already defeated and ready to surrender because of the effective sea blockade.”  Ultimately, sixty-five Japanese cities were in ashes.  General Dwight D. Eisenhower said in a Newsweek interview “The Japanese were ready to surrender and it wasn’t necessary to hit them with that awful thing.”

On Christmas  1991, my wife Helene, her sister Mary, our daughter Mary Ellen and son Terry joined hands in silence at the Hiroshima site where the Christian crew of a U.S. bomber incinerated tens of thousands of Japanese civilians on that fateful day.  We also meditated on another horrific event.  A mere three days later, on August 9, 1945, a second American bomber with a baptized Christian crew would use the Catholic Cathedral in Nagasaki as ground zero to explode a plutonium bomb incinerating the largest Christian population in Asia.

Are American children today still brainwashed about war?  Is the Covid-19 pandemic a teachable moment to illustrate to children the worth of all brothers and sisters on our planet?  Will this moment in time allow future generations to abandon the immoral, despicable crime  of collateral damage?

A remembrance of the 75th anniversary of the incineration of Hiroshima will be held on Thursday, August 6, at 8 AM at the First Congregational Church, corner of Main and Front Streets, Binghamton, New York, USA.  Masks and physical distancing will be required.  Sponsored by Broome County Peace Action, Veterans for Peace of Broome County, and First Congregational Church.