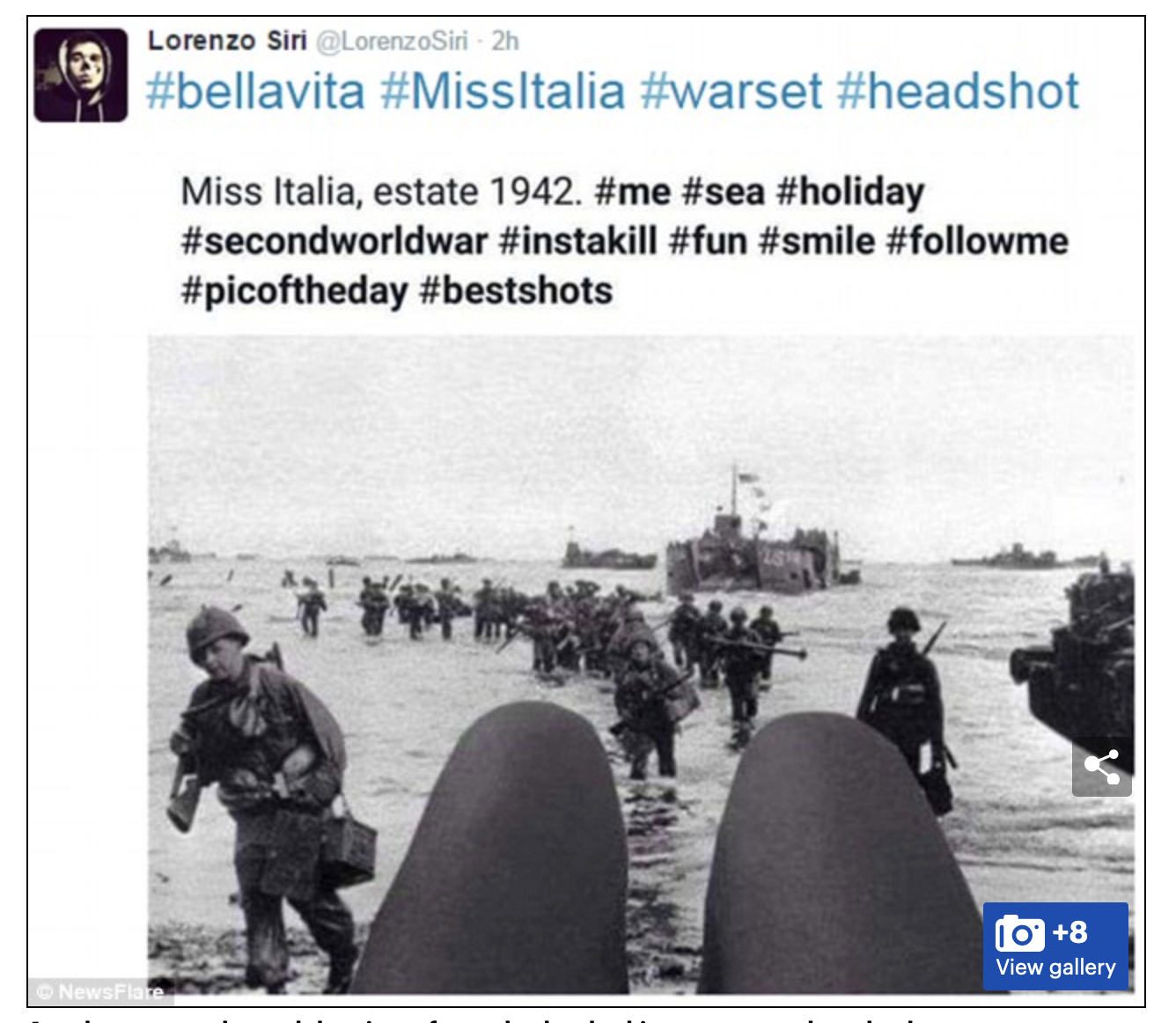 In 2015, Alice Sabatini was an 18-year-old contestant in the Miss Italia contest in Italy. She was asked what epoch of the past she would have liked to live in. She replied: World War II. Her explanation was that her text books go on and on about it, so she’d like to actually see it, and she wouldn’t have to fight in it, because only men did that. This led to a great deal of mockery. Did she want to be bombed or starved or sent to a concentration camp? What was she, stupid? Somebody photoshopped her into a picture with Mussolini and Hitler. Somebody made an image of a sunbather viewing troops rushing onto a beach.

But could an 18-year-old in 2015 have been expected to know that most of the victims of WWII were civilians — men and women and children alike? Who would have told her that? Certainly not her text books. Most definitely not the endless saturation of her culture with WWII-themed entertainment. What answer did anyone think such a contestant would be more likely to give to the question she’d been asked, than WWII? In U.S. culture as well, which heavily influences Italian, a top focus for drama and tragedy and comedy and heroism and historical fiction is WWII. Pick 100 average viewers of Netflix or Amazon and I’m convinced a large percentage of them would give the same answer as Alice Sabatini, who, by the way, was declared the winner of the competition, fit to represent all of Italy or whatever it is Miss Italia does. She ended up suffering from depression, panic attacks, and bad health, after being treated as a national joke.

Joe Biden hasn’t entered any Italian beauty contests (so, you see, he has done something right!), but supposing that Biden went for a stroll on the beach with Sabatini and Vladimir Putin, and they found a magic lamp, and out popped a genie who granted them each the wish to live in any epoch of the past, can there be any doubt that all three of them would have the same answer? Biden and Putin are trying their absolute best to imagine that they are living in World War II right now. Each declares he is fighting Hitlerian forces, even though they are fighting each other. Each declares war and escalation to be absolutely inevitable, and therefore the gravest sin to be “appeasement” of the other side. Each swears the fight to be purely defensive, and yet that defensiveness to require endless fighting for the goal of unconditional surrender by the aggressor.

The lessons both sides have learned from WWII are:

The lessons they ought to have learned are:

But Biden and Putin are not alone in their thinking. They are not made into national jokes for their religious belief in redemptive violence. Nobody takes over their houses, like that of the President of Sri Lanka, because they put the Earth at risk with their childish insistence on organized mass slaughter. Nobody objects to the massive defunding of everything worthwhile to dump unfathomable treasure into war. Resulting famine is a “natural disaster.” The global lack of cooperation on climate or disease is not the result of choosing war but of the unspeakable evil of whichever of the two sides is unspeakably evil.

If we don’t outgrow World War II mythology, it will kill us.