“Ain’t No Such Thing as a Just War” – Ben Salmon, WWI Resister 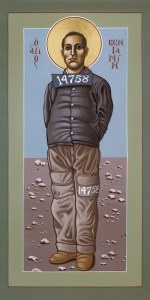 Several days a week, Laurie Hasbrook arrives at the Voices office here in Chicago. She often takes off her bicycle helmet, unpins her pant leg, settles into an office chair and then leans back to give us an update on family and neighborhood news. Laurie’s two youngest sons are teenagers, and because they are black teenagers in Chicago they are at risk of being assaulted and killed simply for being young black men. Laurie has deep empathy for families trapped in war zones. She also firmly believes in silencing all guns.

Lately, we’ve been learning about the extraordinary determination shown by Ben Salmon, a conscientious objector during World War I who went to prison rather than enlist in the U.S. military. Salmon is buried in an unmarked grave in Mount Carmel Cemetery, on the outskirts of Chicago.

In June, 2017, a small group organized by  “Friends of Franz and Ben” gathered at Salmon’s gravesite to commemorate his life.

Mark Scibilla Carver and Jack Gilroy had driven to Chicago from Upstate NY, carrying with them a life size icon bearing an image of Salmon, standing alone in what appeared to be desert sands, wearing a prison-issue uniform that bore his official prison number. Next to the icon was a tall, bare, wooden cross. Rev. Bernie Survil, who organized the vigil at Salmon’s grave, implanted a vigil candle in the ground next to the icon. Salmon’s grand-niece had come from Moab, Utah, to represent the Salmon family. Facing our group, she said that her family deeply admired Salmon’s refusal to cooperate with war. She acknowledged that he had been imprisoned, threatened with execution, sent for a psychiatric evaluation, sentenced to 25 years in prison, a sentence which was eventually commuted, and unable to return to his home in Denver for fear of being killed by antagonists. Charlotte Mates expressed her own determination to try and follow in his footsteps, believing we all have a personal responsibility not to cooperate with wars.

Bernie Survil invited anyone in the circle to step forward with a reflection. Mike Bremer, a carpenter who has spent three months in prison for conscientious objection to nuclear weapons, pulled a folded piece of paper out of his pocket and stepped forward to read from an article by Rev. John Dear, written several years ago, in which Dear notes that Ben Salmon made his brave stance before the world had ever heard of Nelson Mandela, Martin Luther King, or Mohandas Gandhi. There was no Catholic Worker, no Pax Christi, and no War Resisters League to support him. He acted alone, and yet he remains connected to a vast network of people who recognize his courage and will continue telling his story to future generations.

Had his wisdom and that of numerous war resisters in the U.S. prevailed, the U.S. would not have entered W.W. I. The author of War Against War, Michael Kazin, conjectures about how W.W. I would have ended if the U.S. had not intervened. “The carnage might have continued for another year or two,” Kazin writes, “until citizens in the warring nations, who were already protesting the endless sacrifices required, forced their leaders to reach a settlement. If the Allies, led by France and Britain, had not won a total victory, there would have been no punitive peace treaty like that completed at Versailles, no stab-in-the back allegations by resentful Germans, and thus no rise, much less triumph, of Hitler and the Nazis. The next world war, with its 50 million deaths, would probably not have occurred.”

But the U.S. did enter WWI, and since that time each U.S. war has caused a rise in taxpayer contributions to maintain the MIC, the Military-Industrial complex, with its vise-like grip on educating the U.S. public and marketing U.S. wars. Spending for militarism trumps social spending. Here in Chicago, where the number of people killed by gun violence is the highest in the nation, the U.S. military runs ROTC classes enrolling 9,000 youngsters in Chicago public schools. Imagine if equivalent energies were devoted to promoting means and methods of nonviolence, along with ways to end the war against the environment and creation of “green” jobs among Chicago’s youngest generations.

If we could share Laurie’s revulsion in the face of weapons and inequality, imagine the possible results. We would never tolerate U.S. shipment of weapons to opulent Saudi royals who use their newly purchased laser guided munitions and Patriot missiles to devastate the infrastructure and civilians of Yemen. On the brink of famine and afflicted by an alarming spread of cholera, Yemenis also endure Saudi airstrikes that have wrecked roadways, hospitals and crucial sewage and sanitation infrastructure. 20 million people (in regions long plagued by U.S. gamesmanship), would not be expected to die this year from conflict-driven famine, in near-total media silence. Just four countries, Somaliland, Southern Sudan, Nigeria and Yemen are set to lose fully one third as many people as died in the entirety of the Second World War. None of that would be a normal occurrence in our world. Instead, perhaps religious leaders would vigorously remind us about Ben Salmon’s sacrifice; rather than attend the annual Air and Water show, (a theatrical display of U.S. military might which turns out a million “fans”), Chicagoans would make pilgrimages to the cemetery where Ben is buried.

At this point, Mount Carmel cemetery is known for being the burial place of Al Capone.

The small group at the gravesite included a woman from Code Pink, a newly ordained Jesuit priest, several Catholic Workers, several couples who were formerly Catholic religious and have never stopped ministering to others and advocating for social justice, five people who’ve served many months in prison for their conscientious objection to war, and three Chicago area business professionals. We look forward to gatherings, in Chicago and elsewhere, of people who will take up the organizing call of those who celebrated, on July 7th, when representatives of 122 countries negotiated and passed a U.N. ban on nuclear weapons. This event happened while warlords wielding hideous weapons dominated the G20 gathering in Hamburg, Germany.

Laurie envisions building creative, peaceful connections between Chicago youngsters and their counterparts in Afghanistan, Yemen, Gaza, Iraq, and other lands. Ben Salmon guides our endeavors. We hope to again visit Salmon’s gravesite on Armistice Day, November 11, when our friends plan to set up a small marker bearing this inscription:

“There is no such thing as a just war.”

Thou Shalt Not Kill