The U.S. military’s use of firefighting foam that contains potentially dangerous chemical compounds could have serious health consequences for the workers who handle it and those who live nearby.

The Department of Defense had identified 401 military sites that could be contaminated with the toxic compounds, known as PFAS, as of August 2017. The Environmental Working Group and Northeastern University have mapped at least 712 documented cases of PFAS contamination across 49 states, as of July 2019. That map includes contamination on military bases along with industrial plants, commercial airports and firefighting training sites.

PFAS, short for per- and polyfluoroalkyl substances, are found at high levels in a concentrate for a firefighting foam called AFFF, or aqueous film forming foam, which has seeped into groundwater and at times tainted drinking water. The Environmental Working Group estimates more than 100 million Americans could be drinking tap water contaminated with PFAS.

Dubbed “the forever chemical,” PFAS don’t naturally break down in the environment, which explains why some water sources are still contaminated from AFFF use decades ago. 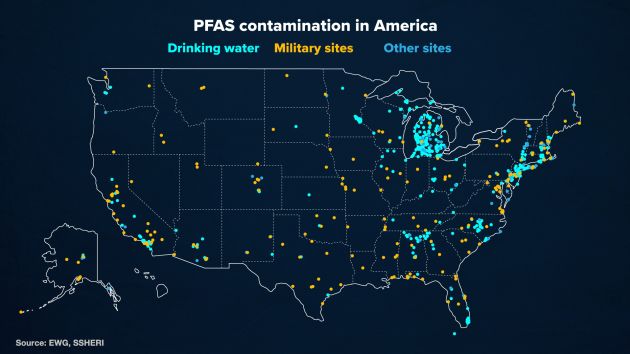 As of July 2019, EWG and Northeastern University have mapped out 712 PFAS contamination sites across 49 states in the U.S.
CNBC | Kyle Walsh

The Centers for Disease Control recognizes an array of health effects linked to PFAS exposure, such as lowering a woman’s chance of getting pregnant, issues with childhood development and even cancer.

Now, communities and service members across the country are wondering what PFAS-contaminated water means for their health and their homes, and who’s responsible to clean it all up. The investigations are a tangled mess of politics and national security. The chemicals in the foam are the subject of corporate lawsuits and scientific discovery. And scientists are concerned about their ongoing threat to human health.

And while there’s a patchwork of regulations across state lines, there’s no legally-enforceable federal drinking water standard when it comes to PFAS.

As of July 2019, the Department of Defense has spent more than $550 million on PFAS investigations and responses including providing bottled water and in-home water filtration systems, according to Heather Babb, DOD Spokeswoman. But DOD has not come up with a plan to actually clean up the PFAS contamination across the country, something the Pentagon roughly estimated could cost $2 billion.

CNBC went to some of the communities near military bases to see how PFAS contamination is playing out today. Watch the video above to hear from impacted citizens, veterans and military officials.