By Divest Philly from the War Machine Coalition, November 16, 2022

Philadelphia — Philly DSA is the newest member of a growing Divest Philly from the War Machine Coalition of over 25 organizations that are calling on the City to divest its pension funds from the nuclear weapons industry. The coalition’s demand is increasingly urgent in today’s world, in light of President Biden’s grim warning last month of the risk of nuclear “armageddon”. In explaining the group’s decision to join the call for divestment, Philly DSA put out the following, stating: “No profit margins justify supporting nuclear warfare.”

Through its asset managers, the Philadelphia Pension Board is investing Philadelphians’ tax dollars in nuclear weapons, propping up an industry that is literally based on profiteering from death and that puts all of humanity at risk. Four of the financial institutions that manage the Pension Board’s assets — Lord Abbett High Yield, Ariel Capital Holdings, Fiera Capital, and Northern Trust — collectively have billions invested in nuclear weapons. Divest Philly from the War Machine is calling on the Pension Board to instruct its asset managers to screen out the top 25 nuclear weapons producers from its holdings.

Northrop Grumman is the biggest single nuclear weapons profiteer, with at least $24 billion in contracts. Raytheon Technologies and Lockheed Martin also hold multi-billion-dollar contracts to produce nuclear weapon systems. These same companies have been profiting the most off of the war in Ukraine, while the world fears armageddon. Lockheed Martin has seen its stocks soar nearly 25 percent since the start of the new year, while Raytheon, General Dynamics, and Northrop Grumman each saw their stock prices rise by around 12 percent.

“With increased international tension, the always-present possibility of rogue actors gaining access to nuclear information, and the false dialogue that we do not have resources for human needs – including managing the effects of climate change – the time to support divestment actions is now. Our decisions about what is important are made evident by where our money is placed. As members of Mayors for Peace, let the City of Brotherly Love and Sisterly Affection show that we choose to invest in a nuclear-free world,” said Tina Shelton of the Greater Philadelphia Branch of the Women’s International League for Peace and Freedom (WILPF).

Not only do Philadelphia’s investments in nuclear weapons threaten our safety, but the thing is, they’re not even good economic sense. Studies show that investments in healthcare, education, and clean energy create more jobs — in many cases, better-paying jobs — than military sector spending. And research indicates that switching to ESG (Environmental Social Governance) funds poses little financial risk. For example, 2020 was a record year for socially and environmentally responsible investing, with ESG funds outperforming traditional equity funds, and experts expect continued growth. In March of last year, the Philadelphia City Council passed Council Member Gilmore Richardson’s resolution #210010 calling on the Pension Board to adopt ESG criteria in its investment policy. Divesting the pension funds from nukes is the next logical step to follow this mandate.

Divestment isn’t financially risky — and, in fact, the Pension Board has already divested from other harmful industries. In 2013, it divested from guns; in 2017, from private prisons; and just this year, it divested from Russia. By divesting from nuclear weapons, Philadelphia will be joining an elite group of forward-thinking cities that have already passed weapons divestment resolutions, including New York City, NY; Burlington, VT; Charlottesville, VA; and San Luis Obispo, CA.

“January 22 will be the second anniversary of the UN Treaty for the Prohibition of Nuclear Weapons (TPNW) entering into force and finally making nuclear weapons illegal,” pointed out Chris Robinson (Germantown), leader of the Philadelphia Green Party’s communication team. “Philadelphia has already lent its support for the TPNW, passing City Council resolution #190841. Now is the time for the City of Brotherly Love to walk the walk by acting consistently with its stated beliefs. Divest now!” 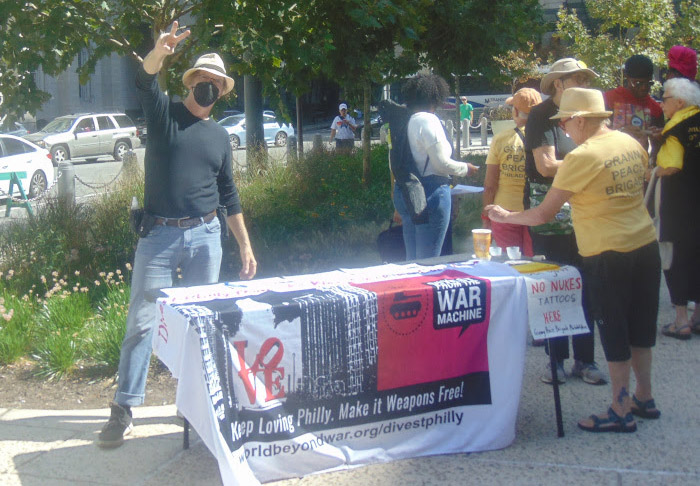