A Fateful Tug of War 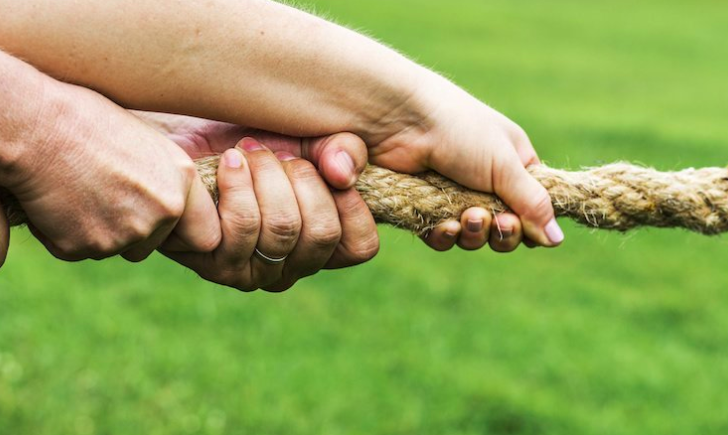 Tug-of-war is an innocent sport and, if there’s no heat wave such as now in the USA and Europe, it can be fun for all the players. But in world politics it may be a dangerous game, especially if played like some old Vikings did – across a fiery pit awaiting the losers.

On the global scale, tug-of-war is currently played with drones and surveillance planes provocatively skirting the borders of Iran in the east and Venezuela in the west, with missile-bearing carriers closely standing by. (Perhaps now in the Far East as well?). Most often, behind them, rubbing their hands – though never soiling them with tug ropes or triggers – is a team of war-hungry politicians and armament kings. The seizure of oil tankers, first by the UK and then, obviously in reprisal, by Iran, makes them hopeful but most decent people fearful! This tug-of-war, however, is not really between countries. It is between that team, itching for confrontation, new bombing missions and new vassals, and all those working for peace. Which side will win out? Or can the thin rope tear?

Germany has long been divided by this test of strength. On one side were those who, ever since Konrad Adenauer launched the Federal German Republic, huddled with war hawks in the Pentagon and NATO strategy rooms. Called “Atlanticists” because of their transoceanic connections, they found a slick advocate in Ursula von der Leyen, since 2014 the Minister of Defense. On July 16th she took a big jump upwards. Her last-day oratory may have done the trick; down-playing her military obsession, she evoked stirring emotions about climate protection, women’s equality, European togetherness and “Western democratic values”. After a painfully narrow secret ballot victory, by just nine votes, 383 to 374, with 23 abstentions, she became president of the European Commission, the powerful cabinet of the European Union, with 28 seats heading 28 departments covering all aspects of European life, one seat to a country (but dropping to 27 if Britain leaves as planned in October). She will become the boss of more than 30,000 employees who can determine life patterns for about 500 million Europeans. It is hard to imagine that she has forgotten her major goal, a strong, German-dominated European army, a muscular junior partner of the US-dominated NATO and aiming in the same eastward direction. A good church-goer might well cry out: “God protect us!”

This meant giving up her job as German defense minister. But her immediate successor, a major surprise, was Annegret Kramp-Karrenbauer, the woman who replaced Angela Merkel as chair of the Christian Democratic Union (CDU). Any hopes for less belligerency were quickly dispersed. AKK, as her long name is shortened (but having zero resemblance with that US name abbreviator, AOC), immediately demanded a further increase in armament spending, up to the multibillion-euro, 2 % budget level demanded of all NATO members. Less martial in appearance than her predecessor, she follows the same line. Gun maker Heckler & Koch (the Mauser offspring), KruppThyssen, super-modern U-boat maker for decades, and Kraus-Maffei-Wegmann, Hitler’s best tank-maker and now exporter of deadly-clanking “Leopards”, could all enjoy untroubled sleep and more billions.

Or could they? The Greens, it is true, now stronger than ever, retain few traces of original pacific traditions and have moved so far in their hatred for Putin and their yen for trouble with Russia that their criticism has not been against an increase in military financing but rather a demand for a “more efficient, less wasteful” build-up.

But the Social Democrats, still in the government coalition and with a record of support for NATO build-ups, were now fighting for survival as a major party. The result: unusually forthright statements like those of Karl Lauterbach, a candidate for party leadership, who warned “against an armament policy conforming to the wishes of Donald Trump”. Some of their delegates voted against von der Leyen, have no love for her successor, AKK, and even echoed the LINKE (Left), who continued to oppose armaments, weapon exports and all military embroilments such as in Afghanistan, Mali, Iraq or Syria.

Last week, at the annual German-Russian discussion forum in Bonn, the “Petersburg Dialogue”, both foreign ministers attended for the first time since the Ukraine crisis. Heiko Maas, a Social Democrat, after meeting with Sergei Lavrov, spoke of positive signals in the Ukraine and hoped that the truce soon to begin there “will also be respected, that there will be a continuing ceasefire and that we will have further progress in implementing the Minsk Agreement” (to end the conflict). Despite all differences, such as with economic sanctions, Maas said that world political solutions are hard to find without “the constructive participation of Russia”. Could this mean a change in tone?

Indeed, varied interests offered glimpses of hope on the “Peace” side in the tug-of-war. Many manufacturers, not so involved with military gear, retained interest in the huge Russian market. So did many in the important fruit and vegetable sector. Both suffered greatly from the sanctions imposed by the USA and the European Union, and tried to get around them. They had no desire to convert roads and rails for eastward-bound tanks and artillery nor to send German battalions with inflammatory missions to maneuvers along Russia’s borders. Many hoped for Russian gas from the Baltic undersea pipeline.

And such tendencies, aside from their motivation, conformed with the thoughts and wishes of very many Germans, most probably a majority, who resisted the “hate-Putin, hate-Russia“ stress in the mass media, which recalled very similar words and caricatures in the media of eighty years earlier.

Much as in the USA, these feelings did not lead to the big peace demonstrations of earlier decades. Main attention and activity was rather turned to environmental questions and opposing fascist threats and violence against people of other colors, clothes or churches. But such issues, also based on internationalism, certainly had their place in the tug-of-war and were close to similar movements in the USA, where the fight against fascism by that courageous young “Squad” of congresswomen has been greatly admired in progressive German circles.

This fight took a dramatic turn on June 2nd when Walter Lübcke, 65, a courageous official in the city of Kassel, a Christian Democrat, was shot dead in front of his home. Four years earlier he had replied angrily to vicious anti-foreigner catcalls in the audience: Whoever did not like the values upon which this country was founded was free to leave it whenever he wanted. The murderer, a dyed-in-the-wool fascist, had been waiting to kill Lübcke ever since, stimulated by fascist blogs, one of them that of a prominent adherent of the Alternative for Germany (AfD).

A huge wave of mourning and anger followed. At a state government session even in conservative Bavaria, all present stood in silent mourning for Lübcke – except one AfD delegate who remained demonstratively in his seat. He has been making excuses ever since.

Widespread rejection of the far right increased substantially. A small local pro-Nazi party in Lübcke’s town, Kassel, called for a rally favoring “justice” for the murderer and announced that 500 would attend. In a giant response by all political parties (except the AfD), the churches, unions and every kind of organization, the city filled up on July 20th. 10,000 anti-fascists were everywhere, many with anti-Nazi T-shirts, flags, banners and noise enough to drown out the downcast-looking neo-Nazis, about 100 of them who, carefully protected by the police, held what they called a meeting and departed in disgrace.

This was a genuine triumph in the tug-of-war. More such triumphs are urgently needed in the next five weeks. The East German states of Saxony and Brandenburg vote on September 1st, Thuringia on October 27th, and up till now the polls give the AfD a strong possibility of winning first place. Broad alliances of three or even four parties may be necessary to form state governments without them.

Thus far any coalition with the AfD has been ruled out by all the others. But some Christian Democrats (CDU) in Saxony, who have headed every government there since German unification, have long been playing an under-the-table game with the AfD best described as “footsie”. The feared far-right gains, resembling those in Hungary, France, Italy and often based on lynch-type mobs such as those in the USA, are truly frightening. And although the AfD, seeking popularity, has publicly advocated detente with Russia, it demands, less publicly, an ever bigger army with ever more modern weapons. To oppose its policy of hatred toward people of color and all those on the left, and its tolerance of violence, thousands from all over Germany are expected in Saxony’s capital Dresden on August 24th to help local groups and warn voters of the threatening dangers. As in so many parts of today’s world, every form of commitment helps. The international tug-of-war demands ever more hands to prevent a fall into a fiery pit of bloody fascism and annihilating war.