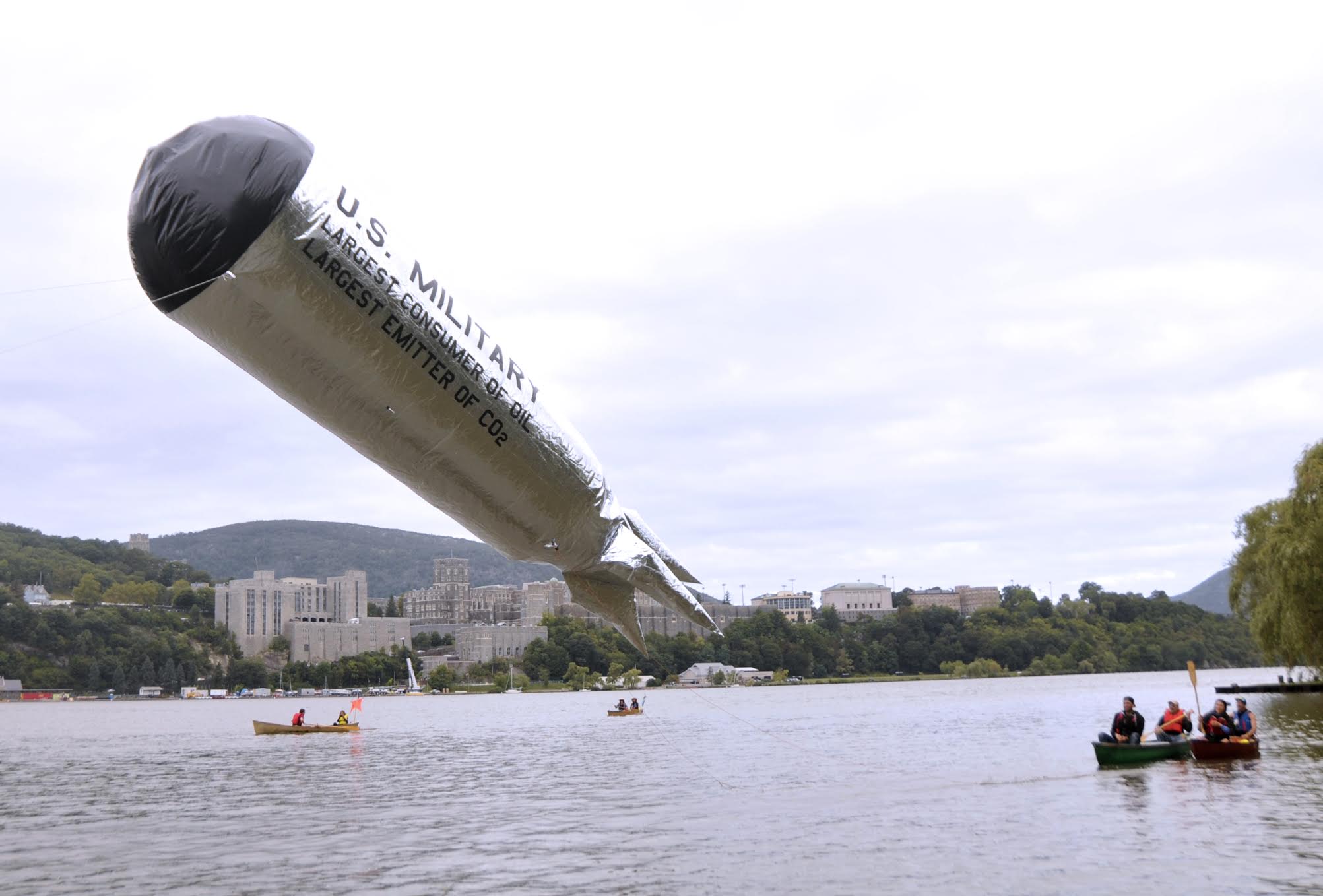 In a remarkable feat of epistemic magic, 500 environmental and peace organizations and nearly 25,000 individuals have endorsed a petition that will be delivered to the COP26 climate conference — a petition proposing a solution that could add dramatically to efforts to protect the Earth’s climate, but a solution that it is impossible for most members of the homo sapiens species to become aware of.

This seems a bizarre claim, but it has been more rigorously tested than a nuclear power plant, a Colin Powell speech, or 96% of election campaign promises. The following images make up a slide show that I have presented in more webinars than I can count — and just about exactly as many as I can stay awake for. In each, a similar discovery is made: nobody previously knew about the problem.

The problem is the exclusion of militaries from climate agreements. I begin by putting this in the context of the many things militaries are excluded from: 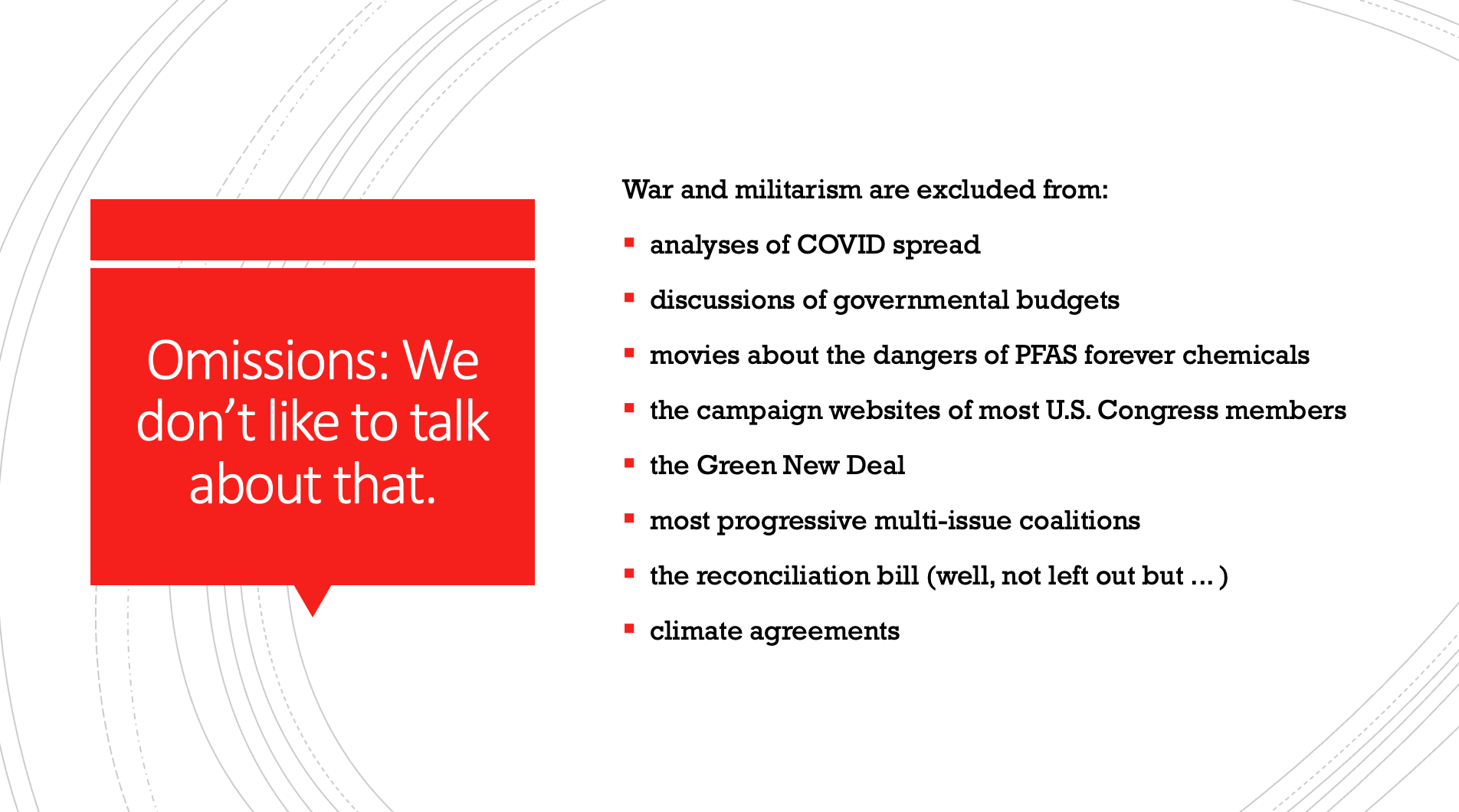 Then I show people the petition: 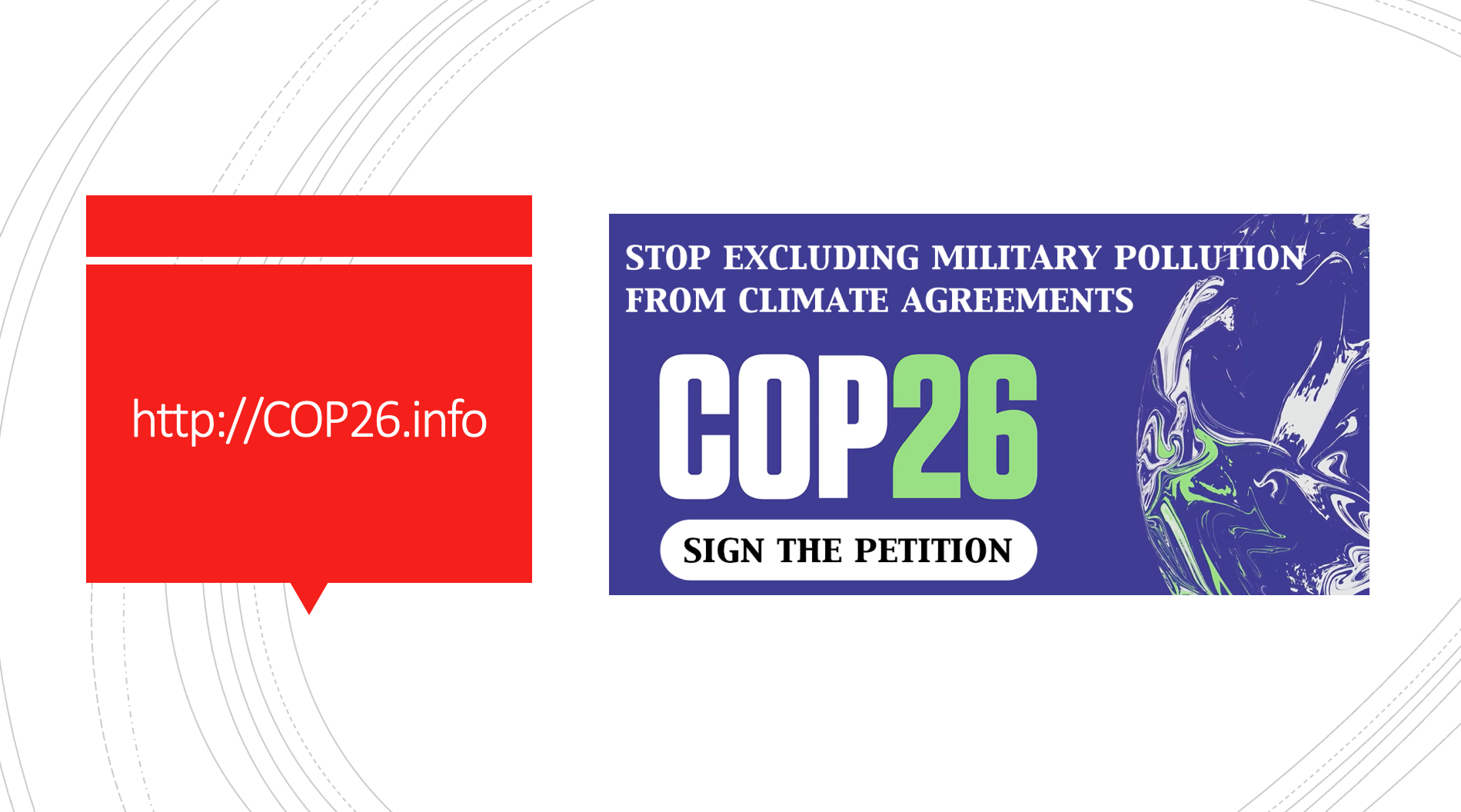 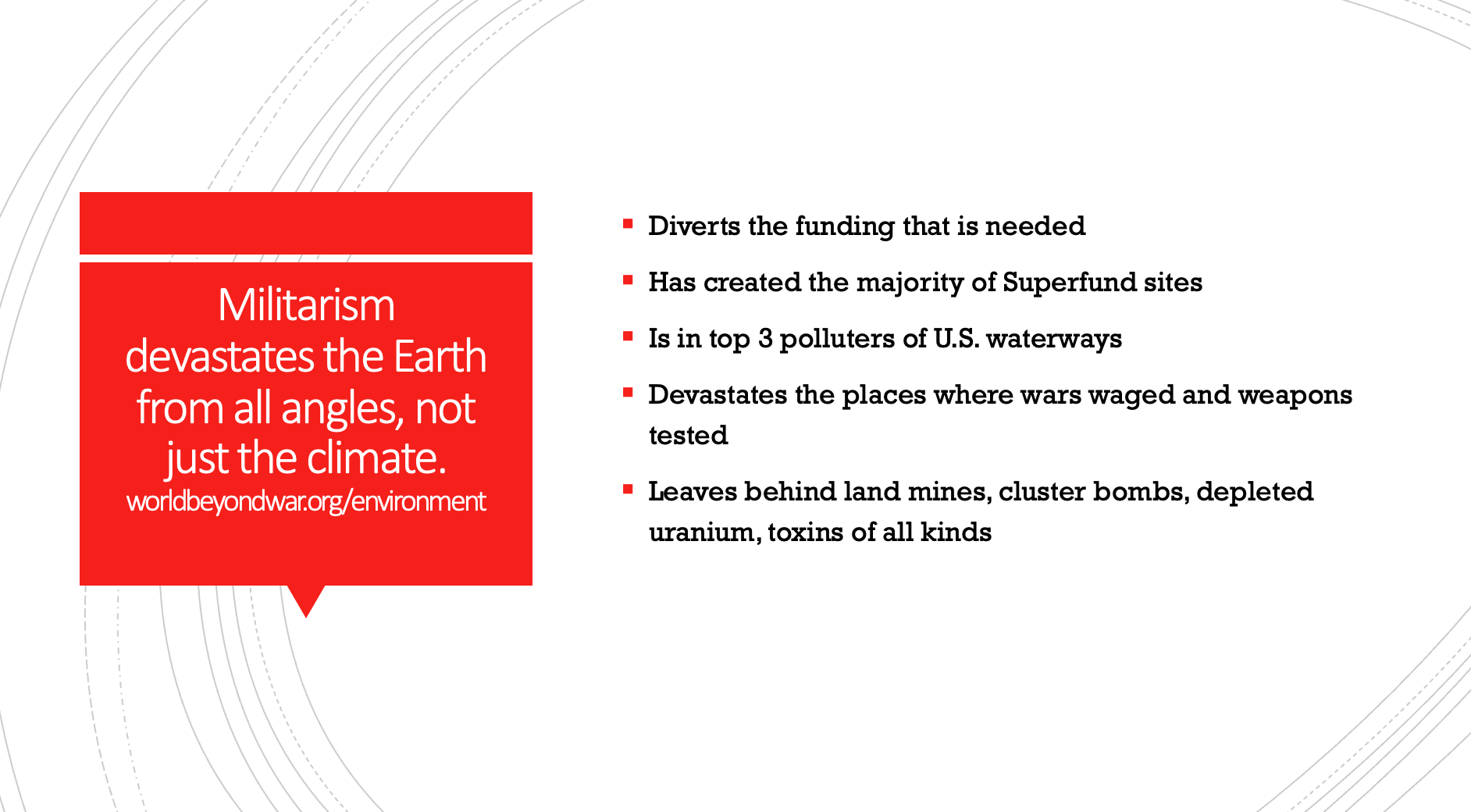 The majority of “Superfund” sites in the U.S. are current or former military- related installations, sites designated by the U.S. Environmental Protection Agency where extreme hazardous waste threatens human health and the environment.

The U.S. military is among the top three largest polluters of U.S. waterways. It dumped 63,335,653 pounds of poison into waterways from 2010-2014, including carcinogenic and radioactive chemicals, rocket fuel, and toxic sewage. 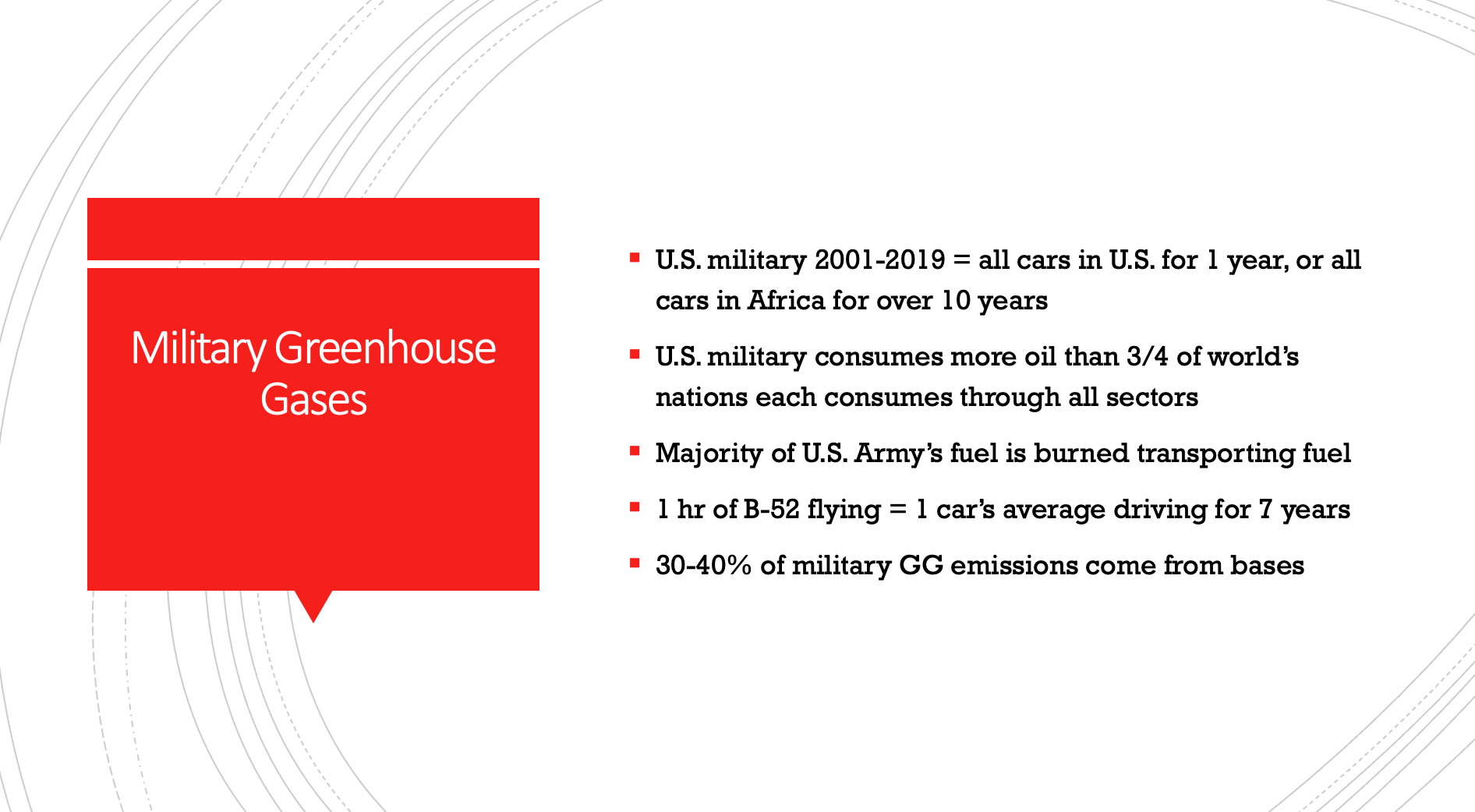 Between 2001 and 2019, the U.S. military emitted 1.2 billion metric tons of greenhouse gases, roughly what all the cars in the U.S. emit in a year.

The U.S. Department of So-Called Defense is the largest institutional consumer of oil ($17B/year) in the world, and the largest global landholder with 800 foreign military bases in 80 countries. The U.S. military consumes more petroleum than a lot of entire nations.

By one estimate, the U.S. military used 1.2 million barrels of oil in Iraq in just one month of 2008. One military estimate in 2003 was that two-thirds of the U.S. Army’s fuel consumption occurred in vehicles that were delivering fuel to the battlefield.

Over three-quarters of the U.S. military’s petroleum consumption is for airplanes and helicopters; over half is by the Air Force. A B-52 bomber airplane flying for 1 hour puts out as much in greenhouse gases as an average car driver does in 7 years.

Some 30 to 40 percent of U.S. military greenhouse gas emissions is related to its bases, of which it has an enormous and disastrous supply. 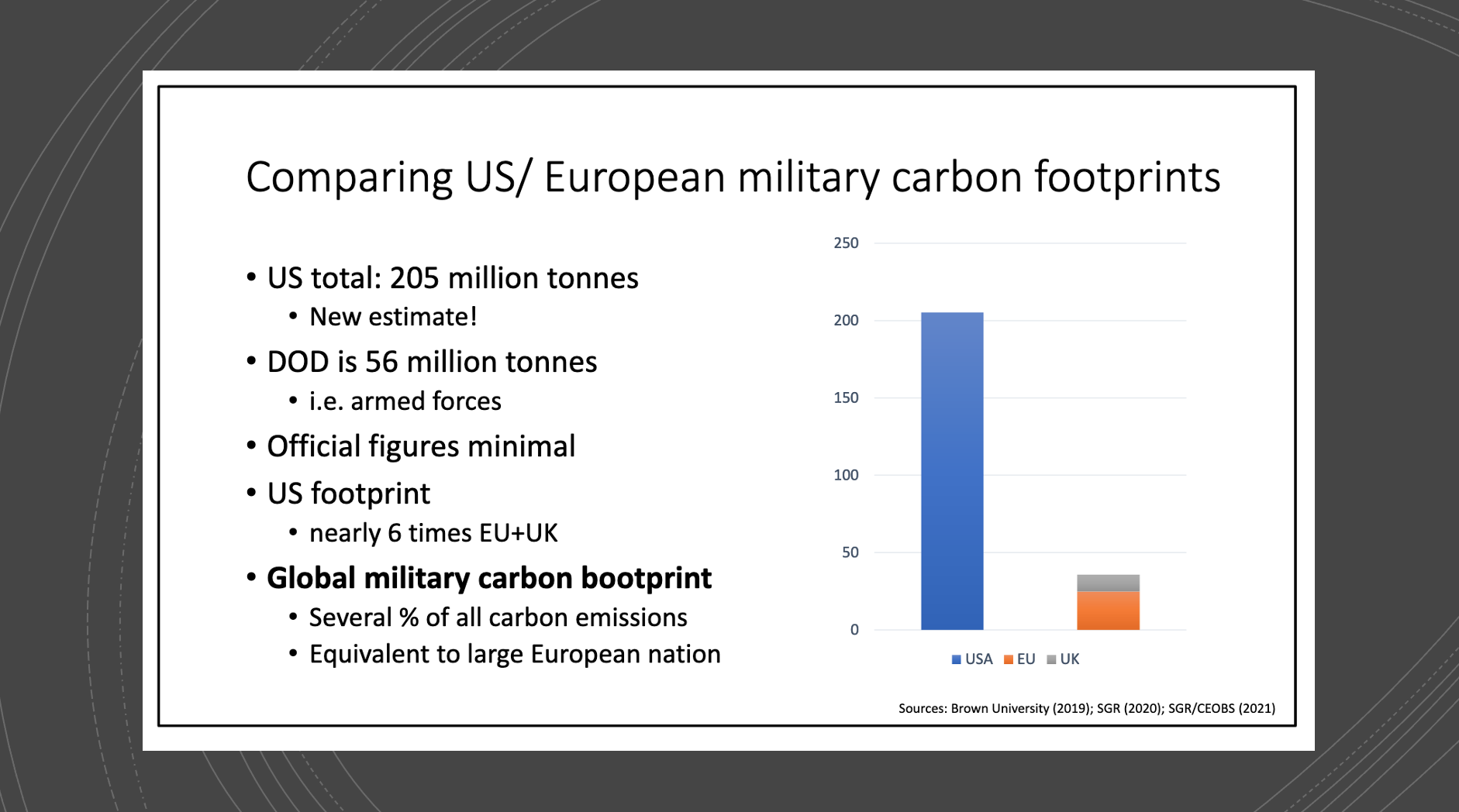 The above image is copied from Stuart Parkinson of Scientists for Global Responsibility. I asked him why governments don’t take up this issue, and he replied that they’re too busy with civilian sectors, an answer that misses the question of why the issue should be separated into those two areas given that we have only one planet. 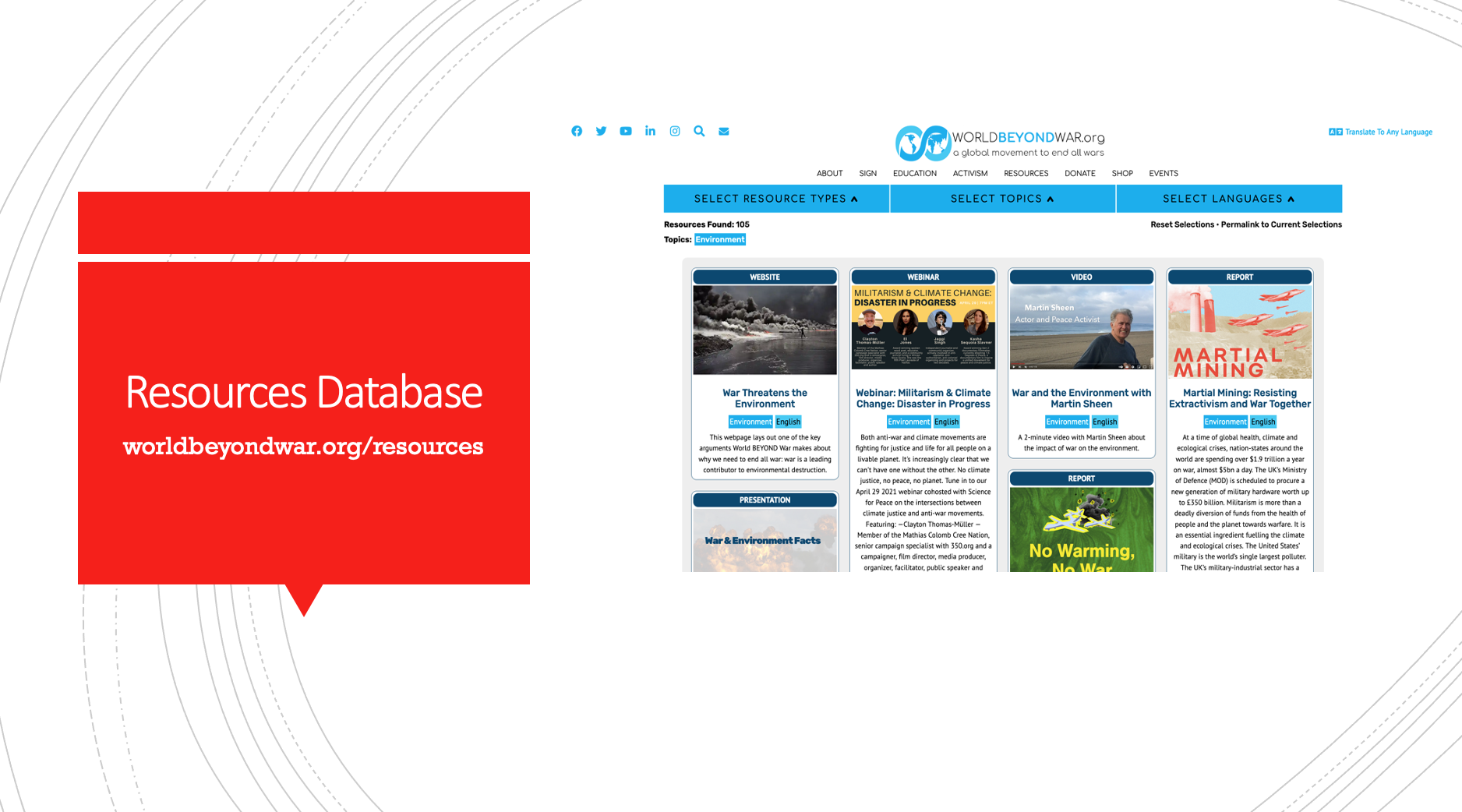 Here’s a database of resources on this and many topics. 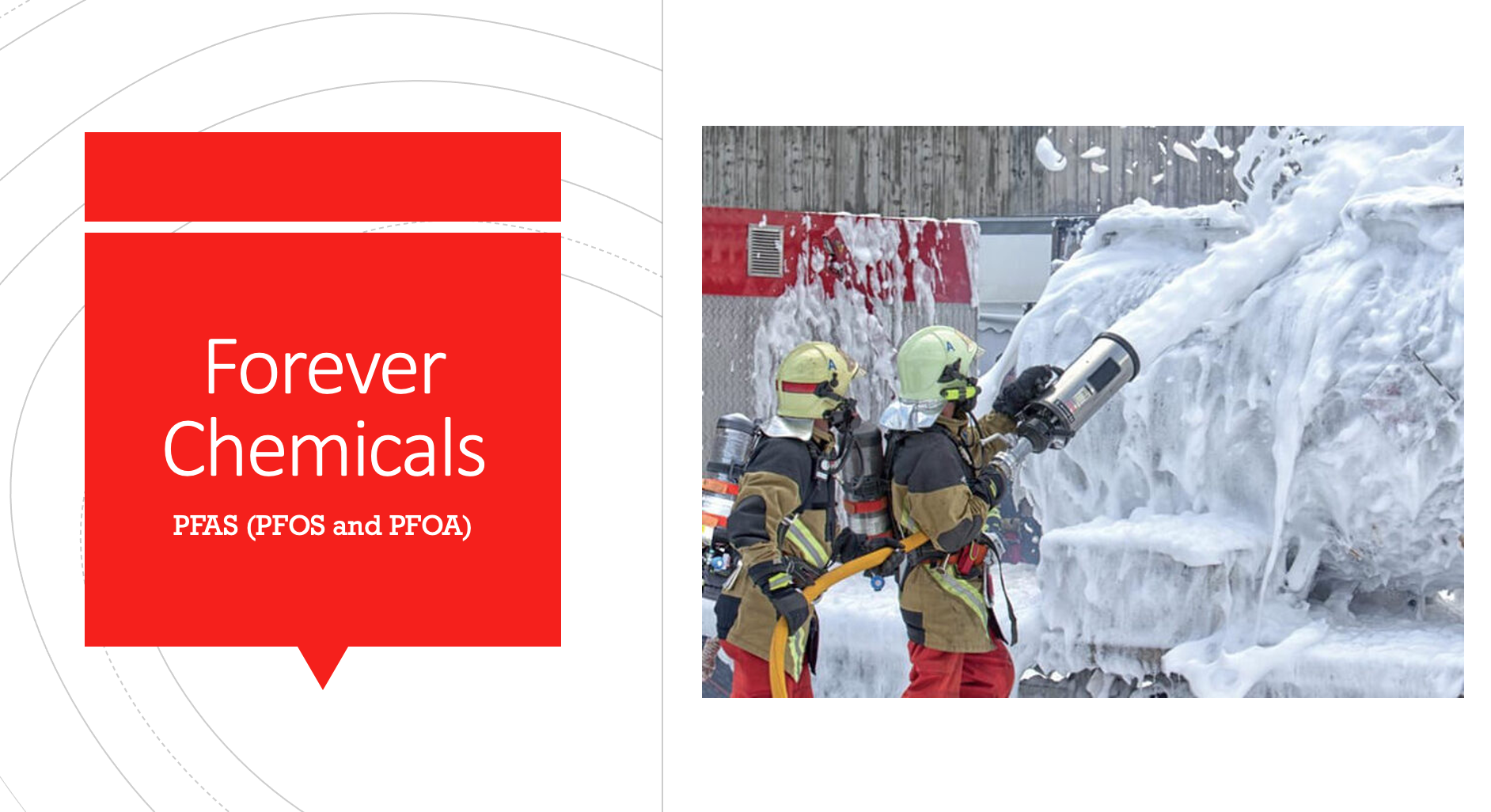 A Pentagon Report released in 2018 details widespread chemical poisoning of water supplies on military bases and in surrounding communities worldwide. The report identifies the presence of PFOS and PFOA chemicals in drinking water at levels known to be harmful to human health and linked to cancer and birth defects. At least 401 bases are known to have contaminated water. PFOA and PFOS chemicals are used in fire retardants during routine fire- training exercises on U.S. military bases worldwide. See: http://MilitaryPoisons.org 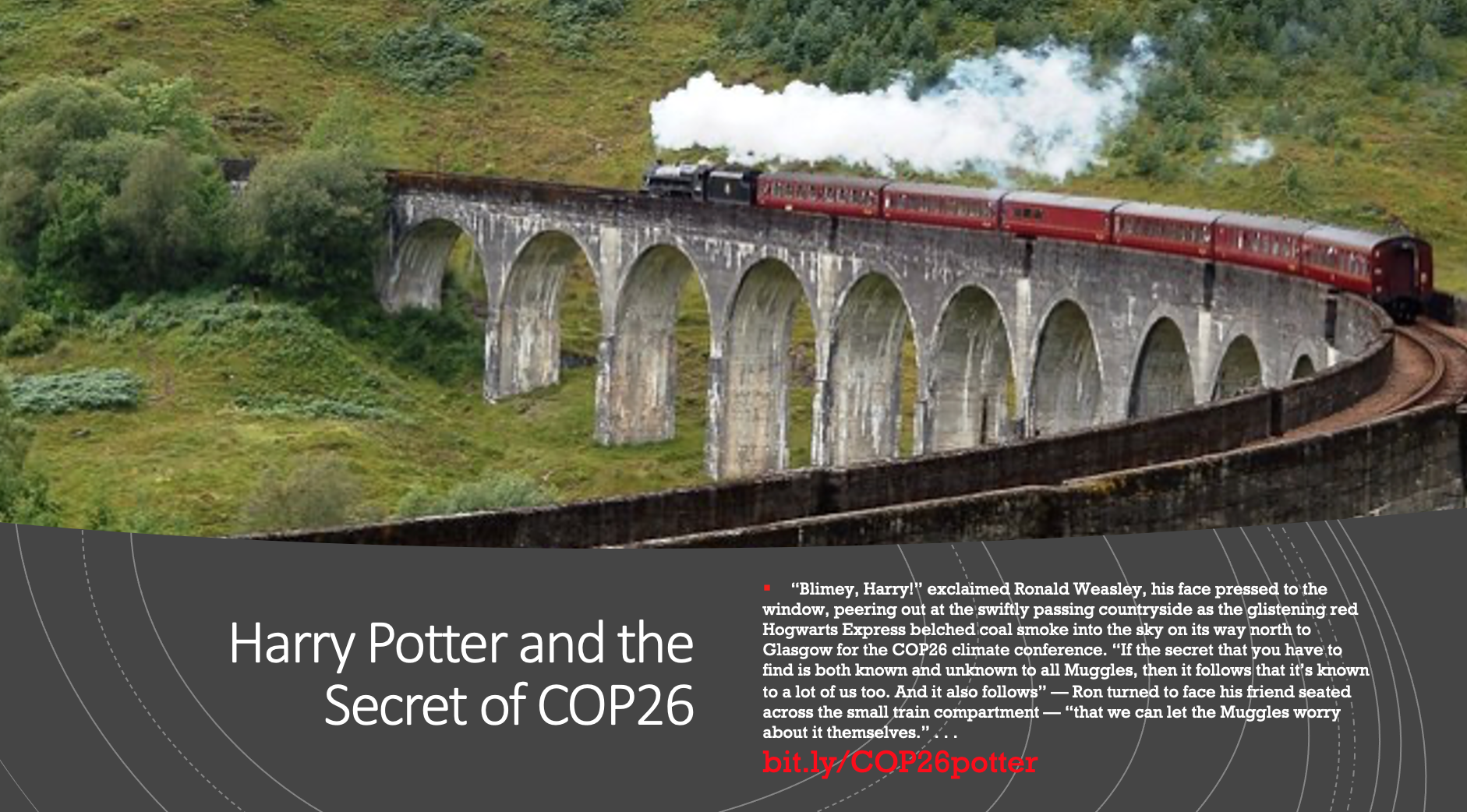 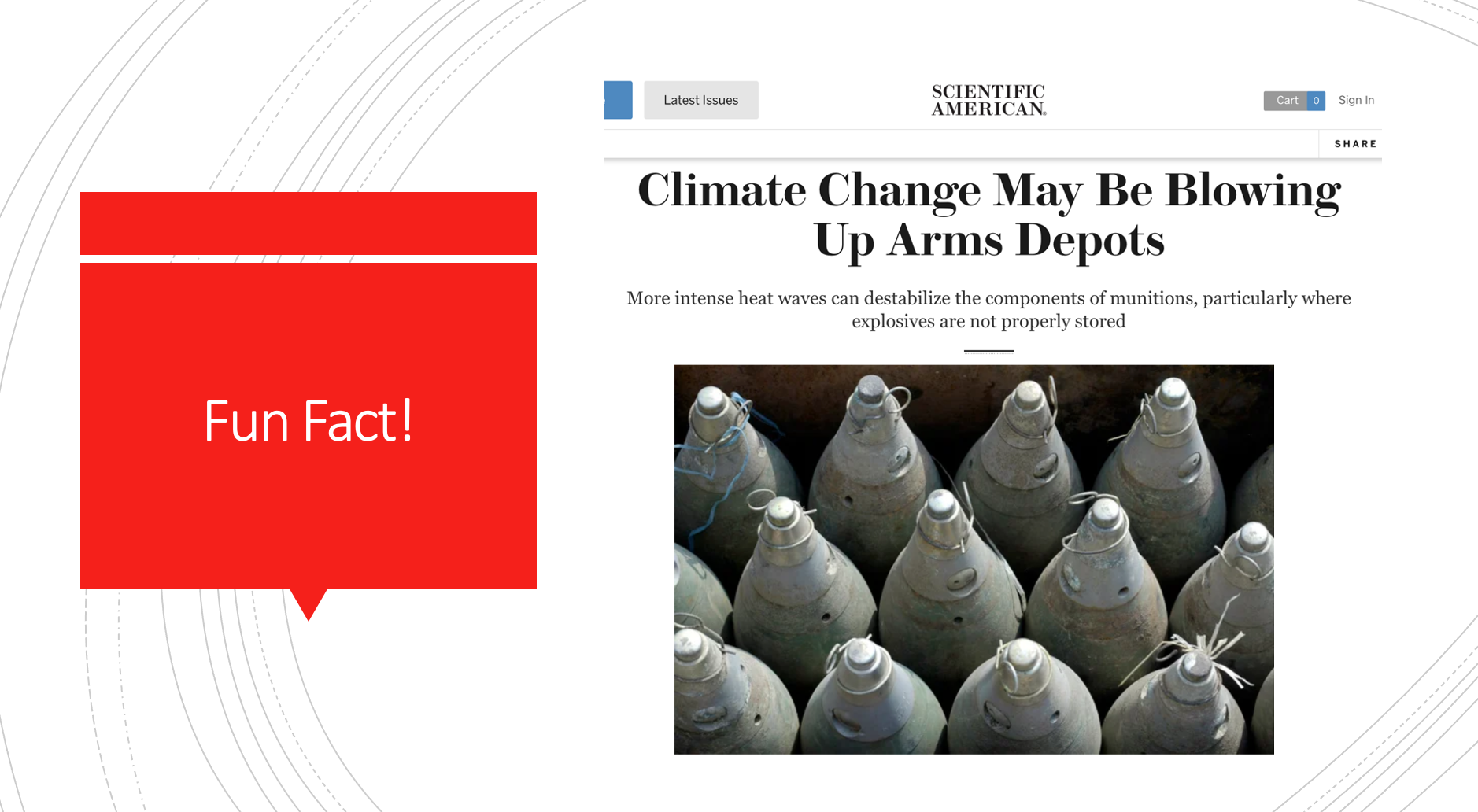 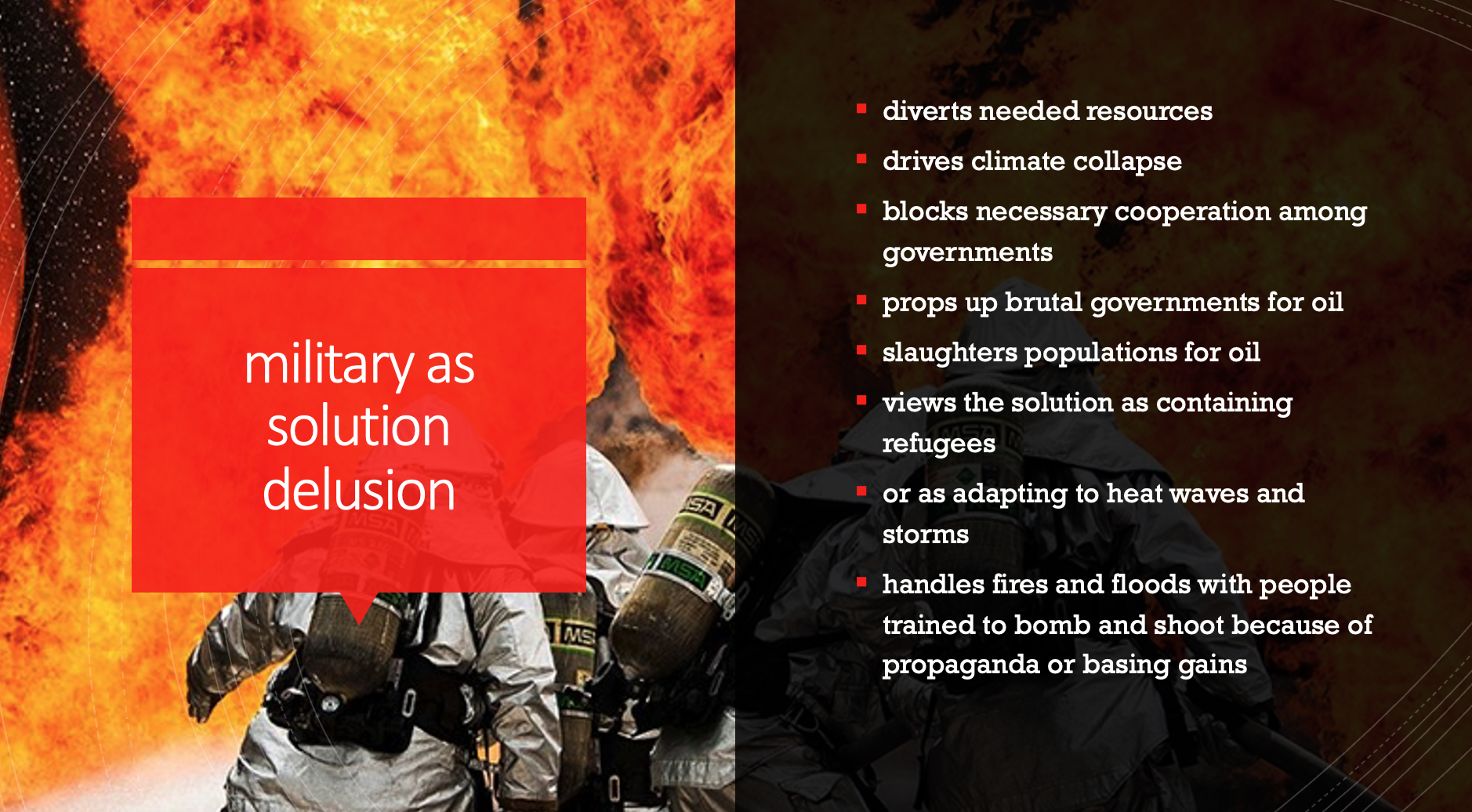 Treating the problem as its solution won’t save us. 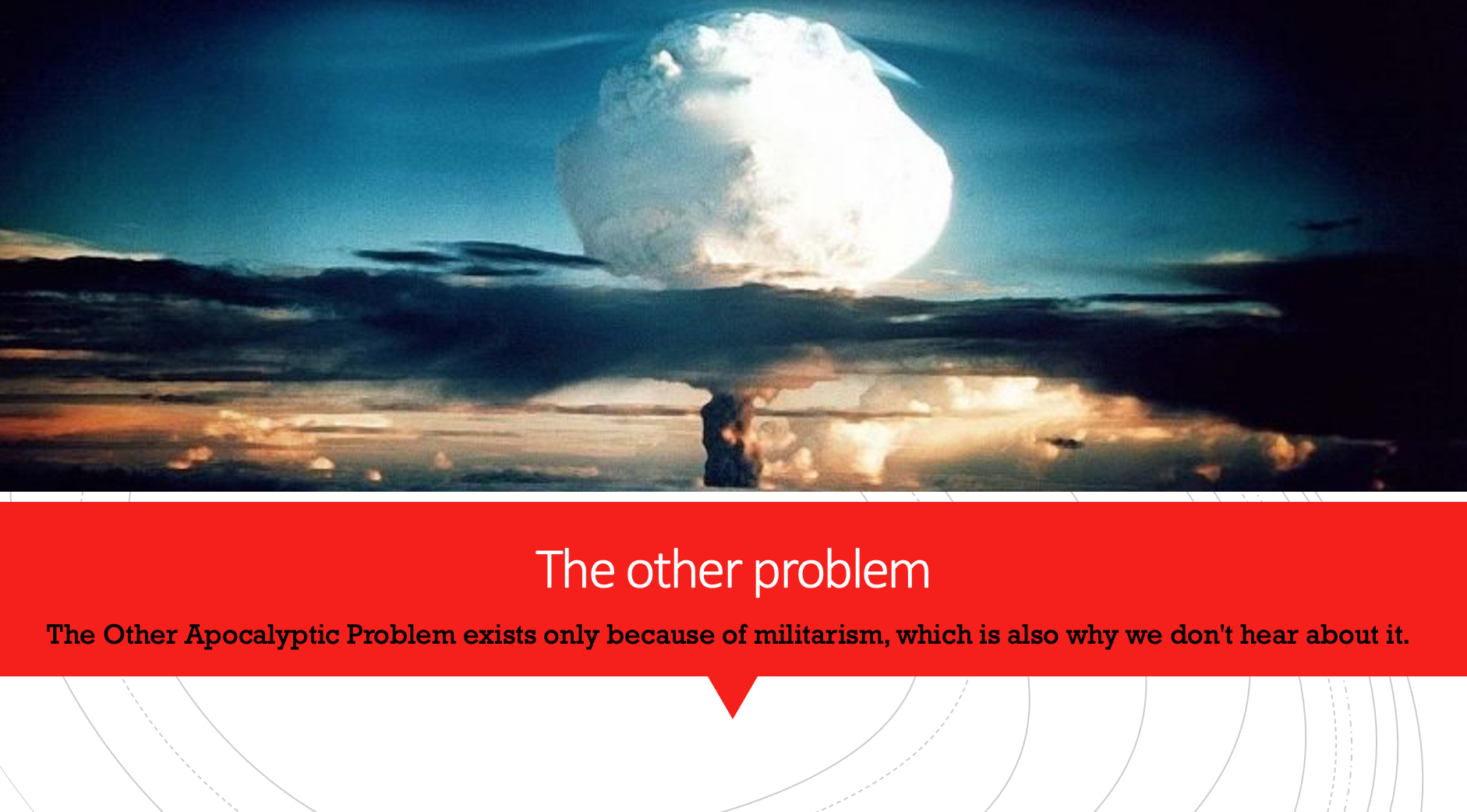 Then there’s the other problem. 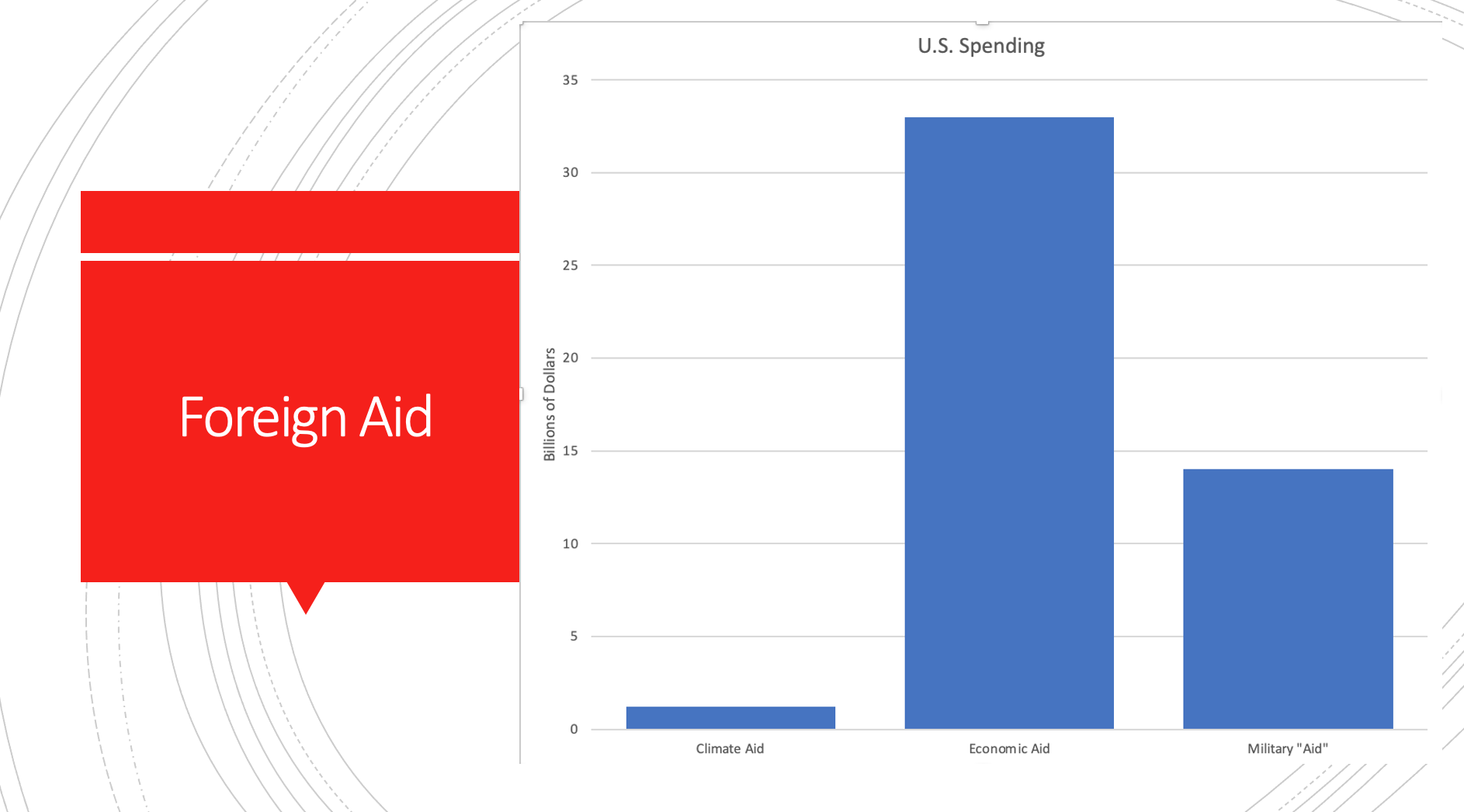 Earlier this year, U.S. President Biden proposed to spend $1.2 billion on climate aid to poor countries. In 2019, according to USAID, the U.S. government handed out $33 billion in economic aid plus $14 billion in so-called military “aid.” Things that are no factor whatsoever in the distribution of this loot include women’s rights and environmental behavior. 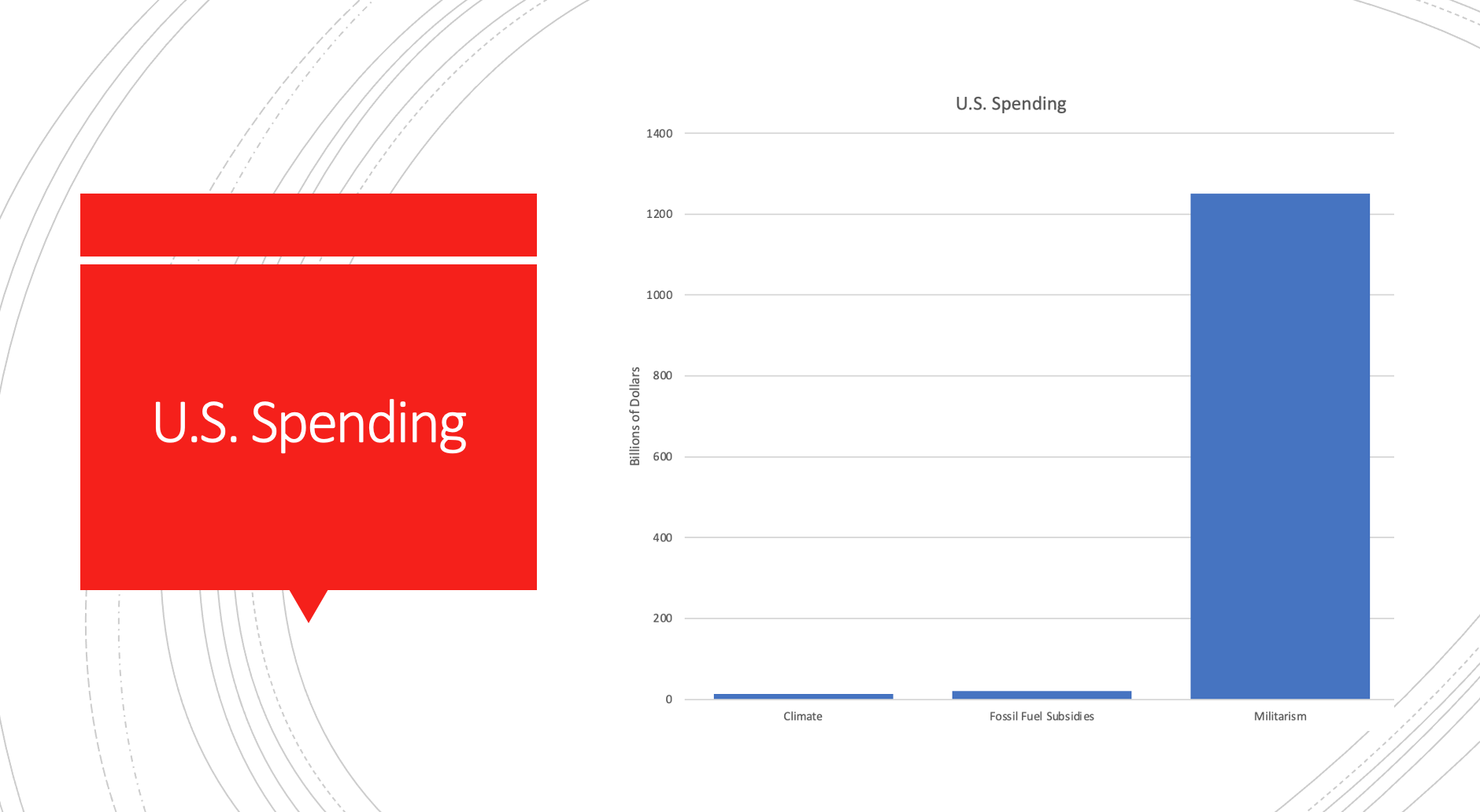 Another comparison you won’t see on your TV is that between the two most gigantic spending bills in the history of forever, the Infrastructure Extravaganza and the Build Back Better Reconciliation Bill, which would spend a combined $450 billion a year (or would have before being hacked away at), as compared to that $1,250 billion a year on militarism. 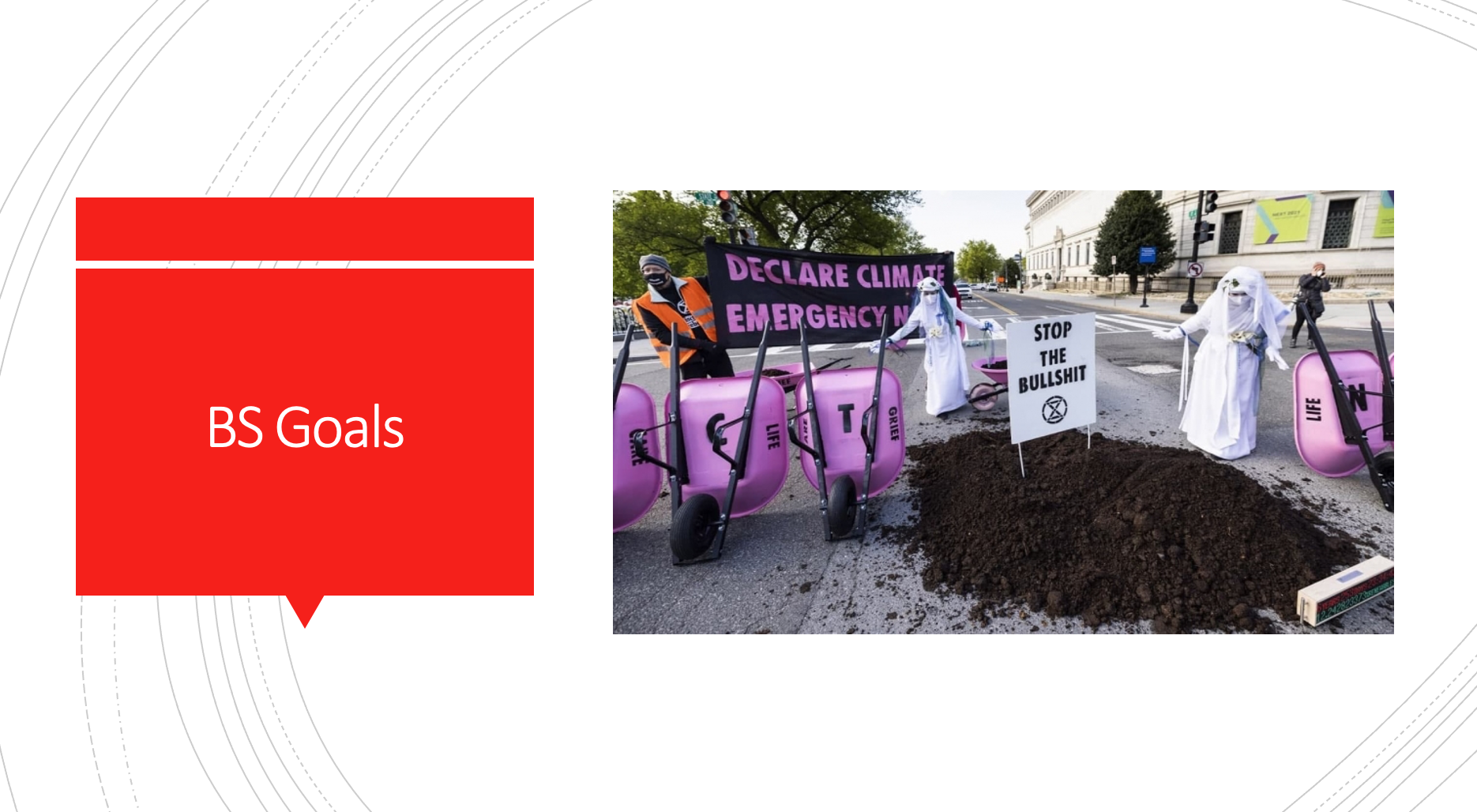 The President also said he wanted to reduce U.S. emissions 50 to 52 percent by the year 2030. That sounds super fantastically better than nothing, right? But the fine print not found in the U.S. media reports includes that he actually means reducing 2005 levels by 50 to 52 percent by 2030. And the totally missing print that environmental activists know from past experience to object to includes such slimy practices as excluding from the calculation any emissions from imported goods or from international shipping and aviation or from the burning of biomass (that’s green!), plus the omission of predictable feedback loops, plus the building into the calculations the benefits of imaginary future pro-climate technologies. And then there are the things that even the environmental activist organizations tend to go silent on. These often include livestock. They almost always include militarism, which is generally excluded from climate agreements and even discussions about climate agreements. 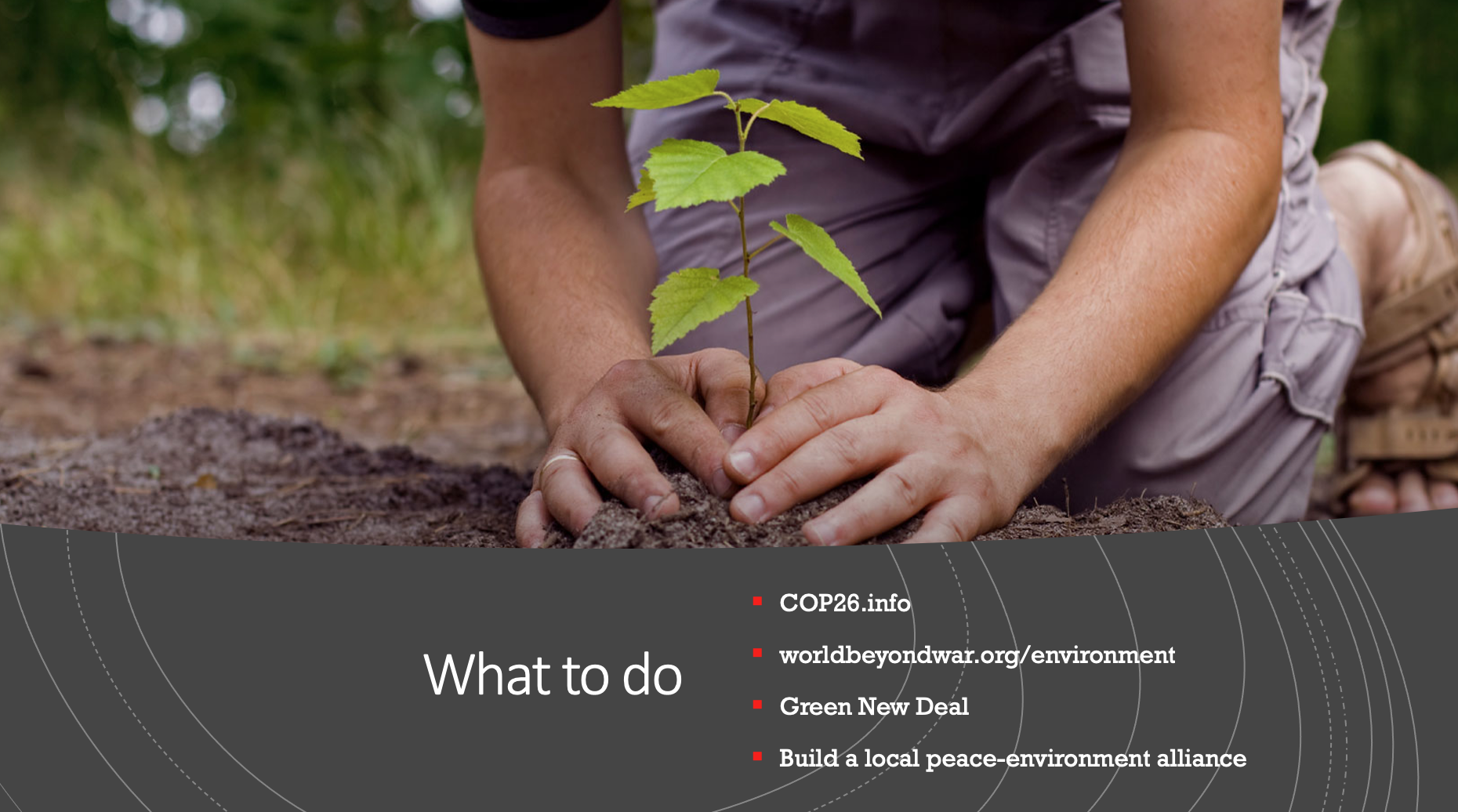 There is plenty we can do, even including telling each other about the problem despite the impossibility of knowing about it.

We can even pass laws to take funding out of both weapons and fossil fuels, educating people about the connections between the two during the process, before all memories are swiftly wiped clean: 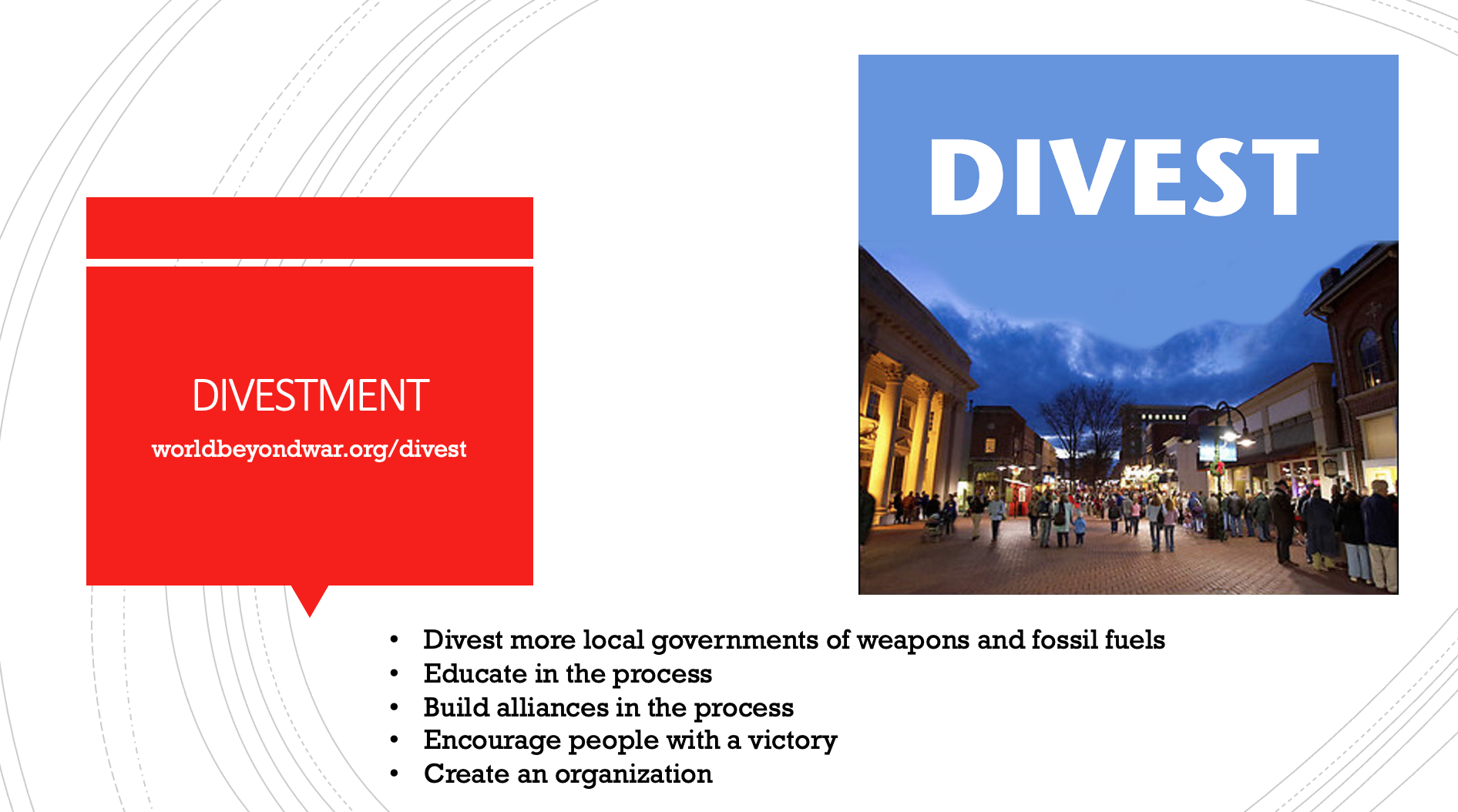