﻿ This Is What’s Really Behind North Korea’s Nuclear Provocations

It’s easy to dismiss Kim Jong-un as a madman. But there’s a long history of US aggression against the North, which we forget at our peril.

By Bruce Cumings, The Nation. 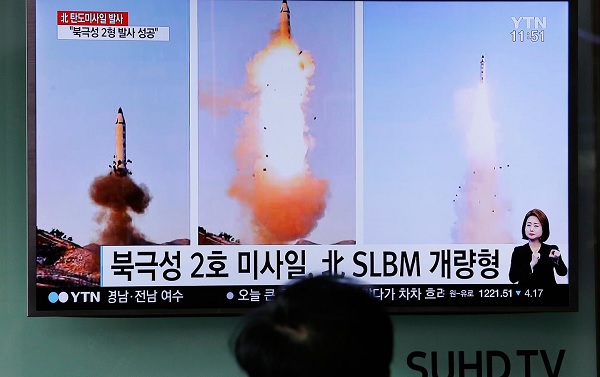 Donald Trump was having dinner at Mar-a-Lago with Japanese Prime Minister Shinzo Abe on February 11 when a message arrived mid-meal, courtesy of Pyongyang: North Korea had just tested a new, solid-fuel, intermediate-range ballistic missile, fired from a mobile—and therefore hard-to-detect—launcher. The president pulled out his 1990s flip-phone and discussed this event in front of the various people sitting within earshot. One of these diners, Richard DeAgazio, was suitably agog at the import of this weighty scene, posting the following comment on his Facebook page: “HOLY MOLY!!! It was fascinating to watch the flurry of activity at dinner when the news came that North Korea had launched a missile in the direction of Japan.”

Actually, this missile was aimed directly at Mar-a-Lago, figuratively speaking. It was a pointed nod to history that no American media outlet grasped: “Prime Minister Shinzo,” as Trump called him, is the grandson of Nobusuke Kishi, a former Japanese prime minister whom Abe reveres. Nobusuke was deemed a “Class A” war criminal by the US occupation authorities after World War II, and he ran munitions manufacturing in Manchuria in the 1930s, when Gen. Hideki Tojo was provost marshal there. Kim Il-sung, whom grandson Kim Jong-un likewise reveres, was fighting the Japanese at the same time and in the same place.

The North wouldn’t have nukes if we’d kept our word in the past.

As I wrote for this magazine in January 2016, the North Koreans must be astonished to discover that US leaders never seem to grasp the import of their history-related provocations. Even more infuriating is Washington’s implacable refusal ever to investigate our 72-year history of conflict with the North; all of our media appear to live in an eternal present, with each new crisis treated as sui generis. Visiting Seoul in March, Secretary of State Rex Tillerson asserted that North Korea has a history of violating one agreement after another; in fact, President Bill Clinton got it to freeze its plutonium production for eight years (1994–2002) and, in October 2000, had indirectly worked out a deal to buy all of its medium- and long-range missiles. Clinton also signed an agreement with Gen. Jo Myong-rok stating that henceforth, neither country would bear “hostile intent” toward the other.

The Bush administration promptly ignored both agreements and set out to destroy the 1994 freeze. Bush’s invasion of Iraq is rightly seen as a world-historical catastrophe, but next in line would be placing North Korea in his “axis of evil” and, in September 2002, announcing his “preemptive” doctrine directed at Iraq and North Korea, among others. The simple fact is that Pyongyang would have no nuclear weapons if Clinton’s agreements had been sustained.

Now comes Donald Trump, blasting into a Beltway milieu where, in recent months, a bipartisan consensus has emerged based on the false assumption that all previous attempts to rein in the North’s nuclear program have failed, so it may be time to use force—to destroy its missiles or topple the regime. Last September, the centrist Council on Foreign Relations issued a report stating that “more assertive military and political actions” should be considered, “including those that directly threaten the existence of the [North Korean] regime.” Tillerson warned of preemptive action on his recent East Asia trip, and a former Obama-administration official, Antony Blinken, wrote in The New York Times that a “priority” for the Trump administration should be working with China and South Korea to “secure the North’s nuclear arsenal” in the event of “regime change.” But North Korea reportedly has some 15,000 underground facilities of a national-security nature. It is insane to imagine the Marines traipsing around the country in such a “search and secure” operation, and yet the Bush and Obama administrations had plans to do just that. Obama also ran a highly secret cyber-war against the North for years, seeking to infect and disrupt its missile program. If North Korea did that to us, it might well be considered an act of war.

On November 8, 2016, nearly 66 million voters for Hillary Clinton received a lesson in Hegel’s “cunning of history.” A bigger lesson awaits Donald Trump, should he attack North Korea. It has the fourth-largest army in the world, as many as 200,000 highly trained special forces, 10,000 artillery pieces in the mountains north of Seoul, mobile missiles that can hit all American military bases in the region (there are hundreds), and nuclear weapons more than twice as powerful as the Hiroshima bomb (according to a new estimate in a highly detailed Times study by David Sanger and William Broad).Last October, I was at a forum in Seoul with Strobe Talbott, a former deputy secretary of state for Bill Clinton. Like everyone else, Talbott averred that North Korea might well be the top security problem for the next president. In my remarks, I mentioned Robert McNamara’s explanation, in Errol Morris’s excellent documentary The Fog of War, for our defeat in Vietnam: We never put ourselves in the shoes of the enemy and attempted to see the world as they did. Talbott then blurted, “It’s a grotesque regime!” There you have it: It’s our number-one problem, but so grotesque that there’s no point trying to understand Pyongyang’s point of view (or even that it might have some valid concerns). North Korea is the only country in the world to have been systematically blackmailed by US nuclear weapons going back to the 1950s, when hundreds of nukes were installed in South Korea. I have written much about this in these pages and in the Bulletin of the Atomic Scientists. Why on earth would Pyongyang not seek a nuclear deterrent? But this crucial background doesn’t enter mainstream American discourse. History doesn’t matter, until it does—when it rears up and smacks you in the face.

Bruce Cumings teaches at the University of Chicago and is the author of The Korean War (Random House, 2010).