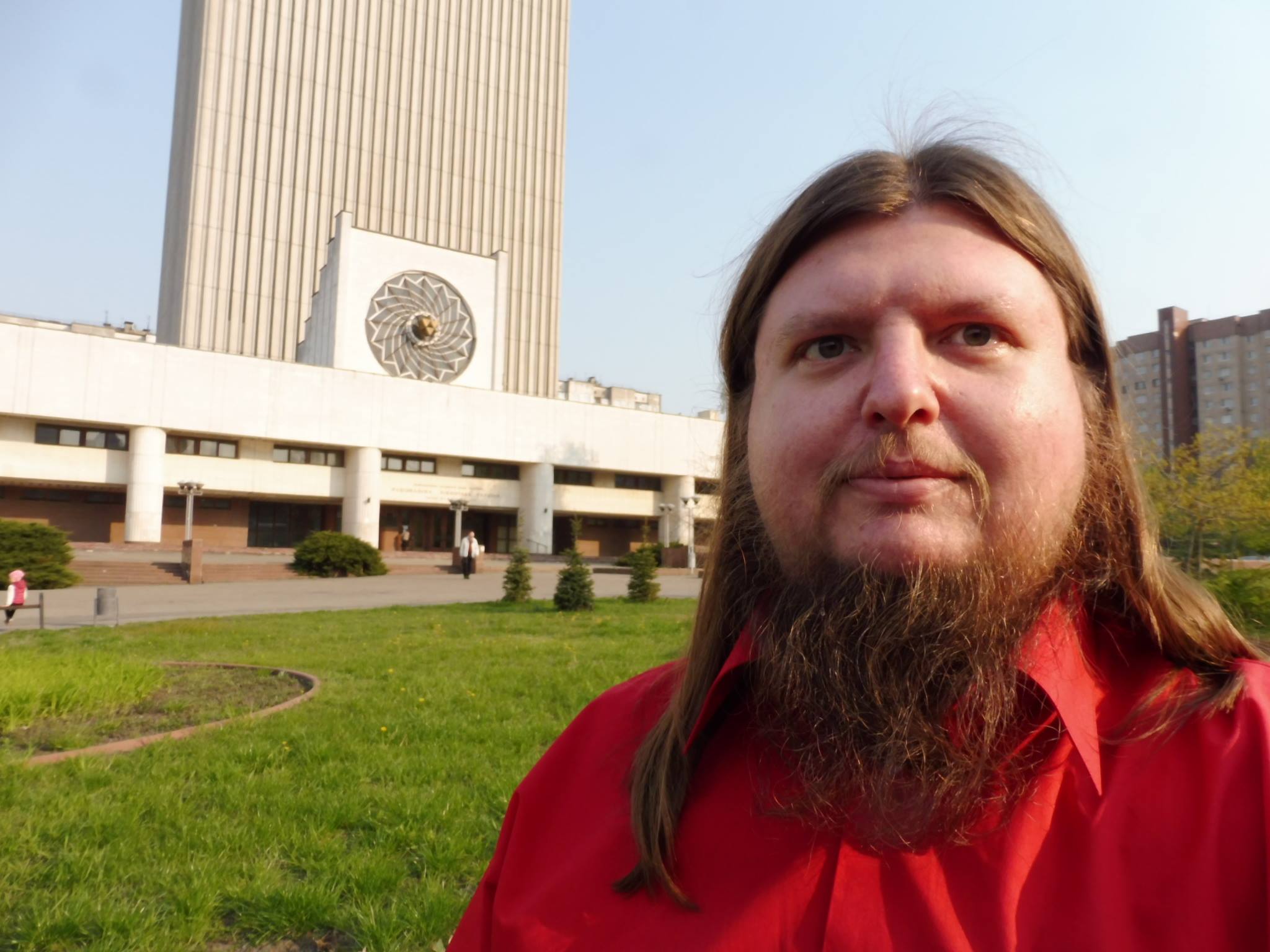 When I was a kid, I liked to read a lot of sci-fi stories. They frequently exposed absurdities of war, like “A Piece of Wood” by Ray Bradbury and “Bill, the Galactic Hero” by Harry Harrison. Some of them described a future of scientific progress in a more peaceful and united world, like Isaac Asimov’s book “I, Robot” showing the power of nonviolent ethics of the Three Laws of Robotics (unlike the movie of the same name), or Kir Bulychev’s “The Last War” telling how a starship with humans and other galactic citizens came to resurrect a dead planet after nuclear apocalypse. In the 90s, in almost every library in Ukraine and Russia you could find an impressive collection of antiwar sci-fi novels entitled “Peace to Earth.” After such lovely reading, I used to reject any apologies of violence and expect a future without wars. It was a big disappointment in my adult life to face the inflating absurdities of militarism everywhere and serious, aggressive promotion of war nonsense.

In 2000, I wrote a letter to President Kuchma calling to abolish the Ukrainian army and received a mocking reply from the Ministry of Defense. I refused to celebrate Victory Day. Instead, I went alone to the central streets of a celebrating city with a banner demanding disarmament. In 2002 I won an essay competition of the Association of Humanists of Ukraine and participated in their protests against NATO. I published some pieces of antiwar fiction and poetry in Ukrainian but realized that many people quickly judge it as naive and unrealistic, being indoctrinated to give up all the best hopes and fight ruthlessly for mere survival. Still, I spread my message; some readers liked it and asked for an autograph or said to me it is a hopeless but right thing to do. In 2014 I sent my short bilingual story “Don’t Make War” to all Ukrainian and Russian MPs and to many libraries, including the Library of Congress. I received many replies thanking me for the gift. But today pro-peace creativity in Ukraine is not well-received; for example, I was banned from the Facebook group “Ukrainian Scientists Worldwide” for sharing my sci-fi story “Objectors.”

In 2015 I supported my friend Ruslan Kotsaba after his arrest for a YouTube video calling to boycott military mobilization to armed conflict in Donbas. Also, I wrote to all Ukrainian MPs a proposal to make alternative non-military service more accessible for conscientious objectors to military service; it was an accurately written draft bill, but nobody agreed to support it. Later, in 2019, writing a blog about scandalous hunting for conscripts on the streets, I met Ihor Skrypnik, administrator of an anti-conscription group on Facebook. I proposed to organize the Ukrainian Pacifist Movement headed by well-known Ukrainian pacifist and prisoner of conscience Ruslan Kotsaba. We registered the NGO, which quickly joined several well-known international networks such as European Bureau for Conscientious Objection (EBCO), International Peace Bureau (IPB), War Resisters’ International (WRI), Eastern European Network for Citizenship Education (ENCE), and recently became affiliated with World BEYOND War (WBW) after David Swanson interviewed me on Talk World Radio and invited me to join the WBW Board.

My organizational and activist work in Ukrainian Pacifist Movement (UPM) is purely volunteer since we are a small organization with no paid positions, officially headquartered in my flat. As UPM’s executive secretary, I maintain documentation and official communication, prepare draft letters and statements, co-administer our Facebook page and Telegram channel, and organize our activities. Our work is focused on a campaign for the abolition of conscription in Ukraine, an anti-war social media campaign, and a peace education project. Responding to the stereotype of nation-building through war, we made a short documentary “Peaceful History of Ukraine.”

Recently I contributed as a volunteer to such activities as: petitioning the Ministry of Defense of Ukraine to stop violating the human right to conscientious objection to military service; protesting at the Turkish embassy in Kyiv in solidarity with persecuted objectors; the worldwide campaign against an ongoing retrial of Ruslan Kotsaba for allegedly treasonous expression of his anti-war views; an exhibition of photos of the Hiroshima and Nagasaki atomic bombing in a public library in Kyiv; and a webinar titled “Peace Wave: Why We Should Prohibit Nuclear Weapons.”

As a volunteer, I perform different duties as a member of both the WBW Board of Directors and the EBCO Board. Apart from participation in decision-making, I helped to prepare the 2019 and 2020 EBCO’s annual reports, “Conscientious Objection in Europe,” and I translated WBW’s Declaration of Peace to Ukrainian. My recent volunteer activities in the international peace network included participation as a speaker in webinars co-organized by the IPB and preparation of articles for VredesMagazine and FriedensForum, magazines of the Dutch and German sections of WRI.

I recommend to discover the full potential of the WBW website, which is amazing. When I visited it for the first time, I was enchanted by a simple and clear rebuttal of myths about just and inevitable war, explanations of why war is immoral and wasteful, and plenty of other short replies to widespread militarist propaganda. Some arguments I used later as talking points. From the events calendar, I learned about the IPB’s webinars on the history and achievements of the peace movement, which were very informative and inspirational. Since I learned about WBW from an intriguing podcast episode “Educating for Peace” during a search for peace podcasts, I downloaded immediately “A Global Security System: An Alternative to War” (AGSS) and it met my expectations. If you have doubts about whether it is realistic to hope and work for peace on Earth, you should read the AGSS, at least in the summary version, or listen to the audiobook. It is comprehensive, very convincing, and a totally pragmatic roadmap for the abolition of war.

There are many inspirations. I refuse to give up my childish dreams of a world free from violence. I see that as a result of my work people are happy to learn something new that gives hope for universal peace and happiness. Participation in the worldwide advocacy for change helps me to transcend boundaries of local status-quo boredom, poverty, and degradation; it gives me the opportunity to feel like a citizen of the world. Also, it is my way to speak up, to be heard and supported, to bring my skills as an activist, publicist, researcher, and educator into service for a good cause. Some inspiration I draw from feeling that I continue the important work of many historical predecessors and from feeling hopeful about the future. For example, I dream of participating in international research projects in the field of peace studies and publishing academic articles in reputable peer-reviewed journals such as the Journal of Peace Research.

In the first days of the pandemic, the UPM called to close military commissariats and abolish conscription for reasons of public health; but conscription was only postponed for a month. Some scheduled offline events went online, which helped to save expenses. Having more time and socializing at online fora, I volunteer more in the international peace network.