A leak of thousands of gallons of fuel from the US Navy’s aging underground storage tanks at Pearl Harbor contaminated drinking water and poisoned and sickened thousands of people, including children, driving 3,500 families from their homes, as reported by The Washington Post, January 10, 2022. The fuel-storage facility sits 100 feet above Oahu’s main freshwater aquifer.

Did Hawaii follow in the footsteps of Vermont’s Governor Phil Scott and foist wrongful actions by the military or the military-industrial complex on civilians while claiming to be powerless?

Hawaii issued strict orders to the US Navy and got compliance

The emergency order listed the specific actions the Navy must take to protect the health and safety of the public and provided a 30-day deadline. Those required actions include draining all the fuel from the underground tanks after first carefully testing to ensure that the draining itself could be safely accomplished.

As reported in the The Hill, “Navy to comply with emergency order on leaking Pearl Harbor fuel tanks,” on January 11, 2022, Rear Admiral Blake Converse, deputy commander of the U.S. Pacific Fleet said, “Yes, we are in receipt of the emergency order issued by the Hawaii Department of Health, and we are taking action because it is a lawful order to comply with.”

Thus, Hawaii at this moment is enjoying the fact that just 6 days ago its state government successfully regulated the US Navy and their underground storage tanks to protect the public health and safety in Pearl Harbor.

The prompt, direct, and forceful action by Hawaii stands in stark contrast to the orders to knowingly and deliberately harm the public health and safety daily issued by Vermont Governor Phil Scott. The Vermont governor continues to order F-35 training in cities in depraved indifference to the grievous harm he causes to children and adults in the flight path.

Harm to civilians was documented by the US Air Force itself

The US Air Force F-35 Environmental Impact Statement (EIS) said that nearly 3000 Vermont households, including some 1,300 children, live in the oval-shaped 115-decibel F-35 noise target zone centered on the runway, which includes large portions of Vermont’s most densely populated cities. The Air Force EIS further said that the intense F-35 noise throughout this noise target zone makes the entire 2,252 acres where 6,663 people live “unsuitable for residential use.” 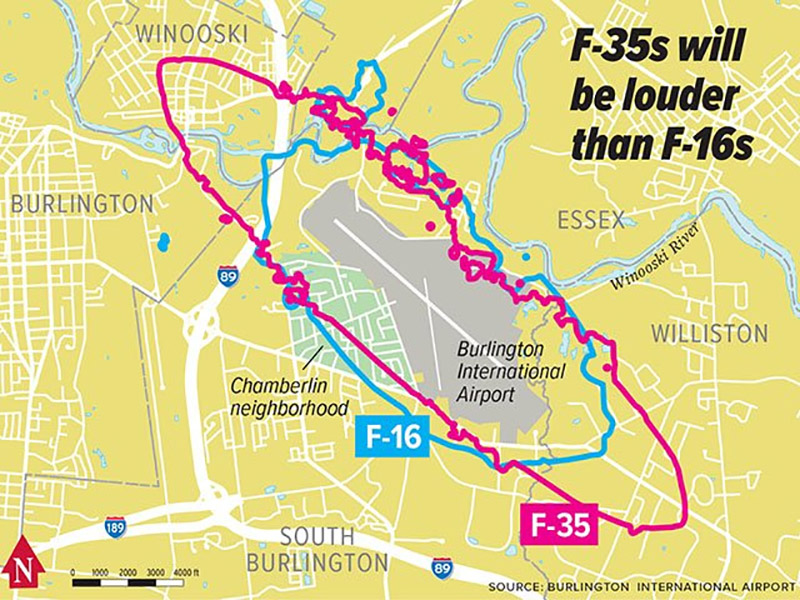 The Air Force EIS further disclosed a “disproportionate impact” on “minority and low income populations.” The F-35 takeoffs and landings at Burlington airport focus the pain and injury from F-35 blasting noise almost exclusively on immigrant, BIPOC, and white working-class Vermonters in Burlington, Winooski, Williston, and the Chamberlin School neighborhood of South Burlington. No wealthy neighborhood is within the F-35 noise-target zone.

Volume II of the Air Force EIS provided scientific studies showing hearing damage from repeated exposure to military jet noise that was not even as loud as the 115-decibel F-35. And studies showing the development of cognitive skills of children were degraded, classes were interrupted, and “tasks involving central processing and language comprehension,” such as “reading, attention, problem solving, and memory,” were impaired by exposure to even the much lower noise level of civilian aircraft at busy commercial airports.

Those admissions by the US Air Force back in 2013 should have been more than enough for the Vermont governor to abort F-35 training in cities well before the jets even arrived in 2019.

The scandalous harm to civilians was confirmed by more than 650 Vermonters who responded to a series of online surveys since March 2020. Their check-box and in-your-own-words statements report pain, injury, distress, and suffering from the ear- and brain-damaging 115-decibel F-35 training flights in Vermont cities.

The mass injury to civilians was further confirmed and amplified by reports on VTDigger here and here, a front-page article in Seven Days, a 12-minute film, “Jetline, Voices from the Flight Path,” by the testimony of 30 residents to the Winooski City Council on September 7, 2021 before three commanders of the Vermont Air National Guard, and by a report on Channel 5.

While often presenting with a mildly pleasant personality, the Governor, as commander-in-chief of the Vermont National Guard took no action at all to protect Vermonters. Illustrating depraved indifference to the suffering, the governor admitted “impact” and “costs” to civilians in a written statement to a reporter for Seven Days in July 2021. But he continued right on ordering the 115-decibel F-35 training in cities to continue.

In a July 14, 2021 email to a reporter for the Burlington Free Press the governor’s spokesman attempted to shift blame for the F-35 training to the federal government:

The Governor is the Commander-in-Chief of the State Guard, and as you know F-35 mission is a federal one, and of course the federal government as primacy when it comes to the military. However, even if it were within the Governor’s power, as he’s said, he fully supports the Vermont Air National Guard’s F-35 mission.

Fortunately for the people of Pearl Harbor, the State of Hawaii took no notice of the feigned obsequious subservience to federal authority and the military demonstrated in this email.

The US constitution gives the President and Congress command of US Navy operations. But a US law expressly provides that federal, state, and local governments can all set standards that underground storage tank owners must meet. Under another section of that federal law the most “stringent” of those standards prevails. On the basis of those federal laws Hawaii was able to enforce the state’s regulations.

The fact that the State of Hawaii not only ordered the Navy to drain its underground fuel storage tanks to protect drinking water, but also that Hawaii made that order stick, is powerful evidence contrary to the Vermont governor’s claim that he is powerless. The Navy’s “mission” for its fuel storage in the Pacific theater did not cancel or deter the proper exercise of regulatory power by Hawaii to protect the public health and safety.

As to training of state national guard units, the command and regulatory roles are reversed. The US constitution and federal law expressly provide the states with the authority to conduct the national guard training but they must do so “according to the discipline prescribed by Congress.”

Congress adopted a law dictating that the discipline, or standards, for the national guard training “shall conform” to the discipline for the US armed forces.

Department of Defense (DoD) discipline includes International Humanitarian Law, also known as the Law of War, which protects civilians. Each one of its principles makes taking off and landing with 115-decibel jets in cities illegal:

(1) As the training with F-35 jets can equally be accomplished from a runway remote from populated areas, and as the city location is, at most, a mere convenience, training in a city with F-35 jets is not a “military necessity,” and must therefore stop now.

(3) Training in a city with F-35 jets turns city dwellers into human shields for the F-35, in violation of both “honor” and “distinction.” Human shielding is a war crime.

(4) The F-35 was designed for stealth supersonic flight, not taking off and landing in cities full of children. Training in a city with F-35 jets needlessly hurts and injures civilians and uses the F-35 in a manner for which it was not designed that causes mass suffering, in violation of “humanity.”

(5) Training in cities with F-35 jets provides zero advantage over training remote from populated areas toward ending a war anywhere in the world, so the injuries to hundreds of Vermonters from the city location cannot be justified as “proportionate.” Because neither the feasible precaution of training remote from populated areas nor the feasible precaution of installing insulation in thousands of homes in advance of the operation has been taken, the training in cities further fails proportionality.

In all other military operations, members of the DoD Components will continue to act consistent with the law of war’s fundamental principles and rules, which include those in Common Article 3 of the 1949 Geneva Conventions and the principles of military necessity, humanity, distinction, proportionality, and honor.

Which means the law-of-war principles must be enforced during training in Vermont.

So, if you were thinking that federal rules prevail, you are, in a way, right. It is the federal constitution and federal law that reserves to the states the authority of training the state national guard. But these same federal provisions also require conformance to DoD law-of-war regulations that prohibit the states from conducting the training in a way that hurts civilians. These provisions and the DoD regulations make the F-35 training in cities illegal and require the governor to order a halt to those F-35 flights in cities.

Especially now, when Hawaii demonstrated how a state can use existing federal laws to take action to protect its citizens from harmful military operations, Vermont authorities must not be allowed to disparage and neglect the federal law and the military discipline that protects civilians. Vermont officials must be required to conform to the law of war discipline and stop hurting and abusing civilians with F-35 training flights in Vermont cities.

Hawaii proved that federally-authorized regulatory power granted to the states was sufficient for the state to order the Navy to drain underground storage tanks leaking fuel into the water supply. Whatever the Navy’s “mission” in the Pacific theater, that mission did not control the outcome.

Vermont is actually in a stronger position than Hawaii because Vermont has command and control authority. No hearing can be required. The governor need only issue the order to halt the illegal F-35 training flights in cities. Further, in five separate ways, the DoD and Air Force regulations require Vermont Guard commanders to conduct the military training operations in a manner that protects civilians. So the main obstacle keeping thousands of Vermont families in harms way is the failure of the Governor and Guard commanders to issue the order to halt the F-35 training in cities.

True, not just the Governor. He has collaborators in the Congressional delegation, the legislative leadership, and in the offices of county, state, and federal prosecutors. All these state leaders actively participate or silently accept the gross violation of human rights. All appear to act with first-loyalty to the war makers and the military-industrial complex. Such corrupted political leaders can never be trusted to do the right thing for Vermonters.

A mass campaign is needed to halt the F-35 training in cities and to protect the health and safety of the public. To remove the law-breakers from public office, and to demand an independent and impartial investigation and prosecution of them. And to restore the kind of dignity and integrity to the state of Vermont that Hawaii is likely now enjoying.

Write or call your public servants:

Vermont National Guard’s Complaint Line: 802-660-5379 (Note: the Vermont Guard told a reporter that it received over 1400 noise complaints. But the Guard won’t release what people said).

See links to the graphs and in-your-own words statements on all four versions of the F-35 Report & Complaint Form since Spring 2020, with a total of 1670 responses from 658 different people.