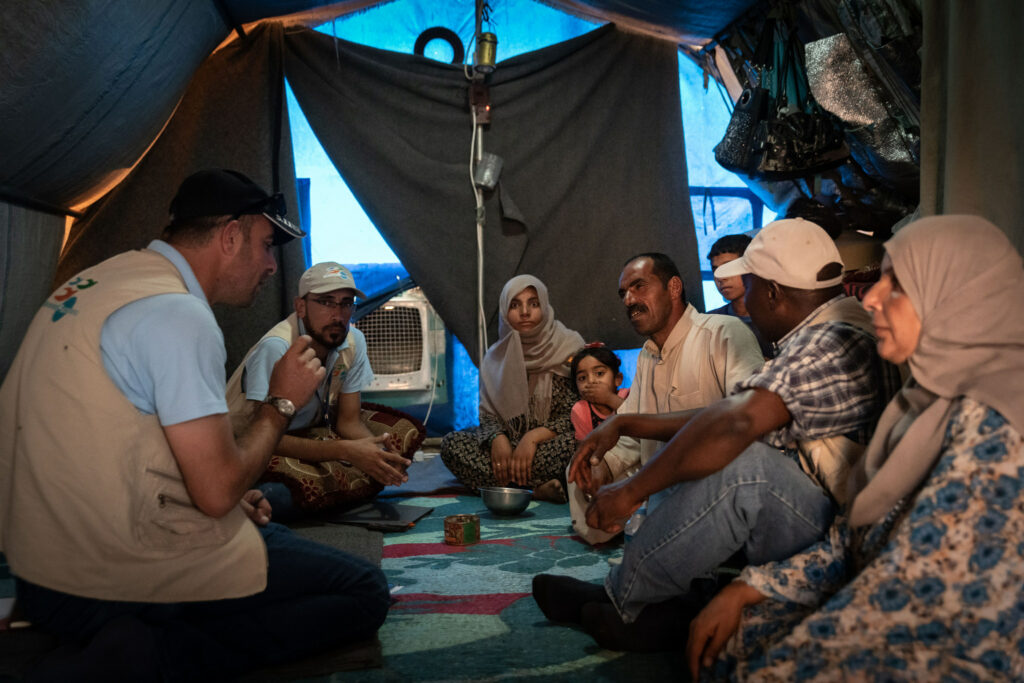 A condensed summary based on a UNITAR/Merrimack College UCP course, “Strengthening Civilian Capacities to Protect Civilians

Replacing armed methods with unarmed ones brings world peace closer. Unarmed civilian protection (UCP) addresses war, terror, and gangs without violence. Though small in scale, awareness is growing. The U.N. now calls UCP an alternative to force. If it grows enough, force may turn obsolete. Force is called a path to peace, but civilians die 9 to 1 in armed actions compared to combatants.

Who practices UCP? Nonviolent Peaceforce, Peace Brigades, Cure Violence, and others operate in 40 nations. Most are paid, and a high percent are women. In UCP missions, a mix of local and international staff enter conflicts on invitation. They live with locals, protect and help locals protect themselves, and build relationships with and among all sides. Once peace structures are self-sustaining, UCPs depart.

The vulnerable include children, who endure death, injury, recruitment as soldiers, sexual violence, abduction, lack of education, lack of healthcare, and denial of other human rights. Many lose parents in conflicts or evacuations. UCPs are well placed to identify children in need, protect them, connect them to services, and reunify their families. UCPs partner with UNICEF, UNHCR, ICRC, and others focused on child protection.

Recent reports count 250,000 child soldiers worldwide, 40% being girls. Girls are often used as “wives,” meaning sex slaves. Many rebel groups, governments, and militias use them. Some child soldiers serve as cooks, porters, spies, or smugglers. In recruitment, some are forced to kill or maim family members. Sex is also exchanged for papers, safe conduct, food, or shelter.

Women make up 80% of the 800,000 people trafficked yearly. Some women are even exchanged in “peace agreements.” Violence to women also damages children, and whole communities. Many women in conflicts are unsure of their rights, or lack the education to navigate legal systems. Such women often find power beyond physical strength. Though usually excluded, their skills are vital to peace processes.

The vulnerable also include displaced persons. Refugees have left their nations due to suffering or threats. Internally displaced persons (IDPs) have left their communities, but remain in their nations. Returnees return to places of origin, willingly or unwillingly. The displaced face dangers of travel, unsafe refugee sites, tensions with host communities, and clashes on returning home. Recent reports show 46% of refugees are under 18.

With UCP, we save humanity without losing our humanity. Many see it as a way to leave cultures of violence for good. UCP recruitment may one day overtake military recruitment, as the world sees the harm of violence even with good intentions. The next sections explain how UCP looks in action.

There are four UCP methods. They go in any order. UCPs use a mix of them in conflicts. Methods may also overlap. Experiences from some 50 groups show they’re effective, if grounded in nonviolence and other principles listed further below.

“Proactive engagement” means being with locals. It includes presence, accompaniment, and interposition.

Presence is when UCPs inhabit public spaces or areas. They use highly visible uniforms and vehicles, so everyone knows they’re there. Presence changes energy on the ground, and raises awareness of UCP on all sides.

Accompaniment is when UCPs accompany trial witnesses, human rights defenders, or others. It may be from hours to months, in one place or on journeys. Accompaniers carry lists of phone numbers or support letters from high officials. Check-in calls are made to update their teams.

Interposition is when UCPs place themselves between armed groups. Well-established contacts with all sides help. UCPs’ courage reminds offenders of their opponents’ humanity, and their own. Interposition’s also effective when offenders’ relatives interpose. Offenders fear they may kill loved ones.

Ceasefire monitoring is when UCPs inspire trust in peace processes. Without it, regular crimes could be mistaken for breaches of ceasefire, and undo peace processes. UCPs are objective observers with wide access at all levels, making it harder for the responsible to deflect blame. UCPs also raise the whole community’s awareness of ceasefires.

Rumor control is when UCPs work with local sources to verify incidents. UCPs rapidly share information with all sides. While authorities present only one side of a story, UCPs verify rumors among local observers for a fuller story. UCPs also visit scenes of incidents for first hand information.

Multitrack dialogue is when UCPs open lines of communication with all sides, especially those who influence offenders. They increase dialogue within and between grassroots, mid levels, and top levels of society. UCPs speak to each side’s interests, respect heirarchies, are transparent, and carefully handle sensitive information.

Confidence building is when UCPs help the vulnerable connect, know their rights, and access support services. It helps civilians trust themselves and systems. For example, UCPs may go with locals to government offices, to ensure services are provided. UCPs teach past examples of civilians protecting themselves, and report local “success stories.”

UCP trainings are workshops on UCP, human rights, and so forth. UCP trainees may be locals already in peace groups, people in power, or representatives of the vulnerable. Locals learn to meet their needs, solve their conflicts, and protect their vulnerable. Workshops include “trainings for trainers.” UCP values local input, and avoids outright dismissal of non-UCP ideas.

UCPs are guided by nonviolence, nonpartisanship, local primacy, transparency, independence, and awareness. When these aren’t followed, UCP may have little effect, or do harm. UCPs work with and around all kinds of people. Everyone has different gifts to offer. UCPs mustn’t act as “saviors,” but cooperate with locals to bring peace without using or excusing violence.

“Nonviolence” means UCPs won’t use violence, carry or use arms, nor accept armed protection. This lets UCPs be the first outsiders in danger zones, and last out. Nonviolence offers everyone dignity. Offering the violent dignity gives them paths back to humanity. UCPs are unarmed by choice, not lack of weapons. One note: UCPs don’t use illegal nonviolence like civil disobedience, to respect home governments’ laws.

“Local primacy” means locals lead UCP activities, and local wisdom’s valued. UCP teams are a blend of local and international staff. For example, a UCP project in Myanmar includes members from Myanmar and other nations. This has many benefits. It makes local groups empowered rather than dependent, and lets peace structures remain after UCP projects finish.

“Transparency” means UCPs broadcast their intentions to all, and don’t lie or deceive. UCPs remain highly visible. They don’t hide or use secrecy, although they guard victims’ confidentiality. A main part of transparency is ensuring all sides know UCPs are there to protect everyone.

“Independence” means UCPs aren’t tied to governments, corporations, political parties, or religious groups. This lets them act where others are mistrusted. Many nations mistrust the U.S. government, for instance. UCPs aren’t seen as entering for oil or business purposes. They’re funded by many sources, refusing funds from those involved in conflicts, or in violent industries.

Since UCPs go where others can’t, they face many dangers. Close relationships and local acceptance go a long way. UCPs keep physical security like barred windows to a minimum. They plan for general and specific threats, have clear roles in incidents, and prepare for siege or relocation. They address threat sources directly, treat all with goodwill, and help sides meet needs peacefully.

UCP groups take steps before entering conflicts. First, they accept invitation. Second, they do conflict analysis. Third, they do needs assessment. Fourth, they make a mission plan. UCP groups may have a headquarters in one nation, and field teams in multiple nations. Communication must flow freely between field and headquarters.

“Invitation” means locals have requested the UCP group’s help. This keeps UCPs from being unwanted interveners. Upon invitation, UCPs begin contacts with multiple levels among government, civil society, and combatants. Unlike armed protectors, UCPs will live among locals, engage many levels of society, and stay for long periods.

“Conflict analysis” is a short report of a conflict’s background. What are the root causes? Who are the groups involved? What do they want? Who’s in power? What are the numbers and key events? UCPs consider culture, religion, history, economy, politics, gender, geography, and demography.

“Needs assessment” occurs next. Given the conflict’s details, who’s most vulnerable? Which UCP methods may work? Who else is trying to help? UCPs consult taxi drivers, caretakers at refugee camps, humanitarian groups, and others locally, and from the capital city. These talks are chances to explain what UCP is and isn’t. For instance, UCP groups don’t give material aid, unlike many international groups.

UCP’s mainly used in isolated areas, where international presence is limited. UCPs must be aware of attempts to manipulate or use them. Corrupt governments may charge unfair costs, limit access to areas, undermine UCP work, or plant false reports. Leaders often deflect blame for violence onto accidents or disobedience. Many use lobbying groups or P.R. firms to say they’re doing everything possible to protect people.

Even UCP presence helps the isolated. Embassies and governments are attuned when their own citizens are in nations. UCPs spread nonviolence, helping people disassociate from armed groups. Offenders realize their needs may be met without violence. They may see no other options, or feel “with blood on our hands, there’s no way back.” Empathy can disarm.

UCPs separate offenders from their acts, and attempt positive contact through support networks. International Human Rights Law says all have rights to equal treatment, life, liberty, security, and freedom of movement. These are from the “Universal Declaration of Human Rights,” adopted by the U.N. in 1948. Many worldwide are unaware of IHRL. UCPs raise all sides’ awareness.

Some organizations that do UCP:

Nonviolent Peaceforce is a global non-profit that protects civilians in violent conflicts through unarmed strategies, builds peace side by side with local communities, and advocates for wider adoption of these approaches to safeguard human lives and dignity.  nonviolentpeaceforce.org

Peace Brigades International is a global NGO that has promoted nonviolence and protected human rights since 1981. PBI believes that lasting transformation of conflicts cannot be imposed from the outside, but must be based upon the capacity and desires of local people.  peacebrigades.org

The United Nations Institute for Training and Research (UNITAR) offers an online course in UCP, called Strengthening Civilian Capacities to Protect Civilians. The course is offered in English through Merrimack College, either for a non-credit certificate or for college credit. merrimack.edu/academics/professional-studies/unarmed-civilian-protection/

Drafted by representatives from all regions of the world, the Universal Declaration of Human Rights was proclaimed by the U.N. General Assembly on 10 December 1948 as a common standard for all peoples and nations. It sets out basic human rights to be universally protected.