Town of Chesapeake Beach Tests Oysters from 23 Miles Away 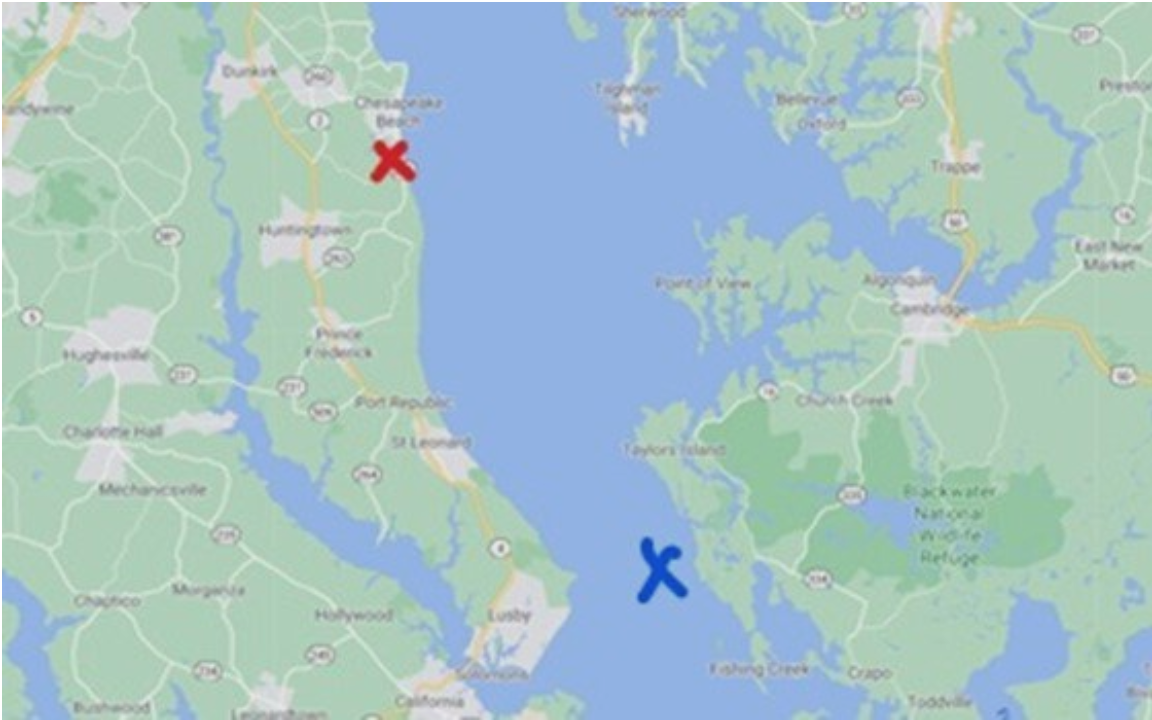 The red X shows the Fire Training Area at the Naval Research Laboratory – Chesapeake Bay Detachment. The blue X is the location of the oyster tested by the Town of Chesapeake Beach.

The Town of Chesapeake released alarming test results on August 10, 2021 for PFAS in oysters, fish, and sewer sludge. The lower than expected 1,060 ppt of PFAS reported in oysters was alarming because the bivalves tested were from a location 23 miles away, in one of the most environmentally pristine areas of the Chesapeake Bay. Meanwhile, a perch caught 1,000 feet from the shores of the Naval Research Laboratory – Chesapeake Bay Detachment (NRL-CBD) was found to contain 9,470 ppt of the poisons, while a rockfish had concentrations of 2,450 ppt. Many states limit PFAS in drinking water to 20 ppt, although Maryland does not regulate the substances.

A small serving of pan-fried perch from the Chesapeake Bay may weigh 4 ounces or 113 grams. If the filet of the fish contains 9,470 parts per trillion of PFAS, that’s 9.47 parts per billion, which is the same as 9.47 nanograms per gram. (ng/g)

The European Food Safety Authority (EFSA) has set a Tolerable Weekly Intake (TWI)  for a child weighing 50 pounds (22.6 kilos) at 100 nanograms per week of four PFAS chemicals, including PFOS.

Four ounces of the perch containing 1,070 ng of PFAS is 10 times greater than the European weekly limit for our child.  The perch is poison. It won’t kill the child, but it is likely to make him sick in the long run.

The Maryland Departments of Health and Environment are not concerned with Marylanders consuming this much poison from such a tiny portion of fish. Women who are pregnant or may become pregnant should not consume perch caught within close proximity of the Naval Research Laboratory – Chesapeake Bay Detachment. It is quickly becoming evident they shouldn’t consume any fish from anywhere in the bay – and neither should anyone else.

Test results released by the Town of Chesapeake Beach also showed the “treated” sewer water regularly released into the bay from the town was found to contain 506.9 ppt of the “forever chemicals”. Perfluoropentanoic Acid (PFPeA), a military/ industrial surfactant accounted for much of the contamination. Chesapeake Beach also receives influent from the Town of North Beach, and a small part of southern Anne Arundel County. All varieties of PFAS are thought to be harmful, while the primary pathway for human ingestion is through eating seafood from contaminated waters.

The Town of Chesapeake Beach released this statement:

“August 10, 2021 (Chesapeake Beach, MD)- The Town of Chesapeake Beach continues to coordinate with the Maryland Department of Environment and the United States Navy regarding mitigation efforts at the Navy Research Laboratory – Chesapeake Bay Detachment.

In May of 2021, the Town announced that the Town’s drinking water has no traces of per-and polyfluoroalkyl substances (PFAS). Tests were conducted on all Town drinking wells, which draw from the Aquia Aquifer.

Although the town says it tested “local aquatic life”, the oyster report prepared by Eurofins Environment Testing America, dated 8/4/21, included GPS coordinates of 3842.084. 7630.601 which point to an area of the bay located 23 miles SSE from Chesapeake Beach, 1 mile from St. John Creek on the Eastern Shore of Maryland, close to Taylor’s Island Wildlife Management Area. The site is approximately 5.5 east of Cove Point Light House and is regarded as one of the most pristine areas of the Chesapeake region. See the Eurofins Oyster Report released by the town.

In an odd twist, the oyster and fish reports prepared by Eurofins were done on behalf of client:

PEER is short for Public Employees for Environmental Responsibility, a leading environmental organization based in Silver Spring, Maryland that defends whistleblowers and shines a light on illegal government actions. Tim Whitehouse, Executive Director of PEER said his agency “was not involved” in commissioning the report.

The Town of Chesapeake Beach says it “continues to coordinate with the Maryland Department of Environment and the United States Navy regarding mitigation efforts at the Navy Research Laboratory – Chesapeake Bay Detachment” and this is very clear.

Sadly, no one is mitigating the chemicals in the environment. Instead, they’re attempting to mitigate public concerns regarding the Navy’s contamination of the Chesapeake Bay. DOD mitigation is a loaded concept. License to poison is gained through compelling, sustained, and effective propaganda.

When high PFAS levels were reported in the waters of St. Inigoes Creek adjacent to the Webster Field Annex of the Patuxent River Naval Air Station in February, 2020, Ira May, who oversees federal site cleanups for the Maryland Department of the Environment, suggested that contamination in the creek, “if it exists”, could have another source. The chemicals are often found in landfills, he noted, as well as in biosolids and at sites where civilian fire departments sprayed foam.

The closest landfill to the persistent use of PFAS-laced firefighting foam on the base is 11 miles away while the closet firehouse is 5 miles away.

Maryland’s top environmental official is covering for the DOD. The Navy subsequently reported 84,756 ppt of PFAS in groundwater at Webster Field, heading toward the creek.

There’s additional evidence of Maryland’s obfuscation regarding PFAS in the Chesapeake’s aquatic life. In September 2020, the Maryland Department of the Environment (MDE) released a report entitled “St. Mary’s River Pilot Study of PFAS Occurrence in Surface Water and Oysters.” (PFAS Pilot Study) that analyzed the levels of per-and poly fluoroalkyl substances (PFAS) in seawater and oysters. Specifically, the PFAS Pilot Study concluded that although PFAS is present in tidal waters of the St. Mary’s River, the concentrations are “significantly below risk based recreational use screening criteria and oyster consumption site-specific screening criteria.”

While the report makes these broad conclusions, the analytical methods and basis for the screening criteria used by MDE are questionable, resulting in a misleading of the public, and providing a deceptive and false sense of safety.

The MDE’s conclusion over-reaches the reasonable findings based on the actual data collected and falls short of acceptable scientific and industry standards on several fronts. The PFAS Pilot Study tested and reported on the presence of PFAS in oyster tissue. The analysis was performed by Alpha Analytical Laboratory of Mansfield, Massachusetts.

The tests performed by Alpha Analytical Laboratory had a detection limit for oysters at one microgram per kilogram (1 µg/kg) which is equivalent to 1 part per billion, or 1,000 parts per trillion. (ppt.)  Consequently, as each PFAS compound is detected individually, the analytical method employed was unable to detect any one PFAS present at an amount of less than 1,000 parts per trillion.  The presence of PFAS is additive; thus, the amounts of each compound are added to arrive at the total PFAS present in a sample. Concentrations may exceed several thousands of parts per trillion of the toxins in an oyster while the state reports “No Detect”.

The MDE is covering for the Navy while the Town of Chesapeake Beach doesn’t have a prayer even if it decided to be an honest player.

Below are the findings from the oyster and fish studies, followed by a PFAS analysis by Pace Analytical of the effluent water from the Chesapeake Beach Water Reclamation Treatment Plant, (WRTP). Effluent water is emptied into the bay after it is treated. PFAS chemicals are not removed from the effluent in the treatment process.

J – concentration is an approximate value;  B – compound was found in the blank and sample.

In May 2021, the Navy announced that the NRL-CBD site had PFAS levels in the subsurface soil exceeding 8 million parts per trillion, perhaps the highest levels anywhere on earth. The volume of contamination likely assures continued contamination of the region for thousands of years. A creek leaving the base were found to have 5,464 ppt of the poisons while groundwater was detected at concentrations of 171,000 ppt.  The contamination of the soil, surface water, and groundwater were almost entirely from PFOS, arguably the most deadly variety of PFAS. The Wisconsin Department of the Environment says human health is endangered when surface water exceeds 2 ppt of PFOS, due to the bioaccumulative nature of PFOS in fish. Many states limit groundwater levels to 20 ppt, although not Maryland.