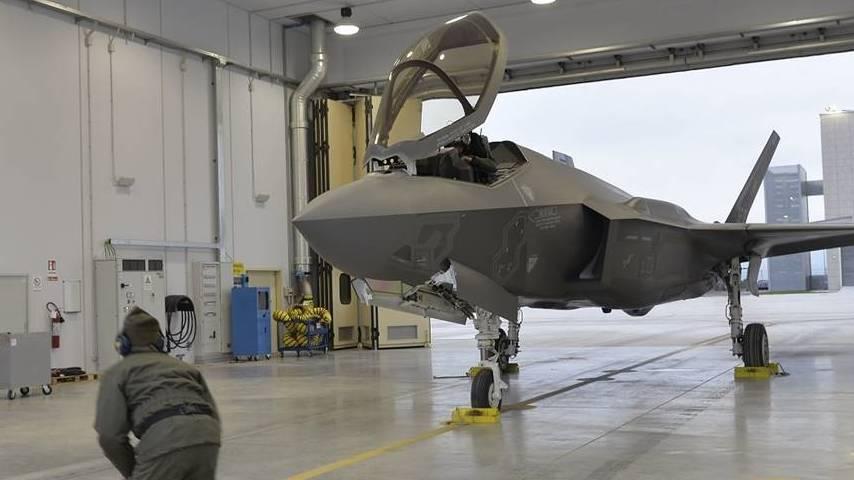 At the military airport of Ghedi (Brescia), there are works in progress to build the main operational base of the Italian Air Force F-35A fighters armed with nuclear bombs. The joint-stock Company Matarrese of Bari, who was the contract winner with an offer of 91 million euros, will build a large hangar (6000 m2) for the maintenance of fighters, and a building that will house the command and flight simulators, equipped with perfect thermal and acoustic insulation “in order to avoid revelations of conversations.”

Two runways will be built with 15 small hangars each, where fighters ready for take-off will be hosted. This confirms what we published three years ago (the manifesto, November 28, 2017), that this is the project (launched by former Minister of Defense Ms. Pinotti) provided for the deployment of at least 30 F-35A fighters.

The area where the F-35s will be deployed is fenced and monitored and will be separated from the rest of the airport, and declared top secret. The reason is clear: alongside the new fighters, the new US B61-12 nuclear bombs will be located in Ghedi, in a secret depot because it is not included in the contract with the Italian Government.

Like the current B-61s arming the Tornados PA-200 of the 6th Air Fleet, the B61-12 will be controlled by the special US unit (704th US Air Force Munitions Support Squadron), “responsible for receiving, storing and maintaining keeping the weapons of the US war reserve destined for the 6th NATO Air Fleet of the Italian Air Force.” The same unit of the US Air Force has the task of “directly supporting the attack mission” of the 6th Air Fleet.

In the Luke (Arizona) and Eglin (Florida) airbases, Italian pilots have already been trained to use the F-35A also for nuclear attack missions under the US command.

Fighters of the same type, armed or in any case possibly armed with the B61-12, are located in the Amendola base (Foggia), where they have already exceeded 5000 flight hours. In addition to these fighters, there will be the U.S. Air Force F-35s deployed in Aviano with B61-12 nuclear bombs.

The new F-35A fighter and the new B61-12 nuclear bomb constitute an integrated weapon system: the use of the aircraft involving the use of the bomb. Defense Minister Guerini (Democratic party) confirmed that Italy remains committed to purchasing 90 F-35 fighters, 60 of which are model A nuclear-capable fighters.

Italian participation in the F-35 program strengthens Italy’s anchoring to the United States, as a second-level partner. The Italian war industry, headed by Leonardo that manages the F-35 plant in Cameri (Novara), is even more integrated into the gigantic US military-industrial complex headed by Lockheed Martin, the largest war industry in the world producing the F-35 fighter.

At the same time, Italy – a non-nuclear State adhering to the Non-Proliferation Treaty – which prohibits countries from having nuclear weapons on their territory – performs the increasingly dangerous advanced basic function of the US / NATO nuclear strategy against Russia and other countries.

Since each aircraft can carry two B61-12 in its internal bay, only Ghedi’s thirty F-35As will have a capacity of at least 60 nuclear bombs. According to the Federation of American Scientists, the new “tactical” bomb B61-12 for  F-35 fighters, being more precise and closer to its objectives, “will have the same military capacity of the strategic bombs deployed in the United States”, the US will deploy them in Italy and other European countries beginning in 2022.

Finally, there is still the undefined question of costs. The United States Congress Research Service, in May 2020, estimated the average price of 108 million dollars for a F-35 fighter, specifying however that it is “the price of the plane without an engine,” the engine cost is about 22 million. Once you have bought an F-35, even at a lower price as Lockheed Martin promised for the future, the expenses for its continuous modernization, for crews’ training, and for its use begins. An hour flight on a F-35A – according to US Air Force documents – costs over 42,000 dollars. This would mean that the 5000-hour flights carried out by the Amendola F-35 fighters alone will cost our public coffers 180 million euros.