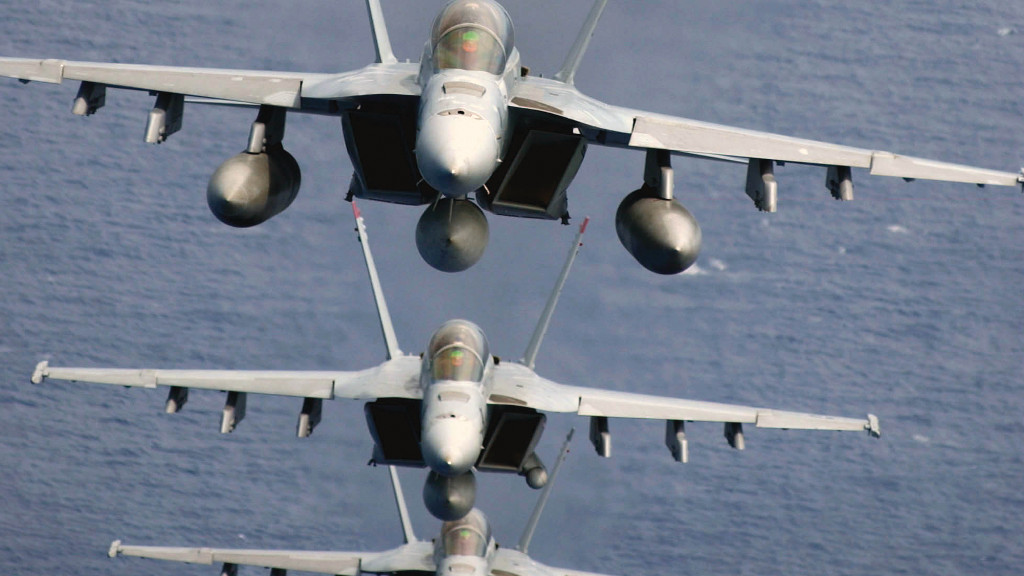 There is no question that, across the planet, the biggest user of fossil fuels is the military. All those fighter jets, tanks, naval vessels, air transport vehicles, Jeeps, helicopters, humvees, and drones burn massive amounts of diesel, and gas daily, creating vast carbon emissions. So you’d think that discussions about the climate emergency would focus on the military’s carbon bootprint, or at least place it at the top of concerns.

But you would be wrong. Aside from a few lonely voices, the military is seemingly exempt from the climate discussion.

That was vividly apparent in December 2019, when the NATO summit coincided with the opening of COP25 in Spain. The NATO summit focused almost entirely on the Trump administration’s harangue that NATO members aren’t spending nearly enough on military weapons. Meanwhile, COP25 focused on “carbon markets” and nations falling behind in their commitments to the 2015 Paris Accord.

Those two “silos” should have been combined to reveal the absurd premise operating behind both: that somehow the climate emergency can be met without de-escalating the military. But as we shall see, that discussion is forbidden at the highest levels.

That same disconnect was apparent during the 2019 Canadian federal election, which we were told was all about the climate. But throughout the campaign, as far as I could determine, not a single mention was made of the fact that the Trudeau Liberal government has promised a whopping $62 billion in “new funding” for the military, raising Canada’s military spending to more than $553 billion over the next 20 years. That new funding includes $30 billion for 88 new fighter jets and 15 new warships by 2027.

Bids to build those 88 new jet fighters must be submitted by Spring 2020, with Boeing, Lockheed Martin, and Saab in fierce competition for the Canadian contracts.

Interestingly, Postmedia News has reported that of the top two contenders, Boeing’s Super Hornet fighter jet “costs about $18,000 [USD] an hour to operate compared to the [Lockheed Martin] F-35 which costs $44,000” per hour.

Lest readers assume that military pilots are paid CEO-level salaries, it’s important to state that all military hardware is horrifying fuel-inefficient, contributing to those high operating costs. Boston University’s Neta Crawford, co-author of a 2019 report entitled Pentagon Fuel Use, Climate Change, and the Costs of War, has noted that fighter jets are so fuel-inefficient that fuel use is measured in “gallons per mile” not miles per gallon, so “one plane can get five gallons per mile.” Similarly, according to Forbes, a tank like the M1 Abrams gets about 0.6 miles per gallon.

The Pentagon’s Fuel Use

According to the Costs of War report from the Watson Institute at Brown University, the US Department of Defence is “the single largest user” of fossil fuels in the world, and “the single largest producer of greenhouse gases (GHG) in the world.” That statement was echoed in a similar 2019 study issued by Oliver Belcher, Benjamin Neimark, and Patrick Bigger from Durham and Lancaster Universities, called Hidden Carbon Costs of the ‘Everywhere War’. Both reports noted that “existing military aircraft and warships [are] locking the US military into hydrocarbons for years to come.” The same could be said of other countries (like Canada) that are buying the military hardware.

Both reports state that in 2017 alone, the US military bought 269,230 barrels of oil per day and spent more than $8.6 billion on fuel for the air force, army, navy, and marines. But that 269,230 bpd figure is only for “operational” fuel use – training, using, and sustaining the weapons hardware – which is 70% of the military’s total fuel use. The figure does not include “institutional” fuel use – the fossil fuels used to maintain the US military’s domestic and foreign bases, which number more than 1,000 around the world and account for 30% of total US military fuel use.

As Gar Smith, editor emeritus of Earth Island Journal, reported in 2016, “The Pentagon has admitted to burning 350,000 barrels of oil a day (only 35 countries in the world consume more).”

The Elephant in the Room

In a remarkable piece, The Pentagon: The Climate Elephant, originally published by the International Action Center and Global Research, Sara Flounders wrote in 2014: “There is an elephant in the climate debate that by U.S. demand cannot be discussed or even seen.” That elephant is the fact that “the Pentagon has a blanket exemption in all international climate agreements. Ever since the [COP4] Kyoto Protocol negotiations in 1998, in an effort to gain US compliance, all US military operations worldwide and within the US are exempt from measurement or agreements on [GHG] reduction.”

At these 1997-1998 COP4 negotiations, the Pentagon insisted on this “national security provision,” giving it an exemption from reducing – or even reporting – its greenhouse gas emissions. Moreover, the US military insisted in 1998 that at all future formal discussions on climate, delegates are actually prevented from discussing the military’s carbon bootprint. Even if they wanted to discuss that, they can’t.

According to Flounders, that national security exemption includes “all multilateral operations such as the giant US-commanded NATO military alliance and AFRICOM [United States Africa Command], the US military alliance now blanketing Africa.”

Ironically, the US under George W. Bush then refused to sign the Kyoto Protocol. Canada followed suit, withdrawing from Kyoto in 2011.

Costs of War author Neta Crawford has provided further clarity on this military exemption. In a July 2019 interview, Crawford stated that the national security provision “specifically exempted military bunker fuels and the military’s activities in war from being counted as part of the overall [GHG] emissions. That’s for every country. No country is required to report those [military] emissions. So it’s not unique [to the US] in that respect.”

So in 1998, the US obtained an exemption for all countries’ militaries from having to report, or cut, their carbon emissions. This privileging of war and the military (indeed, the entire military-industrial complex) has largely escaped notice for the past twenty years, even by climate activists.

As far as I can determine, no climate negotiator or politician or Big Green organization has ever blown the whistle or even mentioned these military exemptions to the press – a “cone of silence” that is baffling.

In fact, according to Canadian researcher Tamara Lorincz, who wrote a 2014 draft working paper entitled Demilitarization for Deep Decarbonization for the Swiss-based International Peace Bureau, in 1997 “then-US Vice-President Al Gore joined the American negotiating team in Kyoto,” and was able to secure the military exemption.

Even more baffling, in a 2019 op-ed for the New York Review of Books, climate activist Bill McKibben defended the military’s carbon bootprint, stating that the Pentagon’s “use of energy pales next to that of the civilian population,” and that “the military has actually been doing a not-too-shabby job of driving down its emissions.”

At the COP21 meetings that led to the 2015 Paris Climate Agreement, a decision was made to allow each nation-state to determine which national sectors should make emissions cuts before 2030. Apparently, most nations have decided that the military exemption (especially for “operational” fuel use) should be maintained.

In Canada, for example, shortly after the recent federal election, The Globe & Mail reported the re-elected Liberal minority government has listed seven departments that will play “major” roles in cutting carbon emissions: Finance, Global Affairs, Innovation, Science and Economic Development, Environment, Natural Resources, Intergovernmental Affairs, and Justice. Conspicuously absent is the Department of National Defence (DND). On its website, the DND touts its “efforts to meet or exceed” the federal emissions target, but notes that those efforts are “excluding military fleets” – i.e., the very military hardware that burns so much fuel.

In November 2019, the Green Budget Coalition – comprised of some 22 leading Canadian NGOs – released its 2020 carbon-cutting recommendations for federal departments, but made no mention at all of military GHG emissions or the DND itself. As a result, the military/climate change “cone of silence” continues.

In 2010, military analyst Nick Turse reported that the US Department of Defense (DOD) awards many billions of dollars in energy contracts each year, with most of the money going to purchase bulk fuel. Those DOD contracts (worth more than $16 billion in 2009) go primarily to top petroleum suppliers like Shell, ExxonMobil, Valero, and BP (the companies named by Turse).

All four of these companies were and are involved in tar sands extraction and refining.

In 2007, US legislators were debating the new US Energy Security and Independence Act. Some policymakers concerned about climate change, led by Democratic congressman Henry Waxman, managed to insert a provision called Section 526, which made it illegal for US government departments or agencies to buy fossil fuels which have a large carbon footprint.

Given that the DOD is by far the largest government department purchasing fossil fuels, Section 526 was clearly directed at the DOD. And given that the production, refining, and burning of Alberta tar sands crude releases at least 23% more GHG emissions than conventional oil, Section 526 was also clearly directed at tar sands crude (and other heavy oils).

“This provision,” Waxman wrote, “ensures that federal agencies are not spending taxpayer dollars on new fuel sources that will exacerbate global warming.”

Somehow, Section 526 was overlooked by the powerful oil lobby in Washington and it became law in the US in 2007, prompting the Canadian embassy to fly into action.

The American Petroleum Institute formed a Section 526 “working group” that met with Canadian embassy staff and Alberta representatives, while Canada’s ambassador to the US at the time, Michael Wilson “wrote to the US Secretary of Defense that month, stating that Canada did not want to see Section 526 applied to fossil fuels produced from Alberta’s oil sands,” Dembicki wrote.

Was Wilson’s letter an attempt to save lucrative bulk fuel contracts issued by DOD to companies (such as Shell, ExxonMobil, Valero, and BP) involved in the tar sands?

The intense lobbying worked. The DOD’s bulk fuels procurement agency, the Defence Logistics Agency – Energy, refused to allow Section 526 to apply to, or change, its procurement practices, and later withstood a similar Section 526 challenge mounted by US environmental groups.

In 2013, Tom Corcoran, executive director for the Washington-based Center for North American Energy Security, told The Globe & Mail in 2013, “I would say it’s a major victory for the Canadian oil sands producers because they supply a significant amount of the crude oil that is refined and converted to product for the Department of Defence.”

In November 2019, former US president Jimmy Carter wrote an impassioned op-ed for Time Magazine, arguing that “empowering women and girls” can help solve the climate crisis. He stated that the climate emergency is potentially so dire, and the time-frame for action so short, that we must stop “tinkering at the edges of our global energy industry” and instead “think bigger, act quicker, and include everyone.”

But Carter never once mentions the military, which apparently is not included in his definition of “everyone.”

Unless we actually do start to “think bigger” and work to dismantle the war machine (and NATO), there is little hope. While the rest of us attempt to transition to a low-carbon future, the military has carte blanche to burn all the fossil fuels it wants in its hardware for never-ending war – a situation that exists largely because most people know nothing about the military exemption from climate emissions reporting and cutting.