By David Swanson, director of World BEYOND War 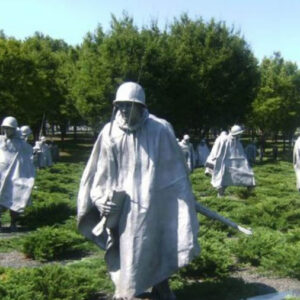 Now being planned and built in Washington, D.C., which is already just about coated in monuments to wars and particular warriors, are monuments to: World War I, the Gulf War, Native American fighters in wars, African Americans who fought in the U.S. war for independence, and the War on Terrorism, as well as one to Eisenhower the Warrior.

That War on (make that “of” — an easy alteration) Terrorism monument is supposed to be built by 2024, and the war it glorifies is due to end sometime in the next millennium or, as war planners like to say, “imminently.”

Most countries glorify their deeds, but many also mourn and regret and warn against repetition of their worst crimes. Not the good old USA, no sir. George Bush the elder said he’d never apologize and didn’t care what the facts were. That’s telling ’em.

I’m glad to be involved in planning to protest and prevent a weapons parade on November 10th. But the wave of new war memorials in Washington, D.C., deserves all the opposition that Trump’s parade is receiving, 1,000-fold. The memorials will last much longer than the parade — assuming that the militarism they glorify doesn’t put an end to all of us.

One year after the deadly rally in Charlottesville, the memorials denounced there as racist still stand. They stand because of a Virginia law forbidding taking down war memorials. Once any monstrosity is erected, if it’s for war, it’s here for eternity. That is sure to be true in Washington, D.C. as well. Can you imagine trying to get one of these desecrations of all that is decent removed after it’s up?

If you’re wondering, Virginia does not have a law banning the removal of peace memorials. You can take one down if you can find one.

How does Congress get away with dumping the majority of discretionary spending into militarism each year? How does  Trump get away with telling European nations to spend on war based on the size of their economies? Part of the answer is a culture of war. We ought to take a little more seriously the danger that lies in what we choose to glorify.

These war monuments do not mourn the dead. They omit the vast majority of the dead entirely. The Vietnam Memorial alone would eat up the space being used by several others if it included the names of everyone killed in that war. The war “on terrorism” has been a one-sided slaughter, illegal, immoral, counter-productive, and environmentally and fiscally and culturally catastrophic. Of the tiny percentage of deaths you’re supposed to care about, the majority have come by suicide. The monument will mention nothing of any of that.

They’re building a monument to black fighters in the U.S. war for wealthy white male independence that will not only not mention the role of that war in advancing continental genocide, but also omit its role in preserving slavery. The African Americans who fought on the British side for actual independence cannot be expected to show up in monumental glory. And where is the monument to slavery, whose lasting legacy is certainly what has spared us an enormous pro-union Civil War monument eating up half the National Mall?

The tiny, hidden monument to the imprisonment of Japanese Americans is proving entirely insufficient to the task it takes on with its “never again” language. The absence of any serious peace monuments is killing us.

Will the Gulf War monument include babies taken out of incubators? I know I say that at the risk of giving them ideas, but I’m sure they’ve already thought of worse. Slaughter of thousands of retreating troops maybe? Decades of brutal blowback perhaps?

And World War I? What is that about? The total lack of World War I-justifying mythology in our culture, the surrender to its obvious insanity, makes WWI a weak link in the case for World War II’s status as the most glorious mass-killing in history, given the impossibility of World War II having happened without World War I. But now they want to remind us of World War I?

Clearly the idea is that all war must be glorious regardless of what idiots started it for what nonsensical, sadistic, narcissistic, greedy, cowardly, dishonest reasons. That seems to me exactly the wrong message to be surrounding the White House windows with right now.