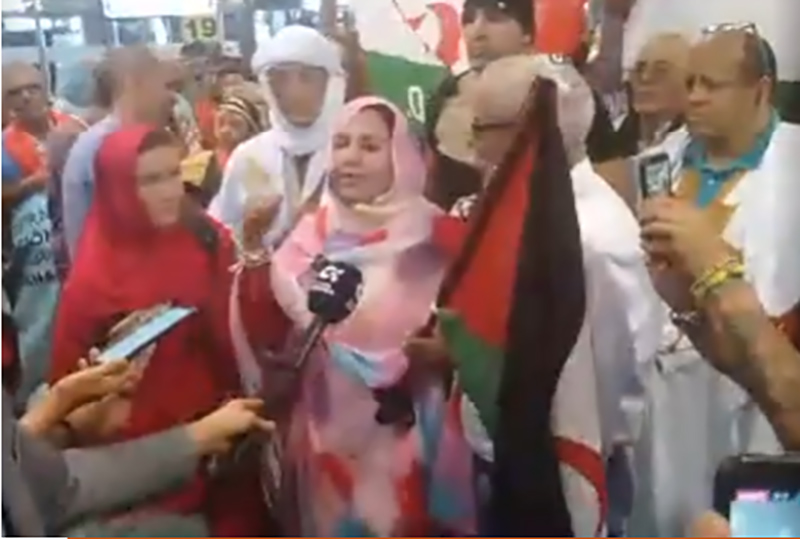 Sultana Khaya, Ruth McDonough and Tim Pluta arrived at the Las Palmas airport to be greeted by thousands of supporters that gathered to honor them. Khaya left her beloved homeland in Western Sahara to obtain medical treatment.

For the last 554 days Khaya and her family had been forcibly confined to their house. Moroccan Occupation Forces periodically invaded, beat, used sexual violence and injected them with unknown substances. They raped Khaya and her sister in front of their 86-year-old mother. Furthermore, their water was poisoned, furniture and property destroyed, and electricity cut-off.

The presence in Khaya’s house of US-based volunteers since March 16th stopped the invasions, however; it did not stop the arbitrary detention of the Khaya family, nor the brutal beatings of community members that visited the home. On May, 16, the Moroccan forces smashed a large truck 3 times into the house in the middle of the night in an apparent unsuccessful attempt to either to harm the residents and/or make the home uninhabitable.

Khaya is a Saharawi human rights defender whose work focuses on promoting the right of independence for the Saharawi people and ending violence against Saharawi women, through nonviolent activism. She serves as the president of the Saharawi League for the Defense of Human Rights and the Protection of Western Sahara’s Natural Resources, and is a member of the Saharawi Commission against the Moroccan occupation (ISACOM). She is a nominee for the Sakharov Prize and winner of the Esther Garcia Award.

Just Visit Western Sahara (JVWS) is a network of groups and individuals committed to peace and justice, protection of human rights, respect for international law, all of which have been denied to the Saharawi people, JVWS further encourages Americans and international travelers to witness the beauty and appeal of Western Sahara, and to see the reality of the Moroccan occupation for themselves.