Meretz UK hosted an event on 7th July in London’s Jewish Community centre JW3, to discuss the prospects, advantages and likely outcomes of recognition of the state of Palestine alongside the state of Israel by the British Government. Sir Vincent Fean, former UK Consul General in Jerusalem, and Chair of the Balfour Project, talked frequently with the Palestinians during the negotiations by the US Secretary of State, John Kerry. He shared insights from his experience in the region and thoughts about the issue. Most of the event was dedicated to Q & A sessions with the audience. 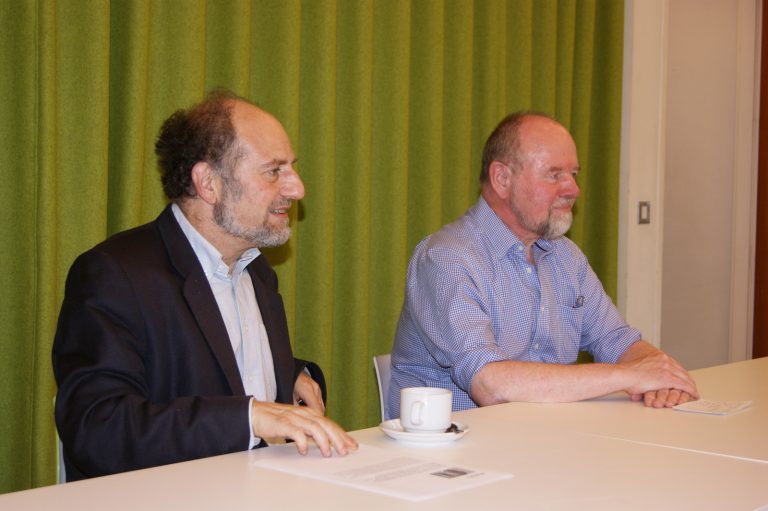 The first premise of the talk was that, as British people, it is not our role to say what Israel and Palestine should do, but rather to suggest what Britain should do, looking at and dealing with both sides as equals. “Coexistence entails parity of esteem between the two peoples,” said Sir Vincent. The other premise was that Palestine is not sovereign today but an occupied territory. Recognition will be a step towards independence.

The discussion centred on these questions:

Can Britain recognise a Palestinian state alongside Israel?

There are two ways of defining a state: declaratory and constitutive. The first entails recognition: when many different states recognise you. As of today, 137 states have recognised Palestine; Sweden did so in 2014. Out of 193 member states in the UN today, about two-thirds have recognised Palestine, so Palestine passes the declaratory test.
The constitutive method entails four criteria: Population, defined borders, governance and the ability to conduct international relations.a. The population is straightforward: 4.5 million Palestinians live in the Occupied Palestinian Territories.
b. The border issue is “confused” by the illegal Israeli settlements, but logic tells us to refer to the pre June 1967 ceasefire borders. When Britain recognised Israel in 1950 it did not recognise its borders, nor its capital – it recognised the state.
c. With regard to governance, there is a government in Ramallah which controls education, health care and taxes. The Palestinian Authority is also de Jure the legitimate authority in Gaza. The British government recognises states, not governments.
d. As for the conduct of international relations, Israel officially recognised the PLO as the sole legitimate representative of the Palestinian people. The PLO conducts international relations on behalf of the Palestinian people.

Should Britain recognise the Palestinian state alongside Israel?

In present circumstances, recognising the state of Palestine equates to Britain recognising the equal rights of the two peoples to self-determination. It has already recognised the right of the people of Israel to self-determination, and our policy is to seek a two-state solution. It’s also an affirmation that “sovereignty minus” for Palestine, advocated by Israeli Prime Minister Binyamin Netanyahu, is inadequate. A policy of creating a state of bantustans means a state of apartheid.

“Recognition does not preempt negotiation, and should not be the fruit of it, but a precursor of it. Self-determination for both the peoples of Israel and Palestine is a right, not a bargaining chip. The Israelis already have it, and the Palestinians deserve it.”

Will Britain recognise a Palestinian state alongside Israel?

We will one day. The Labour Party, Lib Dems and SNP have recognition of a Palestinian state alongside Israel as their policy. There’s a sizeable minority of Conservative MPs who agree they would, and in 2014 our parliament voted to recognise Palestine alongside Israel, 276 in favour and only 12 against.

Is there a trigger for recognition? Netanyahu’s electoral promise to annex settlements is potentially a trigger, as this is an existential threat to the outcome of two states.

In the Q&As, a question was asked whether Britain can promote recognition as a measure to prevent future annexation of settlements by the Israeli government, or rather react to it. Sir Vincent assumed the UK doesn’t have the capacity to prevent Israel from annexing settlements, but the introduction of an annexation bill by the Israeli government can become a trigger for recognition of Palestine. Rhetorical condemnation of Israeli annexation of settlements would have no effect.

What good would British recognition do?

The line the former Conservative leader and Foreign Secretary, William Hague, took about recognition in 2011 was that “The British government reserves the right to recognise Palestine at a time of our own choosing, and when it can best serve the cause of peace”. A pragmatic politician would avoid this step these days, to avoid provocation, and mainly because of the criticism he/she would receive from Trump and Netanyahu and their administrations.

On the other hand, recognition is wholly consistent with the outcome of a two-state solution. British policy remains that of the EU: Jerusalem as a shared capital, a just and agreed solution to the refuge problem, negotiations on the basis of 1967 borders, etc. Sir Vincent added to that list full, phased withdrawal of the IDF from the OPT, as advocated by President Obama, and an end of the closure of Gaza.

Recognition brings hope to two-staters in both countries, in days when hope is in short supply. It encourages Ramallah not to hand the keys to Netanyahu. Here in the UK, it changes the mindset of people, from managing the conflict to addressing its causes, on the understanding that the two peoples left to themselves cannot solve it by themselves, and that the current US Administration is not acting as an honest broker.

A British decision to recognise both states would find an echo in countries like France, Ireland, Spain, Belgium, Portugal, Luxembourg and Slovenia.

During the Q&As, Sir Vincent was asked whether British recognition of Palestine would not feed the Israeli settler lobby argument that “the world hates us”? He answered that it’s hard for anyone in Israel or anywhere else to say they don’t believe in equal rights. The defenders of the status quo would surely portray this as an attack on the state of Israel, aiming to conflate two different things: the state of Israel and the settlements enterprise. UN Security Council Resolution 2334, adopted as Obama left office, rightly distinguishes between the state of Israel and the settler enterprise. They are not at all the same.

Recognition is about what we British people can do, and we should stand by our principles of equal rights.

Would recognition by the UK persuade Israel to end the Occupation? No, but it is a step in the right direction: towards equal rights and mutual respect by and for both peoples. Prime Minister Netanyahu once said he did not want a binary state. So what is the policy? The status quo / Sovereignty minus / Kick the can down the road and build? None of those amounts to equal rights. PM Netanyahu had also said that Israel will always have to live by the sword. It doesn’t have to be that way.