Rusty Whistles: The Limits of Whistleblowing 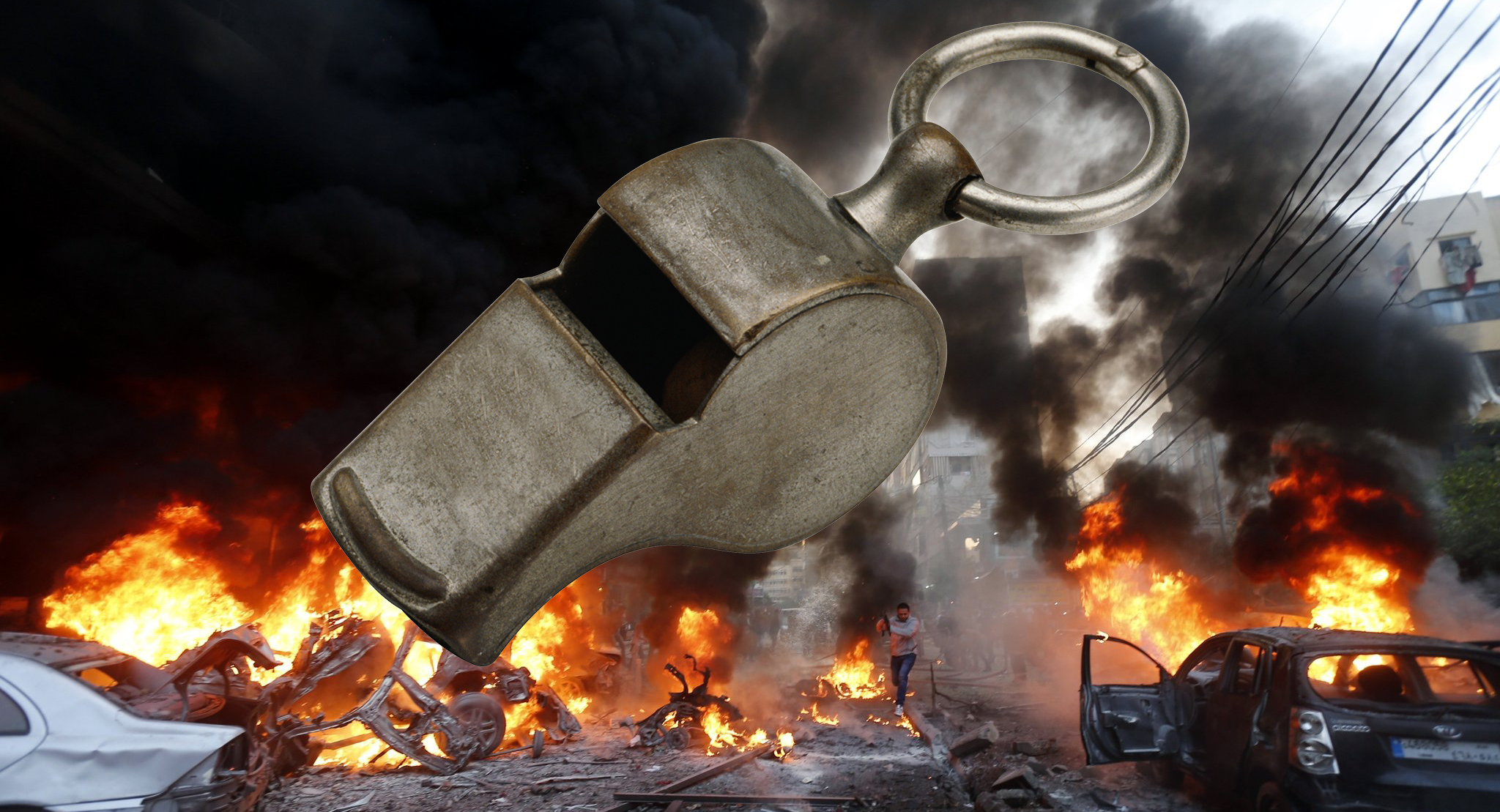 I’ve been reading a book called Whistleblowing for Change, edited by Tatiana Bazzichelli, a beautifully put-together volume with numerous articles about whistleblowing, about art and whistleblowing, and about building a culture of whistleblowing: of supporting whistleblowers, and of making better known the outrages they’ve blown the whistle on. I want to focus here on the sections of this book written by whistleblowers (or in one case a whistleblower’s mother).

The first lesson I draw (which I suppose I could have just learned from Chelsea Manning’s Twitter feed) is that whistleblowers themselves are not necessarily the best sources for wise analysis of the information they’ve bravely and generously made available. They can be, of course, and often are, including in this book, but clearly not always. We owe them an enormous debt of gratitude. We owe them ever stronger efforts to get them rewarded rather than punished. But we should be clear on how to read a collection of their writings, namely as insights into the thinking of people who did something horribly wrong and then something tremendously right — who may be anywhere from brilliant to utterly incompetent at explaining why or at analyzing how society should be structured differently to avoid any more of the horrible wrong. Unfortunately, the essays by whistleblowers that I find best — some of them well worth the price of 1,000 books — are placed toward the tail end of this book, preceded by those I find most problematic.

The first chapter of this book was written by, not a whistleblower but a whistleblower’s mother — assuming that someone who, for the best of reasons and at great personal risk, intends to make public useful information but unwittingly advances militaristic propaganda, is a whistleblower. Reality Winner’s mother recounts with great pride how her daughter turned down a college scholarship to join the Air Force, where she identified some 900 locations to blow up who knows how many people. Winner’s mother seems to simultaneously think of this as some great service to “the country I once believed in” (the belief has clearly not been fully overcome) and some sort of horrible “devastation” and “damage” — which sounds as if her daughter had been blowing up empty buildings. Billie Jean Winner-Davis goes on to inform us that Reality Winner not only blew lots of people up but — supposedly along the same admirable line as that activity — did local volunteer work, went vegan for the climate, and (apparently honestly believing the story) donated to the White Helmets. Neither Winner-Davis nor the book’s editor, Bazzichelli, ever points out that bombing people might not be a philanthropic enterprise, or that the White Helmets was (is?) a propaganda tool. Instead it’s straight into the full-throated Russiagate claims about what Winner leaked, despite available knowledge that what she leaked proved nothing and was part of a lie-filled campaign to gin up hostility between the two governments owning most of the nuclear weapons on Earth. This is not a story about how we came to learn about Evil Dr. Putin depriving Hillary of her rightful throne. This is a story about a culture in which an intelligent young woman and her mother can believe that killing large numbers of people is more humanitarian than going to college, that a slick propaganda tool for overthrowing the government of Syria is righteous, and that tales of election thefts, urination, and presidential servitude are based in a small-r reality. It’s also a tale of absurd secrecy and sadistic punishment. Whether Reality Winner cares to hear it or not, a lot of us demanded her freedom who believed she’d done harm and certainly not any sort of service.

The second chapter of the book sticks with sources put at risk by the same pair of reporters at the Intercept, in this case John Kiriakou, who opens with praise of the CIA and shamelessly describes kicking in doors and blasting away with automatic weapons as the good work of “counter-terrorism.” After a heroic account (would-be film script?) of tracking down a man named Abu Zubaydah by raiding 14 different places at once, Kiriakou writes: “We identified Abu Zubaydah by comparing his ear with that from a six-year-old passport photo and, realizing that it was indeed him, we rushed him to a hospital for emergency surgery to stop the bleeding.” They’d shot him three times. It’s unclear whether they would have bothered to try to stop the bleeding if their super-cool ear-identification had shown him to be the wrong guy, or how many other people they shot that day. Kiriakou writes that he later refused to participate in torture and protested the CIA’s torture program through internal channels, although elsewhere he’s said that he did not object internally. He then claims to have gone on TV and told the truth about waterboarding, although what he said on TV (and presumably what he believed) was that one quick waterboarding got useful information out of Abu Zubaydah, whereas we’ve learned that in fact 83 waterboardings (predictably) got nothing out of him. Kiriakou also told ABC News in that interview that he’d approved of waterboarding but later changed his mind. Kiriakou has done a lot of great, and some dubious, writing since being persecuted and prosecuted by the U.S. government (not for torture but for speaking out of line), and he’s offered some great advice to potential whistleblowers. But murder isn’t more acceptable than torture, the CIA has no business engaging in lawless violence all over the world, and waterboarding would not become acceptable if it “worked” once. We should be grateful for the information about the CIA, add it to our stockpile of reasons why that agency should be abolished (not fixed), and not necessarily ask the provider of the information what should be done with it.

Chapter 3 is by drone whistleblower Brandon Bryant. Like all of these stories, it’s an account of the moral suffering that leads to whistleblowing, and the outrageously upside-down response it’s rewarded with. This chapter also gets a few things right for a change. Rather than praising the Air Force or the CIA, it explains the pressure of the poverty draft. And it calls murder murder: “I am sure I have seen children running into a building I was supposed to blow up. My superiors told me I had not seen any children. They make you kill indiscriminately. It was the worst feeling that I ever had, like if my soul was being ripped out of me. Your country makes you into a murderer.” But Bryant remains intent on distinguishing murder from the good and proper blowing up of people with missiles, if done right, and distinguishing drone warfare in general from more proper forms of warfare: “The drone war does the opposite of preventing and containing war. It removes the understanding and judgement of the warrior. And as a drone operator, my role was to push a button, to execute targets outside of combat, targets labelled as suspicious without further justification, explanation, or evidence. It is the most cowardly form of war.” The word “cowardly” is one of the most frequently used words in the essay (as if murder would be OK if someone bravely took risks to do it): “What’s more cowardly than being able to kill someone half a world away and have no skin in the game?” “That’s what this technology does when it’s not used with responsibility.” “If America is the greatest country in the world, we are given the responsibility to not abuse this type of technology.” (And what if it’s one of the lousiest, most destructive countries in the world, what then?) Bryant turns to religion for help, in vain, and gives up, declaring that there is just nobody who can help him. He may be right. How could I possibly claim to know whether anyone could help him? (And why would he want help from some jerk who complains that he’s still dignifying warfare?) But the failure of our society to make known to the general public that there are within it thousands of extremely smart and moral and peaceful people willing to try to help seems right in line with the problem of the poverty draft and the billion-dollar military advertising campaign that isn’t matched by anything from the peace movement. Most military whistleblowers went into the military meaning well and came out having painfully realized something that millions of people could have told them when they were eight years old but didn’t or weren’t believed.

Chapter 4 is by MI5 whistleblower Annie Machon, and it’s a survey of the state of whistleblowing from which one can learn a lot and have few complaints with, though I’d rather have read about what Machon blew the whistle on: British spies spying on British legislators, lying to the government, allowing IRA bombings to happen, false convictions, an assassination attempt, etc. For some great video remarks by Machon and many others, including Kiriakou, click here.

Later in the book is a chapter by drone whistleblowers Lisa Ling and Cian Westmoreland that very helpfully surveys the state of drone warfare, the technology, the morality — without ever suggesting that warfare would be acceptable if done otherwise. This is a model of ideal whistleblower writing. It’s accessible to those with little knowledge of drones, helps debunk what little “knowledge” someone may have gained from Hollywood or CNN, and uses the knowledge and insights of people who were part of the problem to expose it for the horror it is, while placing it in proper context.

Also in the book is drone whistleblower Daniel Hale’s statement to the judge, which together with his letter to the judge ought to be required reading for every member of the human species, including this bit: “Your Honor, I oppose drone warfare for the same reasons I oppose the death penalty. I believe capital punishment to be an abomination and an all-out assault on common human decency. I believe that it is wrong to kill no matter the circumstances, yet I believe it is especially wrong to kill the defenseless.” Hale points out, for those who still want to kill human beings but perhaps not the “innocent” ones, that the death penalty in the U.S. kills innocents but U.S. drone murders kill a far higher percentage: “In some cases, as many as 9 out of 10 individuals killed are not identifiable. In one particular instance, the American-born son of a radical American Imam was assigned a Terrorist Identities Datamark Environment or TIDE pin number, tracked and killed in a drone strike along with 8 members of his family while they ate lunch together a full 2 weeks after his father was killed. Asked about why the 16 year old Abdul Rahman TPN26350617 needed to die, one White House official said, ‘He should have had a better father.'”