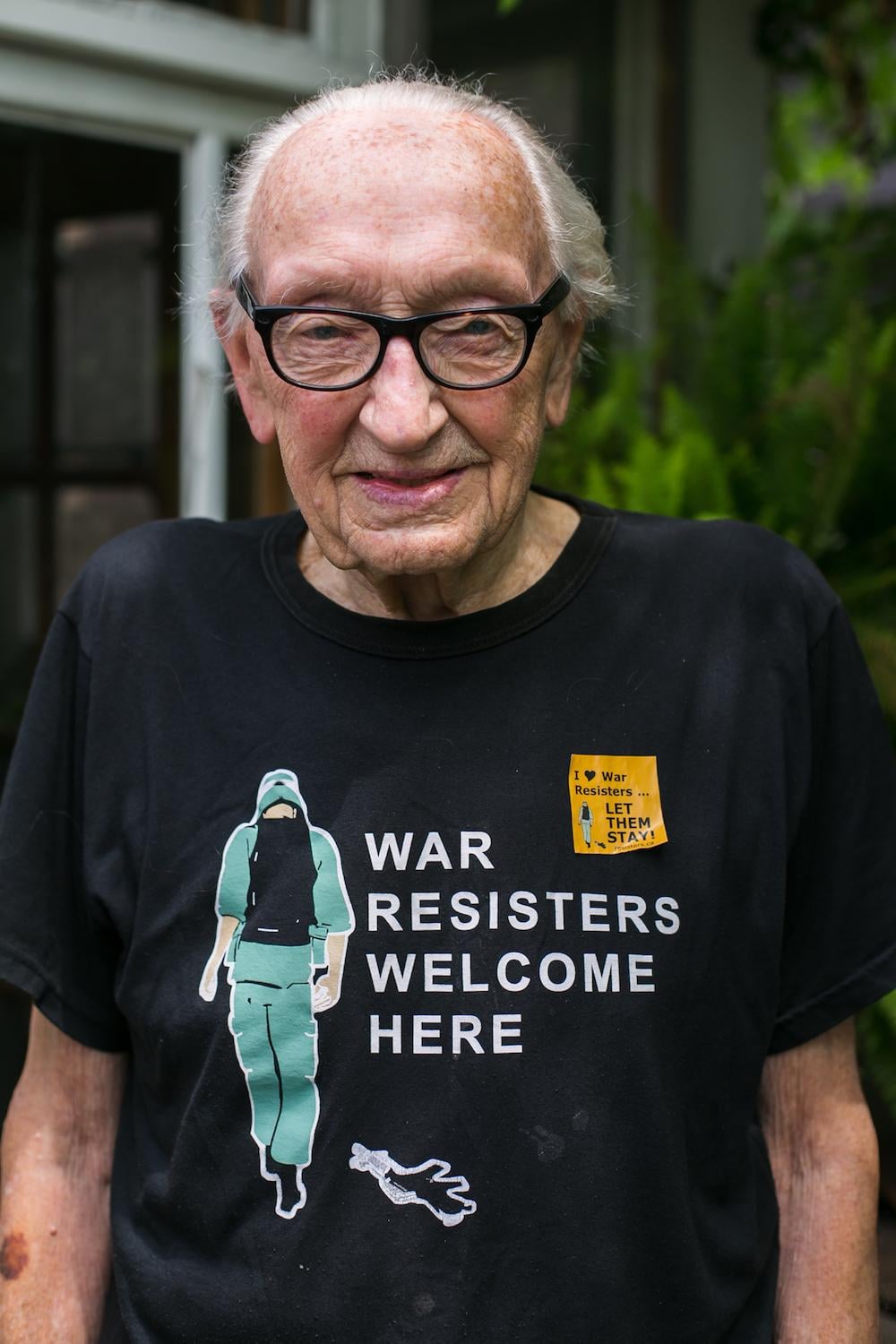 Despite the horrors and despair of the past century, there have always been those who have borne witness to and resisted them. And therein lies our history and our hope. Such a person was Frank Showler, who we lost last Thursday at the age of 102. Born in the aftermath of the mass slaughter of WWI, Frank was part of a generation who came by their pacifism and anti-capitalism honestly, having inherited the wounds and trauma of the previous decade and challenged themselves to sincerely ask: how do we prevent that from ever happening again, and how do we transform a system that perpetuates and profits from mass slaughter?

Strongly influenced by pacifist United Church Ministers in Toronto, Frank refused to sign up to kill people in WWII. Although the United Church changed its pacifist position in support of the war, Frank insisted that Jesus had not changed his mind on the issue, and neither would Frank, who was nabbed by the authorities and placed into a series of work camps. Frank argued that bombing Germans to prove that bombing Britons was wrong was, well, wrong, and that all the war would do was decide who had the most violence. Turns out “we” had the most violence, and he dedicated his life to explaining why this whole system was wrong. He often sighed when people referred to it as The Good War, seeing as how 80 million were killed.

For his whole adult life, he, along with his beloved Isabel, resisted war while supporting its victims. Family vacations in the 50s were built around blockades of US nuclear weapons bases where Frank would disappear for a day or so as he risked arrest to try to stop the placement of these genocidal weapons in Midwestern farm fields. In London Ontario he was part of anti-nuclear weapons peace parades and built disarmament work with Isabel. He also worked tirelessly to end the Canada/US war against the people of Vietnam (yes, Virginia, Canada was involved up to its neck), welcomed Chilean and other Latin American refugees from the death squad dictatorships of the 60s and 70s and 80s, housed war resisters who arrived in Toronto with no place to stay, journeyed to the war zone in Nicaragua with Witness for Peace to try and prevent (once again) the use of Canadian weaponry then being used by the terrorist contras on the people of Nicaragua, resisted apartheid, and stood in solidarity with Indigenous people. And so much more.

There has been a decades-long saying that if Frank was not there, the demonstration did not happen. Frank’s dance card was always full: anti-nuclear, pro-refugee and LGBTQ, women’s rights, reproductive choice, supporting Muslim detainees during the so-called War on Terror. And when he ambled up with that gentle gait of his to grab a picket sign, the common refrain was: “It’s an official demo. Frank’s here!”) And back in the days when we would hold massive solidarity dances in Toronto, his dance card was always full there too: there was always a lineup of those who wanted to cut a rug with Frank.

Like many new arrivals to Toronto, the first person I met was Frank. He was kind, avuncular, wise and patient with us. He had “seen it all” but it never made him jaded or bitter. He had the most wonderful, impish laugh, and a rolodex that he put into action whenever something needed to be done. Over the years, we shared many a jail cell and police wagon, and also dinners at his house where Isabel would recite side-splitting puns throughout the evening. She used to joke that as soon as the postal worker arrived, Frank would be at the door to grab everything, then retreat into the house and open stuff up. It was, Isabel joked, a classic case of “mail dominance.” He loved getting mail from War Resisters League and Fellowship of Reconciliation. He was a voracious reader. He would often call late in the evening because he’d read something and he’d say, “Well, Matthew, we have to do something about this.” So we’d figure out what needed to be done and get to work on it.

Starting in 1995 and running through 2002, we maintained a weekly vigil at Queen’s Park in solidarity with all the victims of the vicious Mike Harris regime. Frank would often hold the banner with Eldon Comfort, another long distance social justice runner (who lived to 103) and whose experience as a soldier during WW2 turned him into a pacifist as well.

The work we do as folks trying to “change the world” is hard and long and often frustrating, but I feel such gratitude for the remarkable people I have met along the journey whose wisdom and insights enrich our lives and help us find our way forward during hard times. Frank is now with Isabel, who predeceased him by a number of years. Damn, I’m going to miss him as I miss Isabel, but I also know they both left us with so many lessons along the way. Perhaps one of the most important ones was a lesson from Christ that we often talked about when we tried to convince churches to open their buildings to provide sanctuary to refugees. Too often, we heard from ministers and church boards all the reasons they “couldn’t” provide safety for those facing torture or death if deported. Rarely did we find someone who got that this was a faithful responsibility. At one such gathering, we were on a panel making the case, and Frank’s talk was, as always, modest and short. He concluded by looking at the assembled communities of faith and reminded them, in the words of JC himself, “Be not afraid.”

The other lesson was part of his love of Quakerism. I asked how, after a lifetime of social justice work, with all the setbacks we face along the way, he kept going. His response was beautiful: “We are not necessarily called to be successful, but we are called to be faithful.”

Frank and Isabel always kept the faith with a gentle, subversive, relentless persistence. And with some love and solidarity amongst each other, we can too.