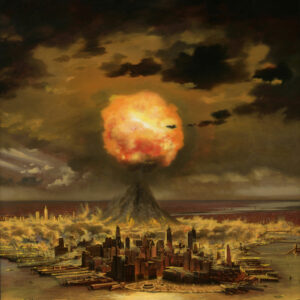 “Don’t let the perfect be the enemy of the good!”
“Don’t be such a purist!”
“Be strategic!”
“Do what’s possible!”
“You can’t deny reality / human nature / religious text.”

The phrases used to oppose proposals for major change haven’t changed much for centuries, in both meanings of that phrase. No doubt these sayings sound better in certain circumstances than others, depending on the details. But in general, I find that they sound worse since the status quo locked in the climate collapse, and since the risk of nuclear catastrophe reached it’s current record high and rapidly climbing position.

I’ve just read a new book called War, Law, and Humanity by James Crossland that looks at efforts to regulate or end war from the 1850s up through the beginning of the 1900s. One strain of thought was that war needed to be eliminated and replaced with nonviolent arbitration. Another was that war needed to be regulated, doctors and nurses admitted onto battlefields, standards upheld for the treatment of prisoners, particular weapons banned, etc. The peace advocates were mocked as dreamers. The humanizers were the “realists.”

One must now write history from a nonexistent future. History cannot actually judge anything or anyone because it will not exist any longer in the brains of any living homo sapiens. But we can, pre-extinction, imagine our way forward and look back. If we end in nuclear holocaust, will those who tried to end war still have been silly dreamers? Or will world government or mandatory arbitration or disarmament sound slightly less goofy if the alternative that peace advocates identified for many decades as apocalypse turns out to be apocalypse?

Crossland does a good job of telling the story of the transition from wars in which the wounded were left to moan in agony on the battlefield for days before dying to wars in which great steps were taken to save the wounded and if possible get them ready to head out for more killing and possibly dying. The Crimean War brought with it war journalism, which brought with it public concern for the discarding of wounded soldiers as so much rubbish. Very quickly so-called unnecessary suffering was distinguished from supposedly necessary suffering. Much of the suffering was from diseases like cholera that still kill the primary victims of war — now civilians, but back then soldiers.

The Northern side of the U.S. Civil War borrowed many ideas from the humanizers of the Crimean War, because the U.S. public cared about soldiers, and because the military came to see healthy soldiers as more useful than sick or dead ones.

The U.S. in turn inspired Europeans to push the regulation of proper mass-murder extravaganzas further, resulting in the first Geneva Convention and the Red Cross. This inspiration was in the area of health and medicine, but also in the area of law. Francis Lieber’s Lieber Code laid out the limitations on proper civilized warfare and stipulated that any and all limitations could be waived in the name of “military necessity” or — in other words — whatever horror General Sherman felt like committing. Thus, both humanitarians and eager mass-killers were equally pleased.

During the U.S. Civil War, Britain helped the Confederacy build ships. The U.S. after the war wanted reparations. The two countries went to arbitration in 1871 with representatives of Italy, Switzerland, and Brazil. Peace was made, and a model was made available for any countries that were willing, in certain cases, to settle for peace rather than their own desired wars.

In Europe, the peacemakers tried to win over humanizer conferences, while the humanizers sabotaged efforts directed at peace. Perhaps if both groups had fully united for one cause or the other, that cause would have had a better chance.

When the Czar of Russia backed efforts for peace, one leading peace advocate wrote to another that now, finally, “the world will not shriek Utopia!” I don’t know about the world, but the governments of the war-making nations certainly shrieked it, including at the Hague conference of 1899.

Many learned to shriek utopia a lot less after the Great War, which ended one century ago this November 11th. And then all but about 8 people and a couple of dogs learned to shriek it at top volume in chorus following the sequel and the war on Korea and the establishment of permawar. Millions of people are now such well-trained utopia shriekers that all one need do is mention war abolition or fossil fuel abolition or an end to meat industries or to incarceration or the banning of guns. In fact, all one need do in the United States is propose levels of destruction or standards of socialism at a European level to produce ear piercing shrieks of utopia from people who don’t for a minute imagine Europe to be utopian.

In acceptable, respectable non-utopia, climate collapse creates war. It does so all by itself. No humans are involved. Why should they be? Humans exerting their will to change things is utopian. In real, serious, shriekfree progressland, one cannot stop driving off a cliff, but one can devote tremendous energies to replacing the windshield wipers. If that’s the best that can be done, then it ought to be where all our energy goes. But nobody has ever identified any actual evidence that it’s the best that can be done, or any reason we should have any respect for ourselves if we don’t try to do better.