Protest Underway Now at Drone Base in New York State

Update 10:30 a.m. — Five have been arrested.  This morning, Monday, September 21, members of the grassroots human rights coalition, Upstate Drone Action to Ground the Drones and End the Wars were arrested for closing the main gate of Hancock Airfield to call a halt to the US weaponized drone program operated out of Hancock, in the Town of Dewitt, NY, by the 174th Attack Wing of the NYS Air National Guard.   Hancock is home to “hunter/killer” (the Pentagon’s phrase) MQ9 Reaper drone.  The theme of today’s event was:  Drones Kill Children.

Those arrested include Dan Bergavin and James Ricks of Ithaca and Ed Kinane, Bonny Mahoney and Julienne Oldfield of Syracuse, who held signs reading “Drones Kill Children” behind wooden figures of drone victims, including dead and dying children.

The activists stated at the gates, “We U.S. citizens and taxpayers look on with horror at the millions of refugees fleeing airborne terror and are shamed by our unconsented complicity.” 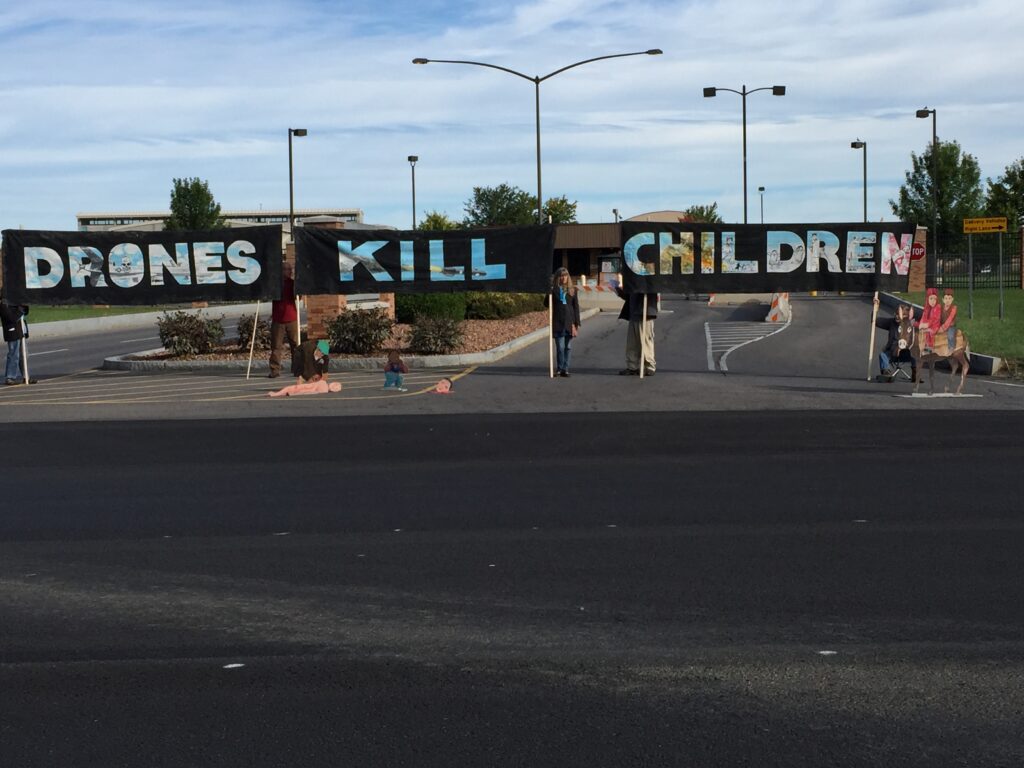 The United Nations General Assembly has declared today, September 21, 2015, an International World Day of Peace. As we stand here at the main gate of Hancock Air Base, its “hunter/killer” MQ9 Reaper drone arrogantly patrols Afghan skies 24/7 — killing innocent children there and likely elsewhere.

We U.S. citizens and taxpayers look on with horror at the millions of refugees fleeing airborne terror and are shamed by our unconsented complicity. Too many drone victims are precious and beloved children. We bring their images and their silenced voices to Hancock today.

As members of the Upstate Drone Action Coalition/ To Ground the Drones and End the Wars, we come to this War Base – home of the Reaper and the 174th Attack Wing of the NY National Guard – seeking to prevent the murder of these innocents, both on this day and for all days.

Our intent is to uphold law, both domestic and international.

Our intent is to bring the images of their victims both to the Hancock chain of command and to the U.S. public.

Specifically, our intent is to say NO to the maiming, murder and terrorizing of children.

Since 2010 this grassroots Coalition has sought to expose state-sponsored drone war crime. The crime is multi-layered. It includes extrajudicial execution/assassination, contempt for due process, the undermining of international law and national sovereignty, the murder of the undeniably innocent –- both within and beyond any recognized zone of war.

Unjustified on any level, save “might makes right,” such terrorism prepares fertile ground for perpetual conflict. This criminality benefits few besides war-profiteering corporations.

To the extent that WE, THE PEOPLE ignore our laws and our Constitution — allowing our government to kill whoever it wants, wherever it wants, however it wants — we make the world less safe for children here and everywhere. We demand that the Hancock chain of command and the United States to STOP THE KILLING!