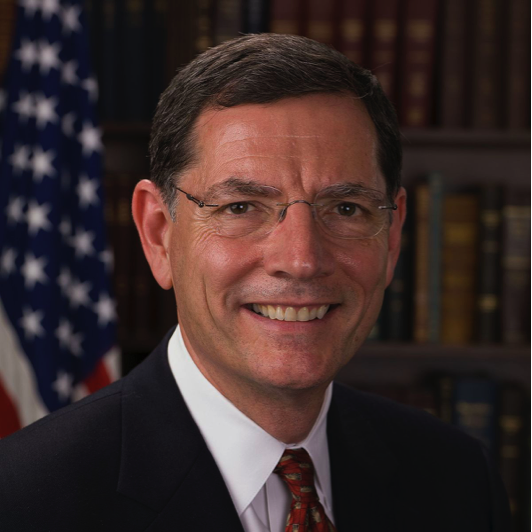 Sen. John Barrasso, (R-WY) is the Senate’s top
recipient of cash from the chemical industry.

There’s a battle raging in the halls of Congress that will soon determine if the U.S. government will take steps to protect people from deadly contamination caused by the release of Per- and polyfluoroalkyl substances, (PFAS) from military and industrial sites. The stakes couldn’t be higher with the health of humanity imperiled by these “forever chemicals.” More than a dozen bills are being discussed along with a handful of proposed amendments to the National Defense Authorization Act (NDAA) that could require the military and private polluters to clean up their PFAS contamination. Congress has the inherent power to rein in these chemicals. As a practical matter it is unlikely.

There are still some legislators on Capitol Hill who are fighting to protect public health, although their numbers are diminished. The story is simple. The military is the worst offender, poisoning millions around the globe through its use of aqueous film-forming foam (AFFF) in routine fire-training exercises. The AFFF contains high levels of carcinogenic PFAS and it is allowed to seep into groundwater, surface water, and municipal water systems, providing multiple pathways to human consumption.

Most lawmakers are reluctant to call out the military – even when it is clearly documented that the military is poisoning people to death. Many representatives are financially supported by the deep-pocketed chemical industry. Big-time players like Chemours (a spinoff of DuPont), 3M, and Dow Corning fight regulatory measures that threaten their bottom line. They’re terrified they’ll be held accountable for their impact on human health and the environment, although they don’t need to be too worried because they’ve purchased what they consider to be the best Congress ever. Too few members are guided by the dictates of conscience. For most members, money put them there. It’s the money they serve.

On July 9, the House accepted an amendment to the NDAA proposed by Reps. Debbie Dingell (D-MI) and Dan Kildee (D-MI) that would require the EPA to list perfluorinated chemicals as hazardous substances under the Superfund law. Designating PFAS as hazardous substance would force the military and industry to clean up the messes they’ve made.

In the upper chamber, a group of senators headed by Tom Carper, (D-Del), the Ranking Member on the Senate Environment and Public Works Committee, were unsuccessful in their bid to propose legislation that would have labeled PFAS as a hazardous substance. Doing so would kick in potentially hundreds of billions of dollars of liability for defense and industry, especially when both entities have known for two generations that they’ve been ravaging the world of genetics and human immune response by laying desolate the land and water.

Carper ran up against John Barrasso, the Chair of the Senate’s Environment and Public Works Committee. Barrasso is concerned about the potential liability facing his constituents: The Department of Defense, Chemours, 3M, and Dow Corning. Barrasso is the top recipient in the Senate of cash from the chemical industry. They’re poisoning us and he’s allowing it to continue.

Barrasso shifts the focus from his true benefactors to the rural water utilities and managers of municipal water and wastewater systems across the country. He says he doesn’t want to impose Superfund liability on these parties that provided the carcinogenic pathway to decimating human health. With liability for the military and industry out of the question, no one will be held responsible and that’s Barrasso’s intention.

In a July 10 statement, Barrasso slammed the House Rules Committee’s approval of the Dingell-Kildee amendment which would invoke Superfund liability on the all PFAS contaminants. He said, “House Democrats are proposing to saddle local airports, farmers and ranchers, water utilities, and countless small businesses with billions of dollars in liability,” Barrasso said. “This is what happens when the House rushes legislation and ignores the committee process. Their proposal won’t become law.”

We are living a nightmare. On July 11, the U.S. Senate approved Peter Wright, President Trump’s nominee to head the EPA’s Office of Land & Emergency Management (OLEM). (52-38) OLEM oversees Superfund cleanups as well as policy related to other waste programs. Wright is a former Dow DuPont attorney and he has spent his career fighting the EPA on behalf of polluters. His priorities do not include protecting the environment. Dow had a long history of misleading the public on dioxin contamination during Wright’s tenure there. Wright held stock in Dow at the time he filed his financial disclosure report.

President Trump says he will veto the House NDAA bill because of provisions that would require the DOD to phase out its use of PFAS-containing AFFF and measures that would force the DOD to address off-site PFAS contamination. We have witnessed this swagger by the Air Force telling states like Michigan that “federal sovereign immunity allows it to disregard the Michigan Department of Environmental Quality’s attempt to force its compliance with a regulation that caps the amount of PFAS chemicals entering surface water.” Representatives Debbie Dingell and Dan Kildee, leaders in the battle to classify PFAS as hazardous substances and invoke Superfund liability, are both from Michigan, a state hit extremely hard by the epidemic.

The psychology of the Trump Administration’s rationale is apparent in this Statement of Administrative Policy :

“Perfluorooctane Sulfonate (PFOS) and Perfluorooctanoic Acid (PFOA) Used on Military Installations – The Administration strongly objects to this provision, which would provide authority to DOD to treat water sources or provide replacement water for agricultural purposes where the water source is “contaminated” with PFOA and PFOS from military activities. Using the EPA drinking water health advisory (HA) to identify areas subject to this section of the bill would be inconsistent with the scientific basis of the HA—it was not constructed to determine unhealthy levels of PFOA/PFOS in water used for agricultural purposes or human health effects from consumption of foods produced using agricultural water containing PFOA/PFOS. Additionally, at potentially great cost to and significant impact on DOD’s mission, the legislation singles out DOD, only one contributor to this national issue.”

This policy will result in unfathomable suffering, death, and environmental calamity. PFOS and PFOA are the two most lethal substances ever developed. They kill forever. They are just two of more than 5,000 closely related chemical structures known as PFAS.

Their words reflect an autocratic mindset.

The DOD would not be “provided authority.” Instead, it would be subjected to law mandating it remediate contaminated water systems across the country. And why the subtle affixing of quote marks when referring to water sources “contaminated” with PFAO and PFAS? This is a wicked use of punctuation.

Certainly, health advisories are promulgated to provide information on contaminants that can cause human health effects and are known to occur in drinking water. Health advisories are non-enforceable and non-regulatory. They’re like a “heads up!” For two generations the military and its corporate poison-suppliers have been aware of the devil’s brew inherent in PFAS. The military and industry should have come clean and conscientious lawmakers should have banned the stuff in the 70’s.

The White House has the audacity to point out the “potentially great cost to and significant impact on DOD’s mission.” They’re putting imperial ambitions before human health. Historians may study these deliberations one day and view them as a monumental turning point in human history. Few are paying attention.