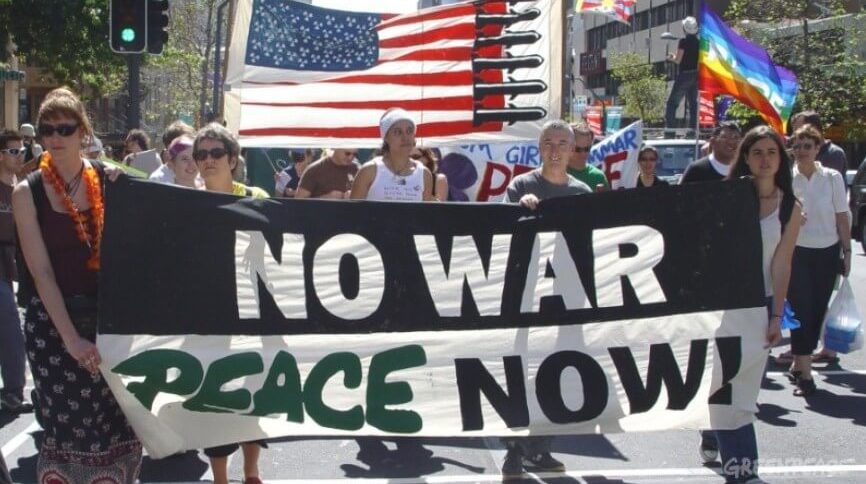 President Trump formally requested the Pentagon to organize a military parade in Washington, DC on November 11, celebrated as Veteran’s Day. However, groups of veterans want to stop the glorification of war and are organizing to reclaim the holiday as Armistice Day. This November is the 100th anniversary of the armistice that ended World War I. We speak with Brian Becker of the ANSWER coalition about the many groups organizing opposition to the military parade and calling for an end to wars at home and abroad. We also speak with Cindy Sheehan about the October Women’s March on the Pentagon, which was organized in response to the Democratic Party-affiliated Women’s Marches that omitted anti-war messages. Both Becker and Sheehan expose the bipartisan nature of the war machine in the United States. Listen here:

Raining on Trump’s Parade: An Interview with Margaret Flowers by Ann Garrison

Cindy Sheehan and the Women’s March on the Pentagon: A Movement, Not Just a Protest by Whitney Webb

Brian Becker. is the National Coordinator of the ANSWER Coalition and a leader of the Party for Socialism and Liberation. Becker has been a central organizer of the mass anti-war demonstrations that have taken place in Washington, D.C. over the past decade. He is a convenor of the People’s Congress of Resistance and co-hosts Loud and Clear with John Kiriakou.

Cindy Sheehan is the mother of Specialist Casey Austin Sheehan who was killed in Iraq on 04 April 2004, in the USA’s illegal and immoral occupation for profit and control of natural resources.

Cindy was a liberal Democrat before Casey was killed, but in her quest for answers as to why her son was killed and why the people who were responsible for his death were not held accountable, Cindy has had a political transformation that eventually led her to Revolutionary Socialism as the solution to the Imperialist/Capitalist two-party stranglehold on not only US politics, but, by extension, the world.

Cindy has traveled all over the world and has seen Socialism in practice and is convinced that a new world is not only possible, but also practical and desirable.

In 2008, Cindy Sheehan, challenged then House Speaker, Nancy Pelosi (D-CA) for her Congressional seat, and although a political novice and independent, Sheehan received 2nd place in a field of seven with almost 50,000 votes. Pelosi had not seen such a fierce challenger before and has not been challenged to such a successful degree, since.

Cindy’s platform called for, among other things: end to all wars and profound reduction of US military bases around the world; nationalization of banks and the Federal Reserve; single-payer health care; heavily subsidized education from Pre-School through University; electoral reform; democratization of the economy and the work place; decriminalization of marijuana and the end to the Federal Government’s drug wars and harassment of California’s growers and medicinal dispensaries; sustainable and renewable energy free from fossil fuel production and usage; freedom of political prisoners held in US prisons; and much more. Sheehan had a labor platform that was hailed by workers all over the world.

Cindy learned a lot from that campaign and she has no delusions or illusions about the current US paradigm, but Cindy believes in Roseanne Barr’s commitment, intellect and heart and is honored by the nod and excited to have a larger platform to talk about peace and Socialist Revolution. Sheehan has been a registered member of the Peace and Freedom Party since 2009.

Sheehan has published seven books, is the host and director of Cindy Sheehan’s Soapbox Radio Show. Cindy still travels the world working for peace and justice and her home base is Vacaville, CA where she loves spending time with her three surviving children and four grandchildren.

Cindy is here for the long haul to insure her grandbabies and all the grandbabies of the world have a sustainable and peaceful future.