Once again this year, the clear winner, in not just women’s soccer and incarceration, but also in militarism, is the United States of America, sweeping nearly every category of military insanity with seemingly effortless ease. Find all of last year’s and this year’s maps here: bit.ly/mappingmilitarism

In the area of money spent on militarism, there was really no competition: 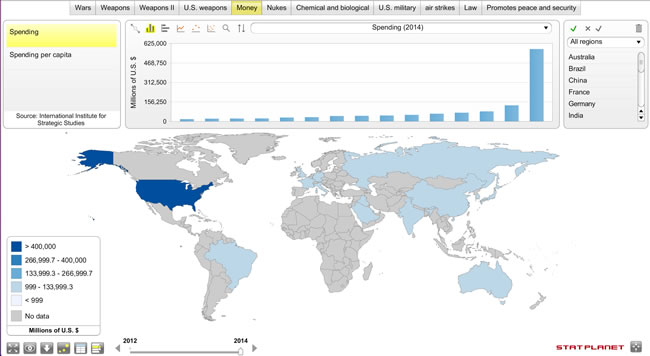 Troops in Afghanistan have declined, but there remains no question which nation still has the most.

There are more major wars in the world now than a year ago, but only one nation is involved in some significant way in all of them.

When it comes to weapons sales to the rest of the world, the United States really shines. The other nations should probably be competing in a different league.

In nuclear weapons stockpiling, Russia makes an amazing showing, nudging out the U.S. for the lead, just like last year, even as both nations’ stockpiles have slightly diminished, and both nations have announced plans to build more. No other nation even makes it on the chart.

Among nations with other WMDs, such as chemical and biological weapons, the United States is right in there.

But it’s really in the reach of its military presence that the United States makes every other nation look like amateur killers. U.S. troops and weapons are everywhere. Check out the maps.

We’ve added a map showing the nations receiving the greatest number of U.S. and allies’ air strikes, and we’ve updated the count of drone murders in each country being regularly droned.

Further maps display which nations are taking steps to facilitate peace and prosperity. The United States’ ability to fail so stunningly in these categories while excelling in the others is the mark of a true champion war monger.

A picture is worth 1,000 words. Adjust the settings to make your own maps of militarism here.