In This Disaster We Are All, Ultimately, Guilty 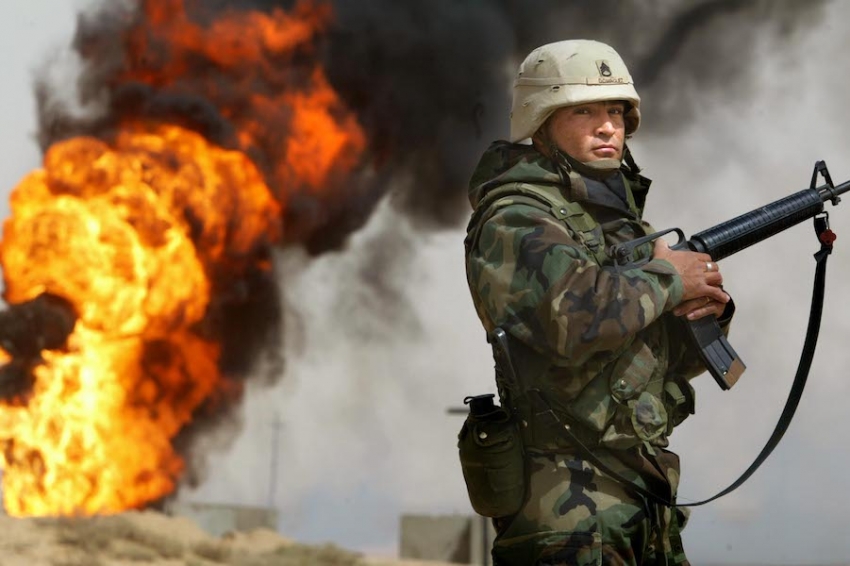 One of my favorite blogs is that of Caitlin Johnstone. Why have I never written about how great it is? I’m not sure. I am too busy to write about most things. I have invited her on my radio show and had no reply. I do know that one of my favorite things to do is also one of hers: correct the mistakes of others. I like to correct my own mistakes too, of course, but it’s not as much fun, and only seems useful to write about when my mistake is shared by millions. I think Ms. Johnstone has now made, in her own talented way, a mistake shared by millions in a post called “In This Disaster We Are All, Ultimately, Innocent,” and I think it’s possibly a horribly dangerous one.

I remember somebody calling Jean-Paul Sartre the last great intellectual who would freely discuss any topic, whether he knew anything about it or not. This sounds like a bit of an insult, but it can be read as praise if understood to mean that, while recognizing what he didn’t know, Sartre was always able to offer wise thoughts brilliantly expressed. This is what I enjoy about bloggers like Johnstone. Some people you read because they have a certain expertise or background or official position. Others you read because they simply have the ability to observe current events and pull out the crucial trends that are often missed or, in many cases, censored — including self-censored. I’m afraid, however, that Sartre would have despaired over Johnstone’s latest.

I take the basic point of much of Sartre’s writing to have been to stop making lame excuses and accept responsibility. You cannot evade choices or claim that someone else made them. God is dead and rotting along with Spirit and Mystical Power and Karma and the pull of the stars. If you as an individual do something, it’s on you. If a group of people as a group do something, it’s on them or us. You cannot choose to fly or see through walls; your choices are limited to the possible. And honest debates can be had around what is possible, on which I might not always have agreed with Sartre. Honest debates can certainly be had over what is wise and good, on which I would most certainly have often vigorously disagreed with Sartre. But within the realm of what is possible, I — and every possible human meaning of “we” — are 100% responsible for our choices, for better or worse, for credit and blame.

I take the basic point of Johnstone’s latest blog to be that people are no more responsible for “sliding toward annihilation via nuclear armageddon or environmental disaster” than is a heroin addict for seeking out heroin. My response is not that the heroin addict damn well is responsible because he or she got hooked or because Sartre proved it with very long words. Addiction — to whatever extent its causes are in the drug or in the person — is real; and even if it weren’t, it could be treated as real for the sake of this argument in which it is just an analogy. My concern is with the notion that humanity has no control over its behavior and therefore no responsibility for it, or as Johnstone puts it:

“Human behavior likewise is driven by unconscious forces on the collective level, but instead of early childhood trauma we’re talking about our entire evolutionary history, as well as the history of civilization. . . . That’s all negative human behavior ultimately is: mistakes that were made due to a lack of consciousness. . . . So we’re all innocent, in the end.” This is of course patent nonsense. People knowingly make bad choices all the time. People act out of greed or malice. They have regret and shame. Every bad deed is not done unwittingly. I can’t picture Johnstone doing anything other than laughing at the excuse that George W. Bush, Colin Powell, and gang didn’t “knowlingly lie.” Not just because we have them on record saying they knew the truth, but also because the very concept of lying wouldn’t exist without the phenomenon of knowingly telling falsehoods.

Johnstone tells a tale of the rise of “civilization” as if all of humanity were now and had always been one culture. This is a comforting fantasy. It’s nice to look at current or historical human societies that live or lived sustainably or without war and suppose that, given time, they’d behave exactly like Pentagon employees. It’s in their genes or their evolution or their collective unconscious or something. Of course that’s possible, but it’s highly unlikely and most certainly not supported by any evidence. The reason to read The Dawn of Everything by David Graeber and David Wengrow is not that they necessarily got every speculation perfect, but that they made the overwhelming case — long since made by Margaret Meade — that the behavior of human societies is cultural and optional. There’s no predictable chain of progress from primitive to complex, monarchy to democracy, nomadic to stationary to hoarders of nuclear weapons. Societies have, over time, moved back and forth in every direction, from small to large to small, from authoritarian to democratic and democratic to authoritarian, from peaceful to warlike to peaceful. They’ve been large and complex and peaceful. They’ve been tiny and nomadic and warlike. There’s little rhyme or reason, because cultural choices are choices dictated to us by neither God nor Marx nor “humanity.”

In U.S. culture, whatever 4% of humanity does wrong is not the fault of that 4% but of “human nature.” Why can’t the U.S. demilitarize like the second-most militarized nation? Human nature! Why can’t the U.S. have healthcare for everyone like most countries have? Human nature! Generalizing the flaws of one culture, even one with Hollywood and 1,000 foreign bases and the IMF and Saint Volodymyr into the flaws of humanity and therefore nobody’s fault is just not worthy of anti-imperial bloggers.

We didn’t have to let an extractive, consumptive, destructive culture dominate the globe. Even a culture only slighty less that way would not have created the current state of nuclear risk and environmental collapse. We could switch to a wiser, more sustainable culture tomorrow. Of course it wouldn’t be easy. Those of us who want to do it would have to do something about the horrible people in power and those who listen to their propaganda. We’d need a lot more bloggers like Johnstone denouncing and exposing their propaganda. But we could do it — there’s nothing to prove we can’t do it — and we need to work at it. And I know that Johnstone agrees that we need to work at it. But telling people that the problem is something other than cultural, telling people the baseless nonsense that it’s just the way the whole species is, does not help.

Just as some of us find it hard to imagine a world without war or murder, some human societies have found it hard to imagine a world with those things. A man in Malaysia, asked why he wouldn’t shoot an arrow at slave raiders, replied “Because it would kill them.” He was unable to comprehend that anyone could choose to kill. It’s easy to suspect him of lacking imagination, but how easy is it for us to imagine a culture in which virtually nobody would ever choose to kill and war would be unknown? Whether easy or hard to imagine, or to create, this is decidedly a matter of culture and not of DNA.

According to myth, war is “natural.” Yet a great deal of conditioning is needed to prepare most people to take part in war, and a great deal of mental suffering is common among those who have taken part. In contrast, not a single person is known to have suffered deep moral regret or post-traumatic stress disorder from war deprivation — nor from sustainable living, nor from living in the absence of nukes.

In the Seville Statement on Violence (PDF), the world’s leading behavior scientists refute the notion that organized human violence [e.g. war] is biologically determined. The statement was adopted by UNESCO. The very same applies to environmental destruction.

Hopefully I’m wrong that telling people to blame all their species, and its history and prehistory, discourages them from taking action. Hopefully this is just a silly academic dispute. But I’m very much afraid that it is not, and that many people — even if not Johnstone herself — who don’t find good excuses in God or “the divine” find a handy excuse for their shabby behavior in taking the flaws of the dominant Western culture and blaming them on grand determinations beyond anyone’s control.

I do not actually care whether people feel innocent or guilty. I have zero interest in getting others or myself to feel shame. I think it can be empowering to know that the choice is ours and that we have a lot more control over events than those in power want us to believe. But mostly I want action and truth and think they can work together, even if only in combination can they set us free.