Evict a Fighter Jet – Not the Unhoused 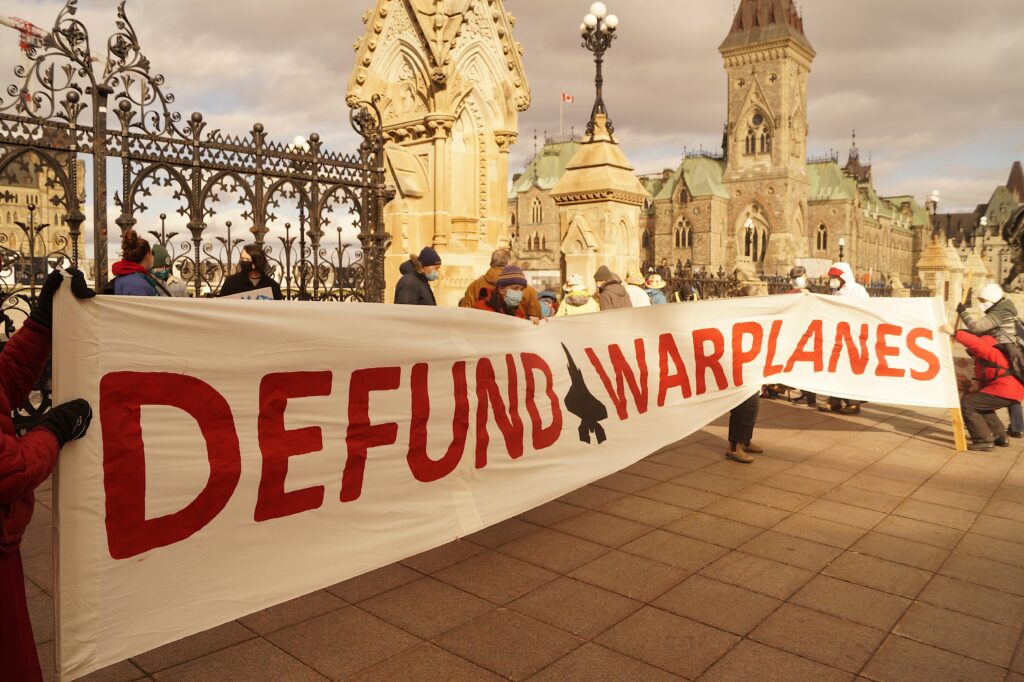 By K.Winkler, Nova Scotia Voice of Women for Peace, January 5, 2023

As the snow flies, Canadian taxpayer money is frozen for secure housing but spending surges for the purchase of fighter jets. Similar to other procurements, the initial cost for this purchase doesn’t tell the whole story. The seven billion dollar deal for 16 F-35’s pushes ahead but the real cost is hidden. The procurement of 15 warships has exceeded five times the initial cost (84.5 billion), yet we hesitate to call out this fiscal and moral irresponsibility. Afterall, what about Putin?

One of the problems facing the procurement of the F-35 fighter jets is the same problem facing more than 235,000 people in Canada: housing. Millions of dollars are already earmarked for housing the jets in state of the art hangers and facilities.

As of December 1st there were more than 700 unhoused Haligonians, and as the Program coordinator for Navigator Street Outreach Program, Edward Jonson recently stated, “If there is no housing or places where people want to live, and can live permanently and securely, we’re just going to see more homeless people.” Across Canada 13% of homeless people are children and unaccompanied youth and in her article, “Homelessness in Canada – What’s going on?” Mila Kalajdzieva reports that across the nation there were 423 emergency shelters in 2019, with 16,271 permanent beds.

Questions about responsible spending are urgent because the cheque book is already out for another multi-billion-dollar proposal to purchase new surveillance aircraft for the Canadian Forces. Even the Minister of Defence, Anita Anand must question whether the Boeing deal can be “sold to the public at a time when there is growing pressure for the federal government to rein in its spending as well as focus on other priority areas like health care.” Let’s give her feedback!

We are spending millions on ‘housing’ jets that we don’t need and that we don’t have at the expense of the people who are here and whose needs we haven’t met. By providing a Housing First approach for those who need housing, we would be in a position to find support and solutions for health and socio-economic circumstances that open the trap door of vulnerability to homelessness. The money is there. Let’s insist that we meet infrastructure targets in Canada before we target infrastructure for destruction elsewhere.

We could attach some conditions to the money spent on buying and housing the fighter jets. Recently, Prime Minister Trudeau tightly clutched the pursestrings for healthcare insisting that withholding funds is the only leverage he has for improvements to the ailing system.

So, let’s use leverage when it comes to military spending.

We can make similar demands, refusing to spend one nickel on fighter jets and their housing until we are all safe and out of the cold. Besides, how did military spending become the golden calf in a nation of peacekeepers?