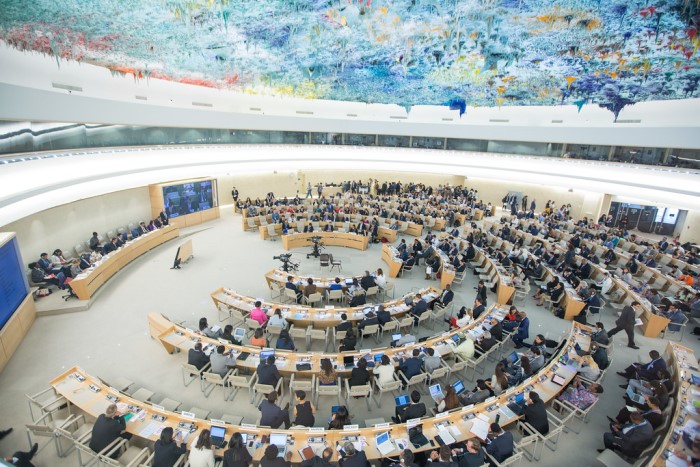 It is no secret that the UN Human Rights Council essentially serves the interests of the Western developed countries and does not have a holistic approach to all human rights.  Blackmail and bullying are common practices, and the US has proven that it has sufficient “soft power” to cajole weaker countries. It is not necessary to threaten in the chamber or in the corridors, a phone call from the Ambassador suffices.  Countries are threatened with sanctions — or worse —  as I have learned from African diplomats.  Of course if they abandon the illusion of sovereignty, they are rewarded by being called “democratic”. Only major powers can afford to have their own opinions and to vote accordingly.

Back in 2006 the Commission on Human Rights, which had been established in 1946, adopted the Universal Declaration of Human Rights and numerous human rights treaties, and established the system of rapporteurs, was abolished. At the time I was surprised by rationale of the General Assembly, because the reason adduced was the “politicization” of the Commission. The US unsuccessfully lobbied for the creation of a smaller commission composed only of countries that observed human rights and could pass judgment over the rest.  As it turned out, the GA established a new body of 47 member States, the Human Rights Council, which, as any observer will confirm, iseven more politicized and less objective than its maligned predecessor.

The special session of the HR Council held in Geneva on 12 May on the Ukraine war was a particularly painful event, marred by xenophobic statements in violation of article 20 of the International Covenant on Civil and Political Rights (ICCPR). Speakers employed a mean tone in demonizing Russia and Putin, while ignoring the war crimes committed by Ukraine since 2014, the Odessa massacre, the 8 year Ukrainian bombardment on the civilian population of Donetsk and Lugansk, etc..

A quick review of OSCE reports from February 2022 is revealing.  The February 15 report of the OSCE Special Monitoring Mission to Ukraine recorded some 41 explosions in the ceasefire areas. This increased to 76 explosions on Feb 16, 316 on Feb 17, 654 on Feb 18, 1413 on Feb 19, a total of 2026 of Feb 20 and 21 and 1484 on Feb 22. The OSCE mission reports showed that the great majority of impact explosions of the artillery were on the separatist side of the ceasefire line[1].  We could easily make a comparison of the Ukrainan bombardment of the Donbas with Serbia’s bombardment of Bosnia and Sarajevo. But back then NATO’s geopolitical agenda favoured Bosnia and there too the world was divided into good guys and bad guys.

Any independent observer would cringe at the lack of balance displayed in the discussions at the Human  Rights Council on Thursday.  But are there many independent thinkers in the ranks of the “human rights industry” left?  The pressure of “groupthink” is enormous.

The idea of establishing a commission of inquiry to investigate war crimes in Ukraine is not necessarily a bad one. But any such commission would have to be equipped with a broad mandate that would allow it to investigate war crimes by all belligerents — Russian soldiers as well as Ukrainian soldiers and 20,000 mercenaries from 52 countries who are fighting on the Ukrainian side. According to Al-Jazeera, more than half of them, 53.7 percent, come from the United States, Britain and Canada and 6.8 percent from Germany.  It would also be justified to give a mandate to the commission to look into the activities of the 30 US/Ukranian biolabs.

What seems particularly offensive in the “spectacle” of 12 May at the Council is that States engaged in rhetoric contrary to the human right to peace (GA Resolution 39/11)  and to the right to life (art.6 ICCPR).  The priority was not on saving lives by devising ways to promote dialogue and reach a sensible compromise that would usher an end to hostilities, but simply on condemning Russia and invoking international criminal law – of course, exclusively against Russia.  Indeed, the speakers at the event engaged primarily in “naming and shaming”, mostly evidence-free, since many of the allegations were not backed up by concrete facts worthy of a court of law.  The accusers also relied on allegations that Russia had already addressed and refuted. But as we know from the lyrics of the Simon & Garfunkel song “The Boxer”  — “a man hears what he wants to hear, and disregards the rest”.

Precisely the purpose of a commission of inquiry should be to collect verifiable evidence on all sides and to hear as many witnesses as possible.  Unfortunately, the resolution adopted on 12 May does not augur well for peace and reconciliation, because it is woefully one-sided.  For that very reason China departed from its practice of abstaining from such votes and went ahead and voted against the resolution.  It is laudable that the top Chinese diplomat at the UN Office in Geneva Chen Xu, spoke about trying to mediate peace and calling for a global security architecture.  He deplored: “We have noted that in recent years the politicization and confrontation at the [council] has been on the rise, which has severely impacted its credibility, impartiality and international solidarity.”

Far more important than the Geneva ritual exercise in Russia-bashing and the breathtaking hypocrisy of the resolution was another UN meeting, this time at the Security Council in New York on Thursday, 12 May, where the Chinese deputy UN Ambassador Dai Bing argued that anti-Russia sanctions would certainly backfire. “Sanctions will not bring peace but will only accelerate the spillover of the crisis, triggering sweeping food, energy and financial crises across the globe”.

Also at the Security Council, on Friday, 13 Mai, Russia’s Permanent Representative to the UN, Vassily Nebenzia, presented evidence documenting the dangerous activities of some 30 US bio-laboratories in Ukraine[2].  He recalled the Biological and Toxin Weapons Convention of 1975 (BTWC) and expressed his preoccupation over the enormous risks involved in biological experiments carried out in US warfare laboratories like Fort Detrick, Maryland.

Nebenzia indicated that the Ukrainian biolabs were directly supervised by the US Defense Threat Reduction Agency in the service of the Pentagon’s National Center for Medical Intelligence. He confirmed the transfer of more than 140 containers with ectoparasites of bats from a biolab in Kharkov abroad, in the absence of any international control.  Obviously, there is always a risk that  pathogens may be stolen for terrorist purposes or sold in the black market. Evidence shows that dangerous experiments were conducted since 2014, following the Western-inspired and coordinated coup d’état against the democratically elected president of Ukraine, Victor Yanukovych[3].

It appears that the US program triggered a growing incidence of dangerous and economically relevant infections in Ukraine.  He stated “There is evidence that in Kharkov, where one of the labs is located, 20 Ukrainian soldiers died of swine flu in January 2016, 200 more were hospitalized.  Besides, outbreaks of African swine fever occur regularly in Ukraine.  In 2019 there was an outbreak of a disease that had symptoms similar to plague.”

According to the Russian Ministry of Defense reports, the US demanded that Kiev destroy the pathogens and cover up all traces of the research so that the Russian side would not get hold of the evidence of Ukrainian and US violations of article 1 of the BTWC.  Accordingly, Ukraine rushed to shut down all biological programs and Ukraine’s health Ministry ordered the elimination of biological agents deposited in biolabs starting from 24 February 2022.

Ambassador Nebenzia recalled that during hearing of the US Congress on 8 March, Undersecretary of State Victoria Nuland confirmed that there were biolabs in Ukraine where military-purpose biological research had been conducted, and that it was imperative that these biological research facilities “should not fall in the hands of Russian forces.”[4]

Meanwhile, the US Ambassador to the UN Linda Thomas-Greenfield rejected the Russian evidence, calling it “propaganda” and gratuitously alluded to a discredited OPCW report on the alleged use of chemical weapons in Douma by President Bashar Al-Assad of Syria, thus establishing a kind of guilt by association.

At that Security Council session the Chinese Ambassador Dai Bing urged countries retaining weapons of mass destruction (WMDs), including biological and chemical weapons, to destroy their stockpiles:  “We firmly oppose the development, stockpiling and use of biological and chemical weapons by any country under any circumstances, and urge countries that have not yet destroyed their stockpiles of biological and chemical weapons to do so as soon as possible. Any information trail of bio-military activity should be of great concern to the international community.” China called on all concerned parties to respond to relevant questions in a timely manner and make comprehensive clarifications so as to dispel the legitimate doubts of the international community.

Presumably the mainstream media will give abundant visibility to the US and UK statements and blithely ignore the evidence presented by Russia and China’s proposals.

There are more bad news for peace and sustainable development. Bad news for disarmament, in particular nuclear disarmament; bad news for ever increasing military budgets and the waste of resources for the arms race and war.  We have just learned about Finland’s and Sweden’s bid to join NATO.  Do they realize that they are actually joining what could be considered a “criminal organization” for purposes of article 9 of the statute of the Nuremberg Tribunal?  Are they conscious of the fact that over the past 30 Years NATO has committed the crime of aggression and war crimes in Yugoslavia, Afghanistan, Iraq, Libya and Syria?  Of course, NATO has thus far enjoyed impunity.  But “getting away with it” does not render such crimes any less criminal.

While the credibility of the Human Rights Council is not yet dead, we must admit that it is seriously wounded.  Alas, the Security Council does not earn any laurels either.  Both are gladiator arenas where countries are only trying to score points.  Will these two institutions ever develop into civilized fora of constructive debate over matters of war and peace, human rights and the very survival of humanity?

Alfred de Zayas is a law professor at the Geneva School of Diplomacy and served as a UN Independent Expert on International Order 2012-18. He is the author of ten books including “Building a Just World Order” Clarity Press, 2021.