Document Shows CIA Reaction to Finding No WMD in Iraq 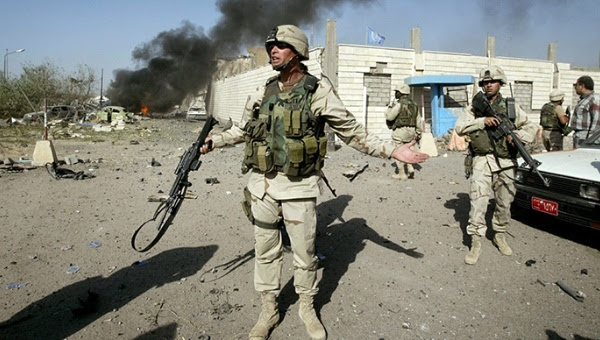 The National Security Archive has posted several newly available documents, one of them an account by Charles Duelfer of the search he led in Iraq for weapons of mass destruction, with a staff of 1,700 and the resources of the U.S. military.

Duelfer was appointed by CIA Director George Tenet to lead a massive search after an earlier massive search led by David Kay had determined that there were no WMD stockpiles in Iraq. Duelfer went to work in January 2004, to find nothing for a second time, on behalf of people who had launched a war knowing full well that their own statements about WMDs were not true.

The fact that Duelfer states quite clearly that he found none of the alleged WMD stockpiles cannot be repeated enough, with 42% of Americans (and 51 percent of Republicans) still believing the opposite.

A New York Times story last October about the remnants of a long-abandoned chemical weapons program has been misused and abused to advance misunderstanding. A search of Iraq today would find U.S. cluster bombs that were dropped a decade back, without of course finding evidence of a current operation.

Duelfer is also clear that Saddam Hussein’s government had accurately denied having WMD, contrary to a popular U.S. myth that Hussein had pretended to have what he did not.

The fact that President George W. Bush, Vice President Dick Cheney, and their team knowingly lied cannot be overemphasized. This group took the testimony of Hussein Kamel regarding weapons he’d said had been destroyed years ago, and used it as if he’d said they currently existed. This team used forged documents to allege a uranium purchase. They used claims about aluminum tubes that had been rejected by all of their own usual experts. They “summarized” a National Intelligence Estimate that said Iraq was unlikely to attack unless attacked to say nearly the opposite in a “white paper” released to the public. Colin Powell took claims to the U.N. that had been rejected by his own staff, and touched them up with fabricated dialogue.

Senate Select Committee on Intelligence Chairman Jay Rockefeller concluded that, “In making the case for war, the Administration repeatedly presented intelligence as fact when in reality it was unsubstantiated, contradicted, or even nonexistent.”

On January 31, 2003, Bush suggested to Blair that they could paint an airplane with U.N. colors, fly it low to get it shot at, and thereby start the war. Then the two of them walked out to a press conference at which they said they would avoid war if at all possible. Troop deployments and bombing missions were already underway.

When Diane Sawyer asked Bush on television why he had made the claims he had about Iraq’s supposed weapons of mass destruction, he replied: “What’s the difference? The possibility that [Saddam] could acquire weapons, if he were to acquire weapons, he would be the danger.”

Duelfer’s newly released internal report on his hunt, and that of Kay before him, for the figments of propagandists’ imagination refers to “Saddam Hussein’s WMD program,” which Duelfer treats as an on-again, off-again institution, as if the 2003 invasion had just caught it in one of its naturally cyclical low tides of non-existence. Duelfer also describes the nonexistent program as “an international security problem that vexed the world for three decades,” — except perhaps for the part of the world engaged in the largest public demonstrations in history, which rejected the U.S. case for war.

Duelfer openly states that his goal was to rebuild “confidence in intelligence projections of threat.” Of course, having found no WMDs, he can’t alter the inaccuracy of the “projections of threat.” Or can he? What Duelfer did publicly at the time and does again here is to claim, without providing any evidence for it, that “Saddam was directing resources to sustain the capacity to recommence producing WMD once U.N. sanctions and international scrutiny collapsed.”

Duelfer claims that former Saddam yes men, rigorously conditioned to say whatever would most please their questioner, had assured him that Saddam harbored these secret intentions to start rebuilding WMD someday. But, Duelfer admits, “there is no documentation of this objective. And analysts should not expect to find any.”

So, in Duelfer’s rehabilitation of the “intelligence community” that may soon be trying to sell you another “projection of threat” (a phrase that perfectly fits what a Freudian would say they were doing), the U.S. government invaded Iraq, devastated a society, killed upwards of a million people by best estimates, wounded, traumatized, and made homeless millions more, generated hatred for the United States, drained the U.S. economy, stripped away civil liberties back home, and laid the groundwork for the creation of ISIS, as a matter not of “preempting” an “imminent threat” but of preempting a secret plan to possibly begin constructing a future threat should circumstances totally change.

This conception of “preemptive defense” is identical to two other concepts. It’s identical to the justifications we’ve been offered recently for drone strikes. And it’s identical to aggression. Once “defense” has been stretched to include defense against theoretical future threats, it ceases to credibly distinguish itself from aggression. And yet Duelfer seems to believe he succeeded in his assignment.