Dark Side of Mr. Moon 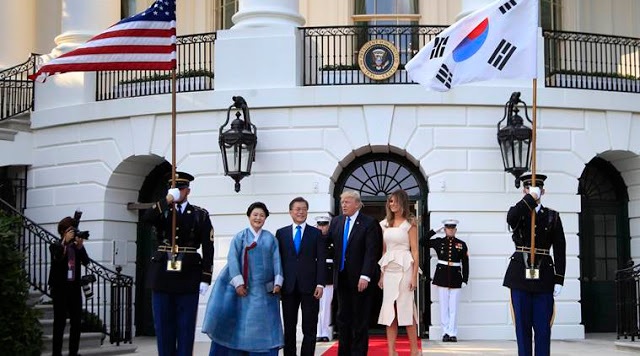 Activists in South Korea were excited and fairly optimistic that the election of liberal President Moon Jae-in might help deescalate tensions on the peninsula.  They hoped that he would block further deployments of the provocative THAAD (Terminal High Altitude Area Defense) missile defense system and even demand that the US pull back the two THAAD launch units that were rushed into Seongju (186 miles south of Seoul) during the middle of the night just prior to his recent election.

But it did not take long for the US to establish who is boss on the Korean peninsula as Moon last week ordered his aides to start discussions with their U.S. counterparts on deploying four additional mobile launchers for the THAAD, going back on his decision that the Korean government would delay additional deployment plans by 10 to 15 months.

Moon said South Korea and the US will engage in a “much stronger show of military force”.  On Moon’s decision to deploy four additional mobile launchers, his aides said it would be a “temporary deployment.”

It’s rather difficult to see much difference between Moon’s current collusion with the US and that of the previous right-wing President Park who was impeached just months ago.  The candlelight revolution in South Korea, which was the force that pushed Park out of the Blue House, has to be terribly disappointed in these recent pronouncements by Moon.

One person who is not disappointed about Moon’s turn toward the dark side is Japanese Prime Minsiter Shinzo Abe (the grandson of a former WW II fascist leader in the imperial Japanese war cabinet who China considered a “Class A war criminal.”) The Japanese peace movement today considers Abe a fascist.

Abe has reported that in a conversion with Donald Trump the US warmonger vowed to take “all necessary measures” to protect Japan and other US allies after last week’s North Korean missile test.  The US and Japan are describing that missile as an intercontinental ballistic missile (ICBM) while Russia has said it was a mid-range missile that could not reach the US.

The test was reason enough for the US to send two nuclear B-1 bombers over the Korean peninsula. The commander of the Pacific air forces, General Terrence O’Shaughnessy, warned his units were ready to hit North Korea with “rapid, lethal, and overwhelming force”.

In other words the US is ready to initiate nuclear war.

It’s heart breaking to see Mr. Moon turn away so quickly from his earlier promises to reconsider THAAD and to so eagerly embrace the US incessant prodding of North Korea.  The US-South Korea war games right along the border of North Korea must always make Pyongyang wonder if this is the one – is this the time the US and South Korea will launch their often threatened ‘decapitation’ strike?

I can only hope that the activist community in South Korea and in the west will forget about giving Mr. Moon a honeymoon.  It’s rather clear already that he intends to follow orders from Washington and continue the role of Seoul as a junior partner to the US imperial war project in the Asia-Pacific.

China, Russia and North Korea be warned and watch out….