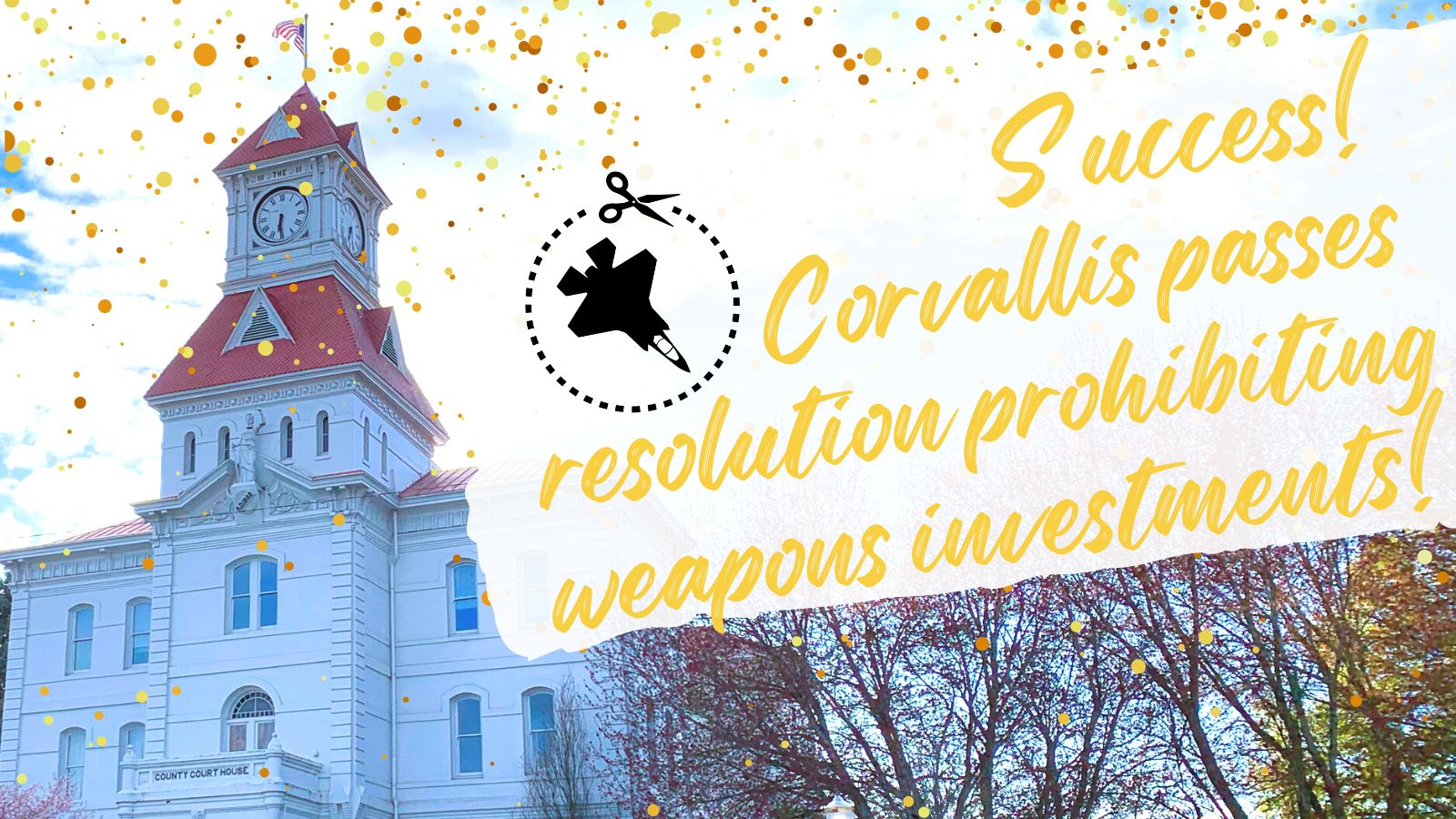 CORVALLIS, OR: On Monday, November 7, 2022, the Corvallis City Council unanimously passed a resolution to prohibit the city from investing in companies which produce weapons of war. The resolution passed following years of advocacy work by the Corvallis Divest from War coalition, including an initial hearing in February 2020 that did not lead to a vote. A video recording of the November 7, 2022 City Council meeting is available here.

The City of Corvallis joins New York City, NY; Burlington, VT; Charlottesville, VA; Berkeley, CA; and San Luis Obispo, CA, among other cities in the U.S. and worldwide, in committing to divest public funds from weapons of war. While Corvallis does not currently hold investments in weapons manufacturers, the passage of this resolution marks a significant commitment for the city to support peace and life-affirming industries in all future investments.

“I want to help create a better world that can live constructively. The human gift of the capacity for problem-solving needs to be nurtured more than war’s vast infrastructure […] We must think our way there together. This Divest from War Resolution is a way for us to practice imagining new futures as a community,” said Linda Richards, Divest Corvallis member and professor of history at Oregon State University.

The Divest from War resolution builds off of the momentum of Corvallis’ robust peace and climate justice movements. In the public comment section of the November 7 meeting, coalition member and former Ward 7 councilor Bill Glassmire spoke about the 19 year-long daily peace vigil held in Corvallis by late activist Ed Epley, which eventually led to the formation of the Corvallis Divest from War coalition. The resolution honors this legacy by including historical warnings about U.S. militarism from Dwight Eisenhower, Martin Luther King Jr., and Winona LaDuke. The Divest from War coalition also bases its work in the climate justice movement, citing that the U.S. military is the biggest institutional producer of greenhouse gasses in the world.

“It’s estimated that the U.S. military emits more carbon dioxide into the atmosphere than entire countries, like Denmark and Portugal,” said Barry Reeves, a member of Buddhists Responding – Corvallis. “It is important for us, as a part of civil society, and for those of us in the council of government, to respond and begin the transformation to a sustainable future. May we remember that the journey of a thousand miles begins with the first step. And this resolution can be seen as a first step,” he added.

For more info or to join the Corvallis Divest from War coalition, contact corvallisdivestfromwar@gmail.com.