COP27 Side Event: Dealing with Military and Conflict Related Emissions Under the UNFCCC 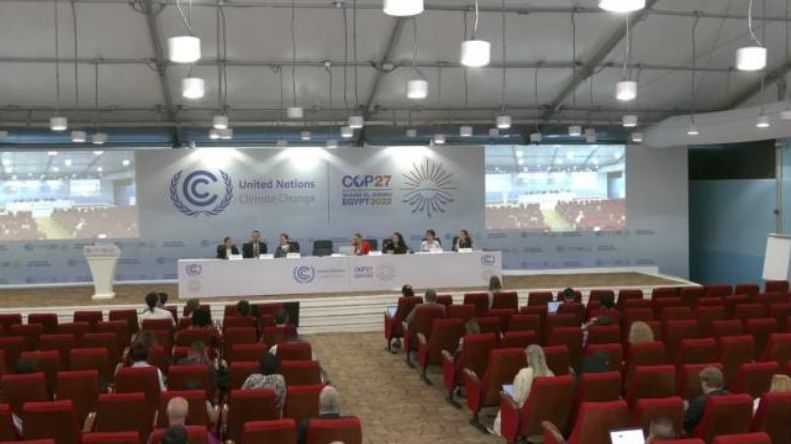 As part of a groundbreaking Blue Zone Side Event at COP27 on dealing with military and conflict related emissions under the UNFCCC, TPNS was invited to speak on the civil society perspective. It was organised by Ukraine and supported by CAFOD.  TPNS joined their colleagues at Perspectives Climate Group, who presented our joint publication Military and Conflict-Related Emissions: Kyoto to Glasgow and Beyond. 150 attended the event, including national media from Germany, Switzerland Bloomberg and AFP.  Deborah Burton was also able to reference some of the findings of their joint-publication published Nov 10th with TNI and Stop Wappenhandel: Climate Collateral- How Military Spending is accelerating Climate breakdown.

Greenhouse gas emissions from operations of the military in peacetime and war are significant, reaching up to hundreds of million t CO2. The event discusses how this so far ignored issue can be dealt with under the UNFCCC and the Paris Agreement.

Question: Thank you very much for the panel. My question is kind of leaning towards the next steps, but more just bringing the conversation further than just greening the military. Because with everything that we are counting emissions for, we’re having that conversation of not just reducing emissions, but changing the way we operate. And I like the fact that we spoke about not just what the military operation is doing, but also the fires that are caused and thinking about the rebuilding. So there’s a conversation that we need to have that’s further than just how much is the military admitted, but climate change is not a threat to our way of life, it’s a consequence of that. And that way of life is also over-dependency on militarized forces both the aggressor and also the victims of such and like Axel had said, so many other communities have been having similar issues. And it’s only just getting into the conversation. So now that we have the limelight on this, how’re your communities calling for more than just counting, but also just how our over-dependency on militarized forces to respond to multiple issues, including climate change that is being caused by the military, is missing the point in terms of where we need to move as a society? If we really want to address climate change? How are your communities using this opportunity to take that conversation further?

Deborah Burton (of Tipping Point North South):  I think you’ve sort of hit the nail on the head, really. I mean, we know we have to, and we are struggling. We’re pushing for a complete transformation of our economies. The IPCC, just recently, I think, talked about Degrowth. I don’t hear degrowth mentioned half as much as it should be. We absolutely need a parallel transformation of how we think about foreign and defense policy, how we do international relations, in the face of three degrees.

You know, in the next seven years, we have to get to 45% reduction. By 2030. In those seven years, we will spend at least $15 trillion on our militaries. And there’s a whole other conversation around, the militaries are looking to securitize the climate  changes. We need to start thinking some very, very big ideas about where the hell are we going as a species. We haven’t even begun to thinking about where we are going with international relations. And while there is always a logic for how we got to where we are. Of course, we can see how we got to where we are. We’re moving in completely the wrong direction for 21st and 22nd centuries.

We don’t even use the word security at our small organization. We’re calling it human safety. We are calling for a transformation of defense in favor of sustainable human safety. And that absolutely doesn’t mean that people and countries do not have a right to defend themselves. They absolutely do. That is the number one charge against any government. But it’s how do we move away from 19th and 20th century framing? Of how we do business as as a species, as humanity? How do we move that debate forward?

And I just have to say that everything that’s going on here today, you know, as a small, very small civil society organization, a year ago, we were wanting to be on the COP27 agenda somewhere. We didn’t think that we would be here and it’s this terrible invasion of Ukraine that has brought the oxygen of publicity to this issue. But we do have a framework, we have a roadmap in terms of getting it on the agenda. And maybe by getting it onto the agenda, these other conversations and these bigger ideas will start to happen.